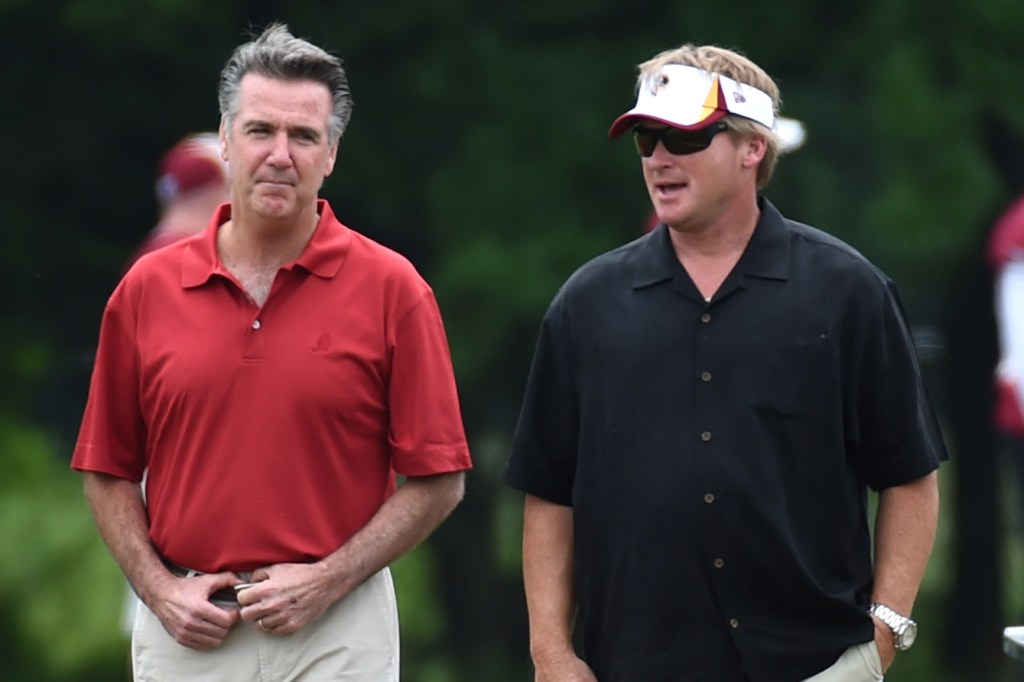 
Jon Gruden resigned as Raiders coach on Monday night after a slew of emails in which he used misogynistic and homophobic language emerged in a report from the New York Times. Here is everything you need to know about the controversy that took down Gruden.

1. Why was the NFL investigating Jon Gruden?

During a probe into allegations of workplace misconduct in the Washington Football Team organization and their owner Daniel Snyder, NFL investigators discovered an email Gruden had sent to former Washington team president Bruce Allen. Gruden wrote that NFL Players Association president DeMaurice Smith, who is black, had “lips the size of michellin [sic] tires.”

A probe was launched after the Washington Post reported allegations from 40 women who said they were harassed or verbally abused as team employees. The NFL fined the Washington Football Team $10 million for fostering a toxic culture. Snyder was not suspended. As part of the investigation, the NFL examined over 650,000 emails.

3. Who else could be in trouble?

Anyone and everyone who engaged Gruden in his anti-gay, misogynist and sexist emails. The New York Times’ latest report has Gruden sharing numerous pictures of Washington Football Team cheerleaders – reportedly wearing nothing but bikini bottoms – to other men associated with the NFL, including former NFL executive Bruce Allen.

4. How much of his salary does Gruden keep?

Gruden was in the fourth year of a 10-year, $100 million contract that could include a morals clause. He stands to forfeit more than $60M.

If he does, it won’t be for a while. It certainly won’t be until he has shown that he has reformed through actions, and it is impossible at the moment to think it will be as a head coach.

Gruden was a star analyst on ESPN’s “Monday Night Football,” and again, over time, he could be given a second chance in a country that often embraces second chances.

Rangers could trade Vitali Kravtsov with tensions rising over demotion