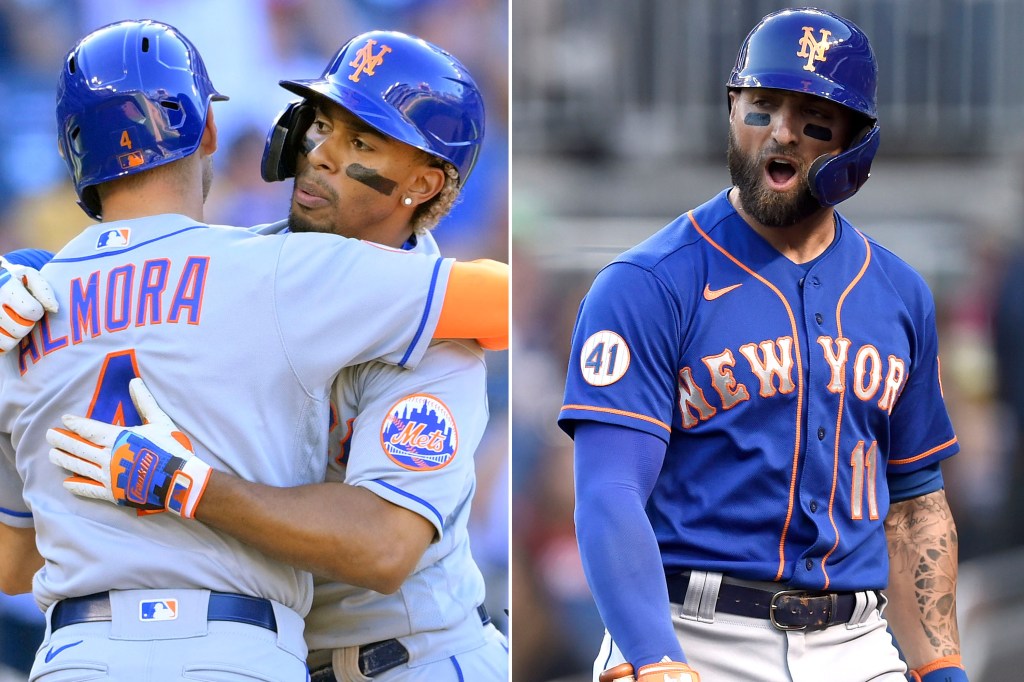 
WASHINGTON — For a break-even Saturday, it sure seemed like a lost day for the Mets.

There was the nine-run lead they squandered in Game 1 of a doubleheader against the Nationals and the added energy and relievers needed to rally for an extra-inning win. There was Brandon Nimmo’s strained right hamstring that placed him on the injured list. Finally, there was a clunker in the nightcap, in which the Mets were mostly flat.

They left Nationals Park with their seven-game winning streak caput, after a 4-3 loss in the nightcap pushed them back to .500.

Hours earlier, the Mets had used Francisco Lindor’s two-run homer in the ninth inning to win 11-9 — having survived the added drama of Andrew Stevenson’s game-tying blast in the seventh against Seth Lugo, erasing the last of what had been a 9-0 lead.

Nimmo strained his right hamstring running the bases in the second inning of the first game and was placed on the 10-day injured list before the nightcap, depriving the Mets of a top offensive performer. Kevin Pillar and Albert Almora Jr. will assume the center-field duties.

Pillar delivered a two-run homer in the sixth inning of the nightcap to get the Mets close after Tylor Megill turned in a mediocre performance.

The rookie right-hander allowed four earned runs on seven hits over six innings, with two home runs allowed. Alcides Escobar’s two-run blast in the fifth, which widened the Mets’ deficit to 4-1, was the big jolt.

Lindor and Javier Baez were both on the bench for the nightcap. Both entered as pinch hitters in the seventh inning and were retired. With the tying run at second base, Pete Alonso was caught looking at strike three against Kyle Finnegan to end it.

In the first game, Lindor went deep against Finnegan for the 150th home run of his career. It was his first homer since returning from the injured list on Aug. 24 after missing five weeks with an oblique strain. Heath Hembree recorded the final three outs for the save.

“There wasn’t too much relief because we still needed to close out the last inning,” Lindor said of his homer. “There was excitement, because I did something to help the team score a couple of runs and I knew if we won I had a chance of getting the belt.”

That victory belt, awarded to the Mets’ player of the game following a win, rested on Lindor’s left shoulder as he conducted a postgame Zoom interview.

Lugo allowed a Carter Kieboom double with one out to begin the Nationals’ seventh-inning rally before retiring Luis Garcia and surrendering the blast to Stevenson.

Lugo was pitching for a second straight day, after working a scoreless seventh on Friday. The Mets have chosen their spots throughout the season for letting the right-hander work consecutive days because of his troubles on occasion rebounding without rest. Edwin Diaz, according to manager Luis Rojas, was unavailable.

“We trust our bullpen and everyone that got the ball in a big situation we trusted was going to get out of it,” Rojas said. “[F]or the last month or so [Lugo] has been throwing the ball so well, you have got to trust he is going to shut the door there.”

It started to get dicey for the Mets in the sixth, when the Nationals scored four times and put the tying runs on base before Brad Hand got Ryan Zimmerman to hit into an inning-ending double play. Miguel Castro allowed four runs (one was unearned following errors by Lindor and Alonso) before Hand, in his Mets debut, escaped.

The Mets handed Marcus Stroman a 9-0 lead in the fourth inning and watched the right-hander roll. Overall, he allowed three earned runs on six hits and three walks over six innings. Stroman allowed four straight batters to reach base in the fourth, leading to the Nationals’ output against him.

Stroman’s athleticism was on full display in the fourth, when he raced to third base, which was uncovered, and received Baez’s throw to nail Juan Soto. On the play, Jonathan Villar dropped Lindor’s flip to second base on Yadiel Hernandez’s grounder into the shift. Baez picked up the ball and threw to Stroman streaking to third.

The Mets sent nine batters to the plate and scored four runs in the second inning to take a 6-0 lead. Baez homered leading off the inning — his fifth blast in 22 games since joining the Mets — and two Washington errors (plus a mental miscue) contributed heavily to the outburst.

After Escobar booted consecutive grounders for errors, Stroman’s sacrifice bunt moved the runners. Villar followed with a grounder to the pitcher, but with the infielders charging, first base was left uncovered. Villar was awarded a gift RBI single that extended the Mets’ lead to 4-0. Before the inning was complete, Nimmo stroked an RBI single and Lindor brought in another run with a sacrifice fly.

The Mets jumped on Erick Fedde with three straight singles to open the game and took a 2-0 lead. Villar, Nimmo and Lindor singled in succession for the first run before Alonso’s sacrifice fly brought in another.

Patrick Mazeika’s RBI single in the third gave the Mets a 7-0 lead after Baez’s double leading off the inning. Michael Conforto launched a two-run homer in the fourth that extended the lead to 9-0.

Angelina Jolie: I feared for safety of my children and family while married to Brad Pitt