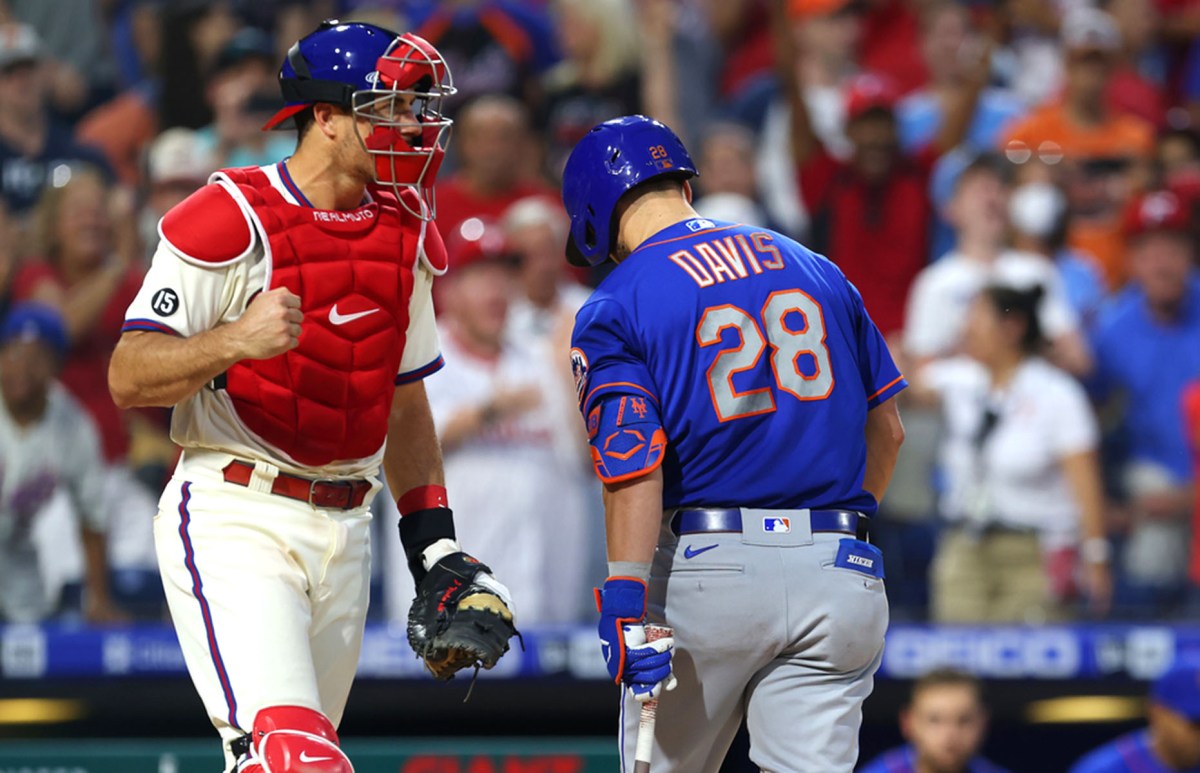 In French, that translates to “Les Miserables.”

At least they mixed up their brand of misery Saturday at Citizens Bank Park?

Oh, the Mets lost yet again, 5-3 to Joe Girardi’s Phillies at their former happy place, to fall 1 ½ games out of the division penthouse. That’s three straight defeats, six in seven tries and 8 of 10. Yeesh.

Yet after a lifeless first 17 innings of this crucial series, the Mets woke up in the top of the ninth by slamming three straight solo homers (Michael Conforto, Jonathan Villar and James McCann) and bringing the go-ahead run to the plate with one out, only for new Philadelphia closer Ian Kennedy to put out the fire by striking out Pete Alonso and J.D. Davis.

After the game, manager Luis Rojas said, “We’ve got to win tomorrow,” and that’s a heck of a mandate to put on this series finale against old pal and new All-Star Zack Wheeler.

More than anything, these Mets, the trade deadline past them and neither Jacob deGrom nor Francisco Lindor anywhere close to returning, need to rediscover their joy for the game that emerged for a glimpse before the Mets’ all-time record at CBP fell to 87-77 (thanks to Ultimate Mets Database for that tidbit).

That assignment falls on Rojas as well as his veteran players.

“There has to be a sense of urgency,” McCann acknowledged.

The late rally shed new light on the decision by Rojas to stick as long as he did with his rookie starting pitcher Tylor Megill, who, after a strong first four innings, started the fifth by surrendering a 437-foot homer to Brad Miller, breaking the scoreless tie, then allowing two of the next three batters to reach base safely. Odubel Herrera then smoked a first-pitch fastball 434 feet into the second deck in right-center, putting his guys up by a 4-0 margin and punctuating his power display with a beautiful bat flip; the Phillies, winners of seven straight, are having fun, unlike their foes.

“He only had given up one run at the time,” Rojas said of Megill. “He was throwing the ball really good throughout the game. For me, he’s getting out of that inning. I don’t think the kid was gassed, necessarily.”

Eh. The fifth inning sure seems like Megill’s nemesis; the right-hander’s fifth-inning ERA now stands at 11.57.

Maybe the Mets’ manager got punch-drunk from watching his hitters do so little. Rojas understandably stacked his starting lineup with righty bats, leadoff guy Brandon Nimmo the lone exception, to go after Philadelphia southpaw starter Ranger Suarez. But Suarez proceeded to hold that group hitless (with three walks) through his 2 ²/₃ innings — at which point Girardi pivoted to righty rookie J.D. Hammer, who scattered two hits while picking up eight outs. So it went for the Mets, until their dead-cat bounce in the ninth. It proved fitting that Kennedy fanned both Alonso and Davis on fastballs, the club’s downfall of late.

“Throughout the game, we had a bunch of swings and misses on fastballs,” Rojas said. “That’s the pitch we’ve got to be ready for all of the time.”

So it goes for these guys, who have 52 games left to pick up their energy, start showing more fight — earlier and more consistently — and win back the goodwill they had captured in their first half.

“Baseball season’s not easy,” Rojas said, echoing sentiments that he said were voiced by some of his players in the clubhouse after the game. “Nobody expected it to be easy.”

Even in the toughest times, though, the Mets have to make baseball season fun. At the moment, they are failing miserably.