Mets keep pulling their fans back for more 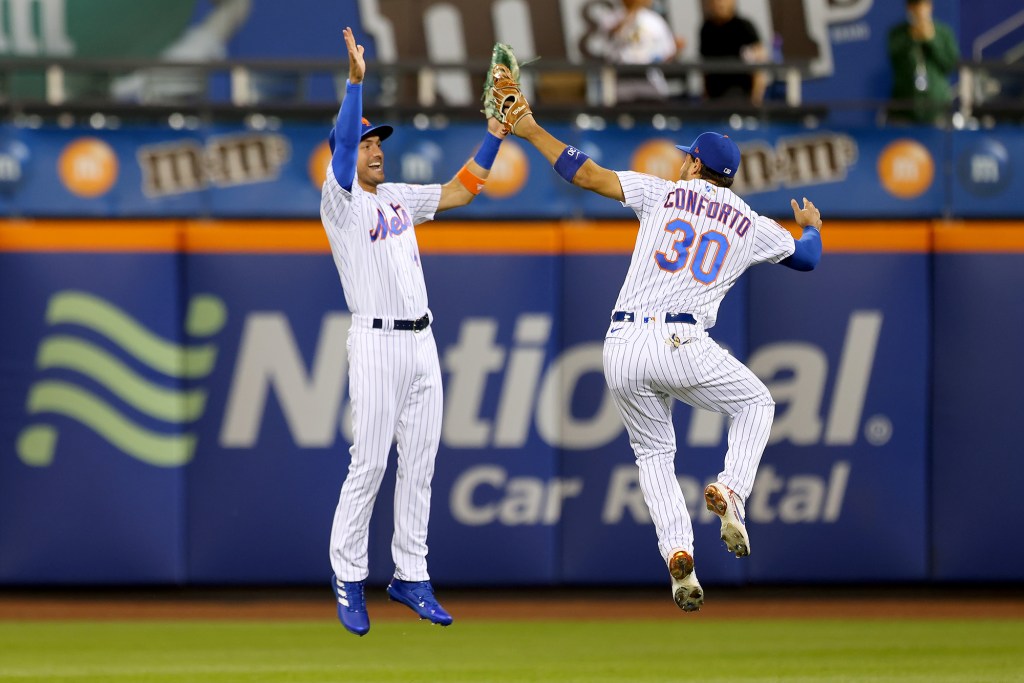 For lack of a better word, let’s make one up that quintessentially applies to the 2021 New York Mets. What they have done better than just about any team in recent memory around here, any sport, is this:

Even if you are not an aficionado of the “Godfather” trilogy, you surely know what this means. Right in the middle of Part III, Al Pacino as Michael Corleone utters the most famous of all the lines Mario Puzo and Francis Ford Coppola ever typed on his behalf:

“Just when I thought I was out … they pull me back in!”

Are you back in yet? Do you dare? Have you moved past the thumbs-down brouhaha, past acting GM Zack Scott’s 4 a.m. misadventures, past all the times this year when you were out … until you weren’t? Until they pulled you back in. Better or worse.

“It’s always good to get some wins,” said Dom Smith after the Mets won again Thursday night, 4-3, over the Marlins at Citi Field with Smith driving in the winning run in the bottom of the seventh inning off hard-luck Miami starter Sandy Alcantara. “Can’t wait to get to D.C. to keep it going.”

OK. Let’s not ignore the 10,000-pound elephant in the room. What the Mets are doing now is feasting on tomato cans, beating up the Nationals and the Marlins, the dregs of the NL East. They are doing the bare minimum right now, and they will be asked to do the bare minimum across the next week, too, eight games in DC and Miami between now and the Yankees’ arrival at Citi Field on Sept. 11.

But you know who else has feasted on those patsies?

The Phillies have. The Braves have, both during the Mets’ 13-game stretch against the Dodgers and Giants that threatened to boot the Mets’ season all the way to Siberia.

It’s the Mets’ turn now. And yes: there are still plenty of varsity games awaiting against the likes of the Yankees, Brewers, Cardinals and Red Sox. And we just saw what happens when the Mets try to match up with better teams. But they’ll worry about that when they have to.

The Mets are three games behind the Phillies for second place, and still have three more games with them at Citi Field. The Mets are five behind the Braves for first, after the Braves’ comeback win over the Rockies at Coors Field on Thursday night. All they want, all they can ask, is to control their own destiny.

They already have that against the Phillies, scorching hot as they’ve been. While the Mets waited for the outcome in Denver, they’d shaved four full games off the Braves’ lead since Saturday. What they need is to get it to three, minimum, heading into Atlanta the final weekend of the season.

Then you take your chances.

And sure: if you aren’t buying into any of this, that’s understandable. The Mets have michaelcorleoned you plenty already, after firing Chili Davis, after losing their entire lineup to the IL yet still staying in first place for 90 days. Hell, Jacob deGrom has been a one-man practitioner of michaelcorleoneism, his every-fifth-day magic replaced by every-two-week medical updates.

If you are out, and you want to stay out, nobody will blame you.

But there’s suddenly an awful lot of baseball season still to be played. We aren’t even at Labor Day yet. By rights, the Mets should already be dead and buried, and as recently as last Saturday, at 8 ½ games back, they sure looked both.

Then the tomato cans showed up. And the tomato cans will keep coming. The Mets are doing what the Phillies and Braves did so well in August, which is to say: the bare minimum. Maybe that isn’t the kind of storyline that inspires a sports movie. But it does ensure meaningful September games.

(By the way … when was a law passed that our two baseball teams aren’t allowed to win games on the same day? The last time that happened was Aug. 22 — 12 days ago, though it feels like 12 weeks ago.)

You are a Mets fan and that means you are not naturally inclined for best-case scenarios. You’ve seen this team (not) hit for 133 games. Jacob deGrom probably isn’t walking in that door. You’re asking for September to be a perfect storm of good fortune. That’s a tall order. Maybe you really are out, for good. And maybe that’s for the best.

But … can you be pulled back in?