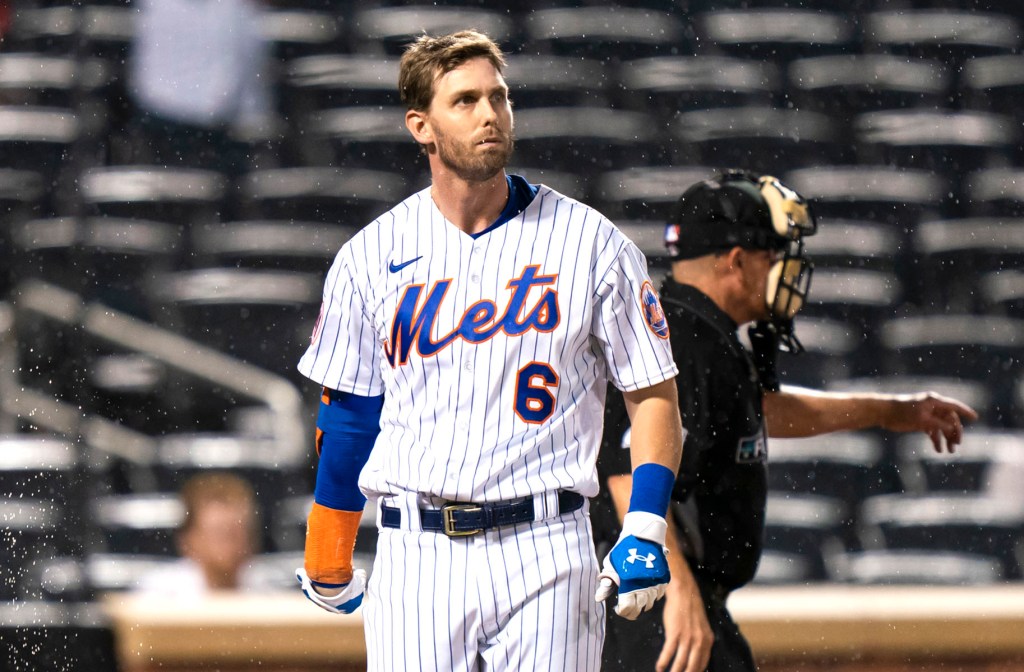 
Instead of taking extra pregame swings, Jeff McNeil might have been better served collecting rabbits’ feet and four-leaf clovers this season.

The Mets’ utilityman looks at his numbers for 2021 and sees mostly disappointment: a .250/.318/.357 slash line with six homers in 393 at-bats. Upon deeper review there’s also been a drop-off in his BABIP (batting average balls in play), suggesting unluckier outcomes than in previous years.

After posting a .337 BABIP in 2019 and .335 mark last year, that number stands at .279 heading into Friday’s game against the Phillies at Citi Field. McNeil, according to Statcast, has an expected slugging percentage of .414 — well above his .357.

“It takes a pretty unique personality to be able to weather that much bad luck, I don’t know how many humans could do it,” hitting coach Hugh Quattlebaum told The Post. “All the expected numbers are saying he was a victim of an extraordinary amount of bad luck.”

McNeil started the season slowly and then strained his left hamstring in mid-May, costing him over a month on the injured list. After a strong return — he posted a .912 OPS in July — McNeil’s production has dropped significantly in August and September. He owned a .534 OPS in August and that number is a still-disappointing .625 for August. He enjoyed one of his better performances of the second half on Wednesday, when he went 3-for-4 against the Cardinals in an 11-4 loss.

“I’m kind of disappointed with my play this year, it’s not where I want to be, where I should expect to be,” McNeil said. “I’ve definitely had some stretches where I have hit the ball well and hit the ball hard, I just haven’t gotten the results. It’s been tough. I go back and look at other years and the numbers are very similar.

“The batting average for balls in play is way down. I don’t know if that’s getting unlucky or whatever it is, but you look at my numbers analytically and they all look different, so it’s a little frustrating for me. I want to do better. I expect a lot out of myself, so hopefully I can finish strong here and get some results.”

McNeil’s anemic numbers would be easier to shroud if the Mets were scoring consistently, but subpar seasons from Francisco Lindor, Dominic Smith and Michael Conforto, among others, have left no place to hide.

“Jeff had a few 0-for-4s that could have been 2-for-4s, it’s amazing what it does,” Quattlebaum said. “Then it makes you start thinking and then you have a legitimate 0-for-4 … now you are 1-for-20 and you start thinking, ‘What am I doing wrong with my swing?’

“And then you start tinkering with stuff and then you go in the box with other stuff on your mind, like ‘I have to get my hands to this spot, I am getting underneath balls, I am hitting too many ground balls and they are not getting through,’ and then it launches into a cycle for two weeks of trying to fix stuff, which isn’t what Jeff was doing in 2019 when Jeff never tried to fix anything because everything was clicking.”

With 15 games remaining the Mets trail the Braves by 5 ½ games in the NL East. The goal remains to reach Atlanta for the final series of the season with a mathematical chance.

“Things haven’t clicked like we want them to,” McNeil said. “We were in first place there for a while, but things have slipped a little bit and we’re fighting for our lives now.”

Daniel Jones stepped up, but the Giants didn’t