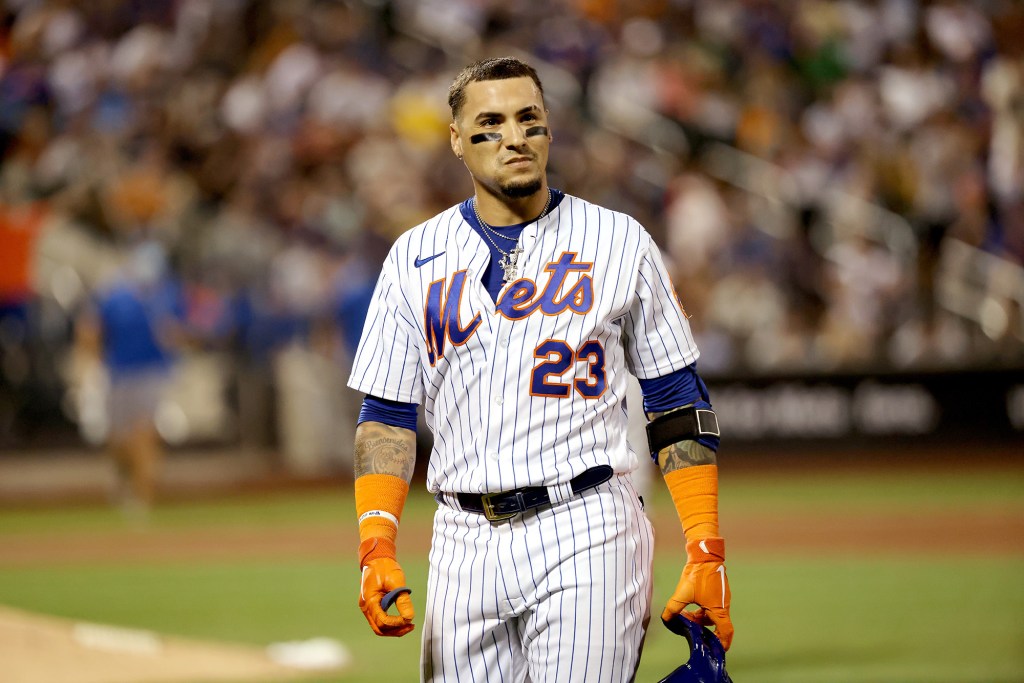 Depending on how you look at things, the small pictures often block the larger ones. Thus, Javy Baez thinks it’s all about him, only about him.

He’s wrong, way off. The booing he has heard, and earned, is only partially about him. But it fully reflects the recent history of a club that promises milk and honey by procuring high-priced saviors — Yoenis Cespedes, Robinson Cano and rental Baez — who were often plainly observed to not give a damn.

Recent history also includes the unforced departures of players who next serve other clubs’ successes. Those include Justin Turner, Zach Wheeler and Steven Matz. Some would start with Nolan Ryan.

Even the Mets’ expensive acquisitions for this new-era, can’t-miss season — Francisco Lindor and catcher James McCann, players who try hard — have had miserable seasons at the plate, when not on the IL.

So to watch Baez strike out five times in one game — all by swinging at bad pitches thrown by itinerant Marlins pitchers, and appearing uninterested in laying off pitches well out of the strike zone — can’t be easy for paying customers to suffer in sympathetic silence.

Further, these fans are now regularly treated by Rob Manfred to 6 ¹/₂- or 7-inning two-admission doubleheaders.

Having gone 0-for-4 with three whiffs the game before, Baez, in his first and third at-bat of Sunday’s game, had struck out on pitches low and far outside, hardly new for a talented fellow who demonstrates little-to-no batting discipline.

So though it behooved starter Eric Fedde not to throw anything near the plate during Baez’s second at-bat, he threw one over the plate. Baez had no recourse but to hit it over the fence, his thumbs-down demonstration followed.

Tuesday, when Baez slid home run with the game-ending run in a wild, five-run ninth — yes, with so many human moving parts in frantic motion at once its was still reported as “a walk-off” — the Marlins needlessly provided the opportunity.

Despite two relievers having pitched well, Don Mattingly, another adherent to the illogical “The Game Has Changed Handbook,” removed both in search of at least one who would lose a four-run lead and the game in the ninth. Where none were needed, he found three.

So Baez, benched by two previous Cubs managers for failure to run to first base — he conspicuously failed to play hard in playoff games — doesn’t like being booed for being the latest Met who plays as if he has something better to do with his time. Imagine that.

Reader Arnold Mazur has the solution: “I suggest Mets fans give Baez a standing ovation before every at-bat and after every ball he handles, regardless of outcome. Overwhelm him with contemptuous applause.”

Had Rich Migliore been an accomplished quarterback, point guard or shortstop, he’d be among the most enjoyed and valued TV analysts in his sport. He was an accomplished jockey, thus the Brooklyn-bred is relegated to being seen and heard on Fox/NYRA thoroughbred racing telecasts.

Saturday, Migliore, so comfortable and candid on the air, was left almost speechless: “I have never seen anything … This is something you might see with mustangs running in an open field, not with two horses with riders on them, but …”

In the eighth from Saratoga, Firenze Fire, on the outside, and Yaupon were neck-and-neck for the lead in the stretch when Firenze Fire suddenly began to bite Yaupon on the mouth. Remarkably, neither horse broke stride as Firenze Fire continued to chomp away — the horse racing term is a bit strong, “savaging.”

Justice prevailed as the victim won by a head. Just after the crossing the finish line the jockeys, Ricardo Santana, Jr. on the winner and Jose Ortiz, exchanged understanding hands to indicate that Firenze Fire would be sent to his room when they got home.

Migliore, working between Greg Wolf and ex-MLB catcher Paul Lo Duca, remained stuck: “I have never — and I’ve been around this game for over 40 years — seen a horse this persistent in going after another horse. I’ve never seen anything like this.”

ESPN remains the place for sports to go to be destroyed.

Sunday it televised a high school football slaughter, 58-0, between an unaccredited Ohio online mystery “school” with highly dubious football credentials, Bishop Sycamore, and national power factory warehouse, Florida’s IMG Academy, founded by the large sports rep firm that houses and trains standout high school-age athletes from all over the country and serves as a shopping mall for NCAA body snatchers.

Bishop Sycamore — abbreviated, B.S. — might be an imaginary school as it is now under investigation on order of Ohio’s governor. It had lost to a school in Pennsylvania two nights before, also escaping ESPN’s scheduling attention, inspection and concern.

ESPN’s sports values are nauseating. Over the weekend, its Little League World Series coverage continued to promote any and all acts of self-aggrandizement, even among children playing a team sport.

The first replay in Sunday’s Ohio-Michigan final was of a kid flexing his muscles as he stood on first after hitting a single. As per ESPN’s annual LLWS standard, it was shown with great approval and delight, more sport-diminishing immodesty approved and invited by TV and pandering Rob Manfred.

That got me thinking. Why doesn’t ESPN boss Jimmy Pitaro gather the kids in his life and teach them what ESPN sells to our kids? Have them pose, preen, boast, brag, pound their chests, talk trash, teach them all-about-me dancing.

Record it, show it on ESPN. Put his name, network, title, face and voice to it. Show it as the way ESPN, from the very top, wants kids to play. If it’s good for our kids, it must be good for his. So show us the courage of that conviction.

Saturday, Wisconsin-Illinois, Fox’s first college football telecast of the season. In the first half, the game changed on a Wisconsin interception wiped out by a roughing the quarterback call followed by a taunting call. Instead of having the ball, Nebraska lost it, plus 30 yards to misconduct penalties.

Having been gift-wrapped back the ball plus 30 yards, Illinois soon scored a touchdown to tie the game. Illinois won, 28-20. First game of the season between two multimillion dollar programs, and it in large part was determined by inexcusable behavior.

Still, Fox continued to cut to commercials with slow-mo footage of players showing off, celebrating themselves, now the essence of all sports in TV’s hands.

Some rough surgery ahead for NYC treasure Howie Rose. But plenty of time to return for spring training. Put it in your book.

So what if taxpayer-funded UConn has laid off dozens and requested a $100 million bailout from the state, there’s always dough for football and basketball. Saturday, UConn opened its football season at Fresno State, a 6,030-mile round trip to lose, as seen on CBSSN, 45-0, in a half-empty 41,000-seat stadium.

Tuesday, with two on, two out, the Mets down, 5-3, and thumbs-down Javy Baez about to pinch hit in that insane five-run ninth inning, SNY’s Ron Darling: “Baseball’s got a sense of humor.”