Mets hope to carry momentum of doubleheader sweep into September 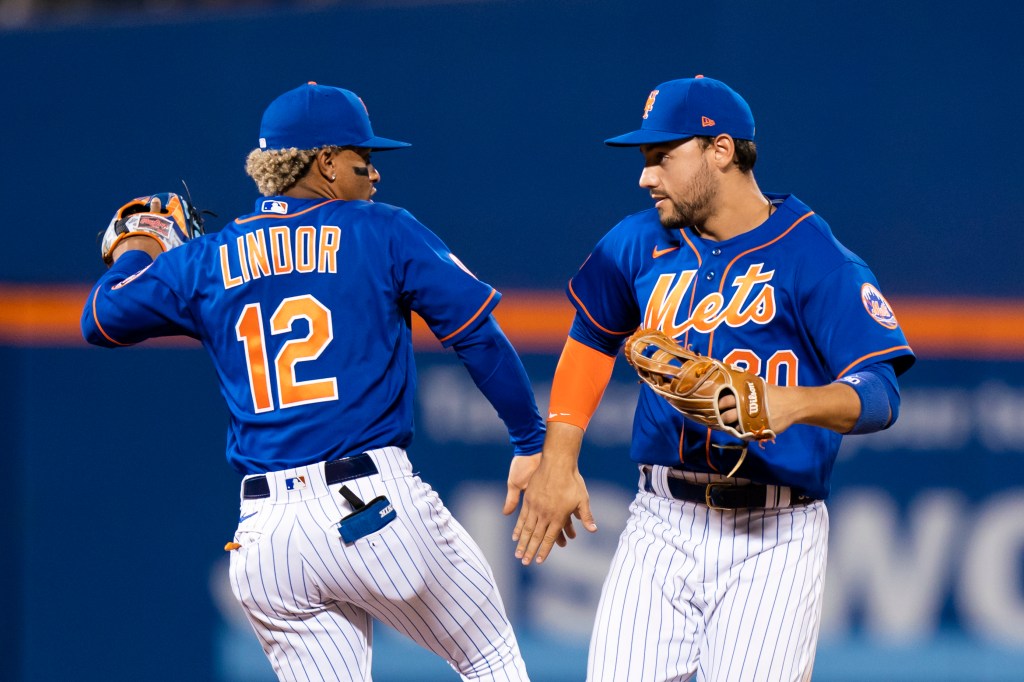 
After a downright brutal August, the Mets found a way to end the month on a high despite the firestorm they found themselves in entering the final day of it.

Now they hope to use it as a springboard for their playoff push over the final month of the season.

The Mets answered the thumbs-down saga the best way they could Tuesday, by sweeping the Marlins in a doubleheader to continue trying to climb out of the hole they dug for themselves in August. They started the final day of the month with a team meeting about the thumbs-down celebration — which president Sandy Alderson had ripped as “totally unacceptable” — followed by apologies from Javier Baez and Francisco Lindor and a lifeless first eight innings of a doubleheader.

But after ending it with Baez and Michael Conforto sparking the turnaround, the Mets had two more wins to their name and the hope it could deliver a jolt to their recently reeling season.

“It was a great day,” Brandon Nimmo, whose two-run homer started the ninth-inning rally in Game 1, said before Wednesday’s game was postponed by rain. “Something to really move forward and try to bounce off of, be able to get this as momentum heading into the rest of the season — what’s left of it.”

Starting Thursday, the Mets have 30 games remaining to salvage their season. After losing their four-game grip on first place in the NL East with a 10-19 August (technically 9-19 because the first half of Tuesday’s doubleheader was the resumption of a game that started on April 11, meaning all the stats are attributed to that day) they entered September trailing the Braves by 5 1/2 games.

While their four wins in four days have come against the NL East’s bottom feeders — and won’t undo the 2-11 stretch they went through against the Dodgers and Giants — the way the Mets saved Tuesday from being another disaster has them believing in what they can accomplish down the stretch.

“We’ve been fighting all year, [with] everything that’s gotten in our way,” manager Luis Rojas said. “I know we went through a lot in August. Just to see the guys going like this until the last out of this game, it tells everybody that these guys don’t quit and they’re not going to quit. They’re going to keep fighting, keep working hard. They’re finding their way into offense now, which is a very, very good sign.”

The offensive struggles were one of the biggest culprits in their August slide, but it has shown signs of life lately, albeit against lesser competition. They have scored 23 runs over their last four games, which they hadn’t done in a four-game stretch since scoring 32 runs from July 18-21 against the Pirates and Reds.

Thanks to mostly strong pitching, the Mets are a staggering 52-13 when they score four or more runs.

Providing the biggest swings for that offense on Tuesday was Conforto, an encouraging sign for the Mets. He hit the walk-off single in Game 1, going the other way, and then pulled a two-run homer in the nightcap that came off his bat at 111 mph — his hardest-hit ball of the season.

“I think he’s really close to being that guy,” Rojas said. “If he shows up in September like he did [Tuesday], that’s going to boost our offense. Some guys at the top now are connecting really well to create situations. They get to Pete [Alonso] and now Michael’s swinging like that and bringing this approach, I think we can score runs. That’s all we’ve been missing.”

The Mets certainly haven’t been missing drama, but perhaps the way they responded to their latest shot of it will provide the spark they needed.

“Winning is the cure,” Conforto said. “That’s what we’re looking to do.”