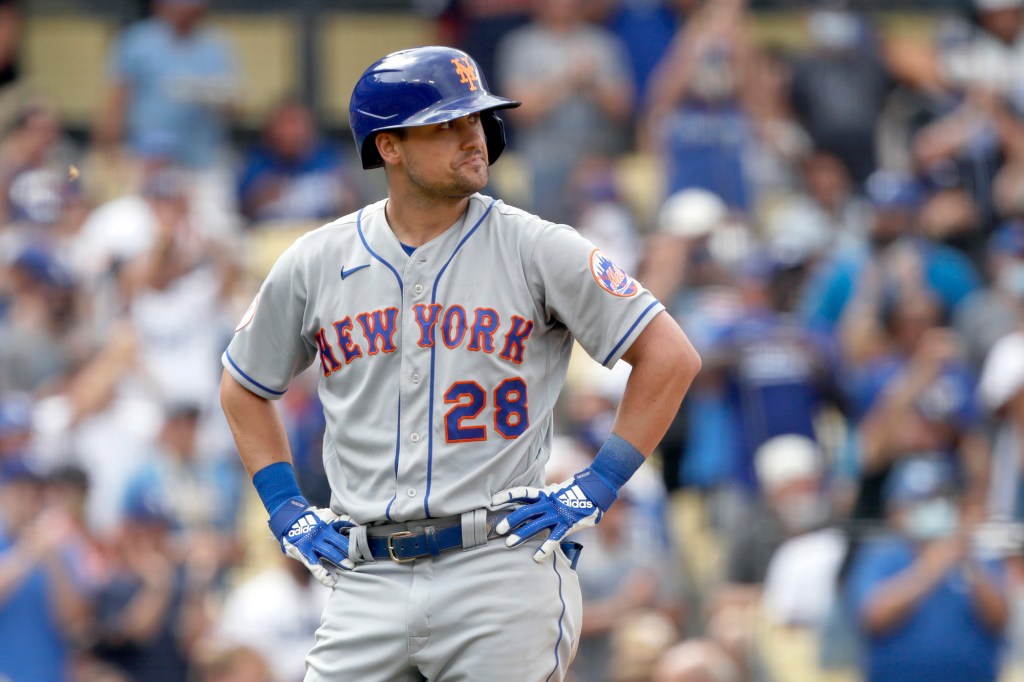 LOS ANGELES — Opportunity knocked, but the Mets dozed on the couch without answering the door.

In their painful attempt to score runs, there is a spin-the-wheel list of reasons for the Mets’ repeated failure. On Saturday, the wheel landed on “awful with runners in scoring position,” sending the Mets to their eighth loss in nine games, 4-3 to the Dodgers at Chavez Ravine.

The Mets went 0-for-9 with runners in scoring position, though they matched the Dodgers in hits (with eight) and managed to hit two homers. The loss was the third in four games since team owner Steve Cohen tweeted in frustration Wednesday, fuming about his “unproductive” hitters.

On this day, there wasn’t a larger missed opportunity than in the fifth inning, when J.D. Davis struck out with the bases loaded against Max Scherzer. But the Mets also had scoring chances in the first, fourth and ninth innings that went unanswered.

“We just can’t finish what we start and it’s happened a lot of times,” manager Luis Rojas said.

In their final attempt, Jeff McNeill and Pete Aonso struck out in succession against Kenley Jansen in the ninth to conclude the game with the potential tying run at second base. The Mets fell three games below .500 and were 6 ½ lengths behind the Braves in the NL East as Saturday night’s action commenced.

Alonso’s third homer of the road trip, a two-run shot in the seventh, got the Mets within 4-3. McNeil drew a two-out walk — the slumping second baseman’s second straight time on base in the game — before Alonso cleared the left-field fence for homer No. 28 this season.

Brandon Nimmo’s two-out homer in the fifth gave the Mets their first run. That was followed, however, by a wasted opportunity against Scherzer: After the Mets loaded the bases, Davis struck out on Scherzer’s 103rd and final pitch of the day, a 96-mph fastball. It was the second straight letdown with the bases loaded for Davis, who struck out in the eighth inning Friday night in a one-run loss.

“It just seems like we’re having a tougher time putting some big hits together, it kind of breaks you,” Nimmo said. “Pete obviously came through today with a huge hit, but it’s seeming like these games are taking a few more than one — we’re needing to come through two or three times in games in a big situation and that really hasn’t happened lately.”

Rich Hill gave the Mets five innings, in which he allowed three earned runs on six hits with two strikeouts. In six appearances since arriving from the Rays at the trade deadline, the left-hander has pitched to a 6.23 ERA. He has not recorded an out beyond the fifth inning since June 29, while still pitching for Tampa Bay.

Hill, facing the team for which he pitched from 2016-19, allowed solo homers in the first to Trea Turner and Albert Pujols to put the Mets in a 2-0 hole. In the fourth, Chris Taylor went deep with two outs for the Dodgers’ third solo homer of the game. Hill, who was removed after 71 pitches, indicated he would have preferred to remain in the game.

“I threw the ball well, but unfortunately gave up the three homers,” Hill said. “But I want to stay in the game, always.”

The Dodgers added a run in the sixth against Miguel Castro, who walked three straight batters in the inning, including Taylor with the bases loaded. Jeurys Familia got three outs in the inning without another run scoring. But the Mets were finished scoring after Alonso’s homer in the seventh.

“It’s really tough because a few weeks ago we were in first place and feeling really good about things,” Nimmo said. “We knew a tough stretch was coming, but we were confident in what we had. This definitely has not been easy.”