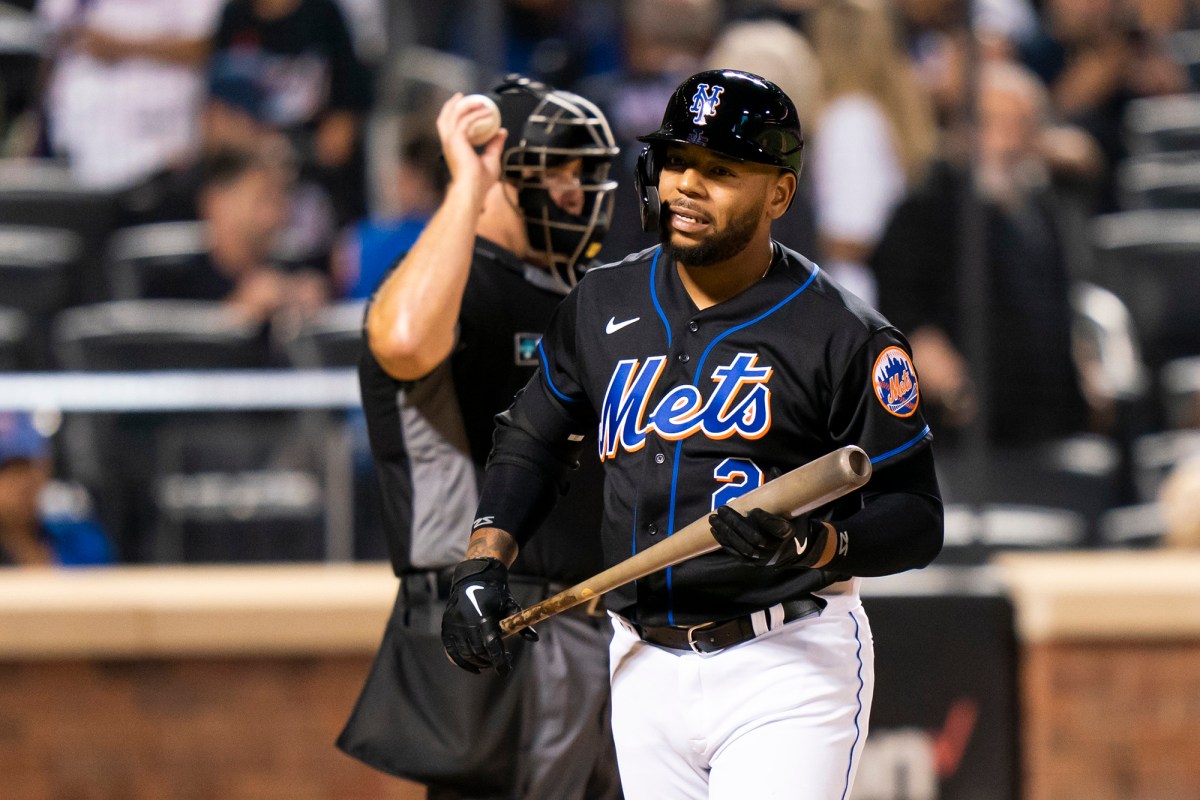 The Mets wanted Friday night to be a blackout at Citi Field, but didn’t mean for it to include their offense.

On a busy trade-deadline day — when the Mets landed Javier Baez from the Cubs, debuted Carlos Carrasco, brought back their black jerseys and then shut down Jacob deGrom with an injury setback — the team’s bats delivered the ultimate buzzkill Friday night in a 6-2 loss to the Reds.

The Mets (54-48) fell to 7-8 since the All-Star break and were left hoping that Baez’s arrival on Saturday can provide a shot in the arm for MLB’s third-worst offense, which had been playing better of late.

“Our bats went silent,” manager Luis Rojas said. “We weren’t taking a lot of ‘A’ swings today. Got jammed a lot, we were in between. We just gotta come in tomorrow and do a better job taking our ‘A’ swings.”

To make matters worse, the Mets now face another injury worry with one of their best hitters, Brandon Nimmo. Rojas said he was planning to pinch hit for Nimmo in the ninth inning (had the game not ended before his spot came up) after the outfielder felt a “pinch” in his left hamstring when making a diving catch earlier in the game.

As for the lackluster offense, the jugular was there for the taking in the first inning and the Mets came up empty. They failed to score on a bases-loaded, no-out situation against Sonny Gray that loomed large the rest of the game. The Mets only mustered seven baserunners the rest of the way after letting the Reds (55-49) off the hook early.

“That was it,” Rojas said. “We were all over Gray and guys had a pretty good idea of his repertoire. … We weren’t able to maintain that sequence. We could have capitalized a little more there in that first inning.”

A slumping Michael Conforto was one of the main culprits, striking out with the first crack at the bases-loaded chance before Jonathan Villar grounded into an inning-ending double play. Conforto was booed throughout the night while going 0-for-4 with three strikeouts, and his batting average fell to .199.

Carrasco turned in a strong outing, despite allowing a home run on the first pitch he threw in a Mets uniform when Jonathan India took him deep to lead off the game. He threw 58 pitches across four innings, giving up the one run on three hits and one walk while striking out four.

The encouraging outing, Carrasco’s first since being acquired by the Mets, then tearing his hamstring in spring training, was even more important after the news that deGrom would be shut down for two weeks and unlikely to return until September.

“I feel really good, besides the first pitch of the game,” Carrasco said. “After that pitch, I settled down a little bit. I was so happy, a little bit nervous too. It was a long time to get back.”

Carrasco left with the score tied 1-1, but Miguel Castro gave the lead back to the Reds in the fifth, when he allowed a two-out double by India and an RBI single by Jesse Winker. Joey Votto then homered for a seventh straight game, off Drew Smith in the sixth, to put the Reds up 3-1.

Gray and the Reds bullpen, meanwhile, retired 15 straight batters into the eighth inning, when the Mets finally threatened. They had runners on first and second with one out, but Mychal Givens escaped by getting Jeff McNeil to pop out and Pete Alonso to ground out to end the inning.

The Reds piled on with three runs in the top of the ninth, including India’s second home run of the night, a two-run shot off Anthony Banda for the 6-1 lead.

The Mets scratched across a run in the bottom of the ninth, but left two more runners on to end the night the way they started it.