Meet Carrie Bradshaw’s new ‘Sex and the City’ hunk: A boxer and model 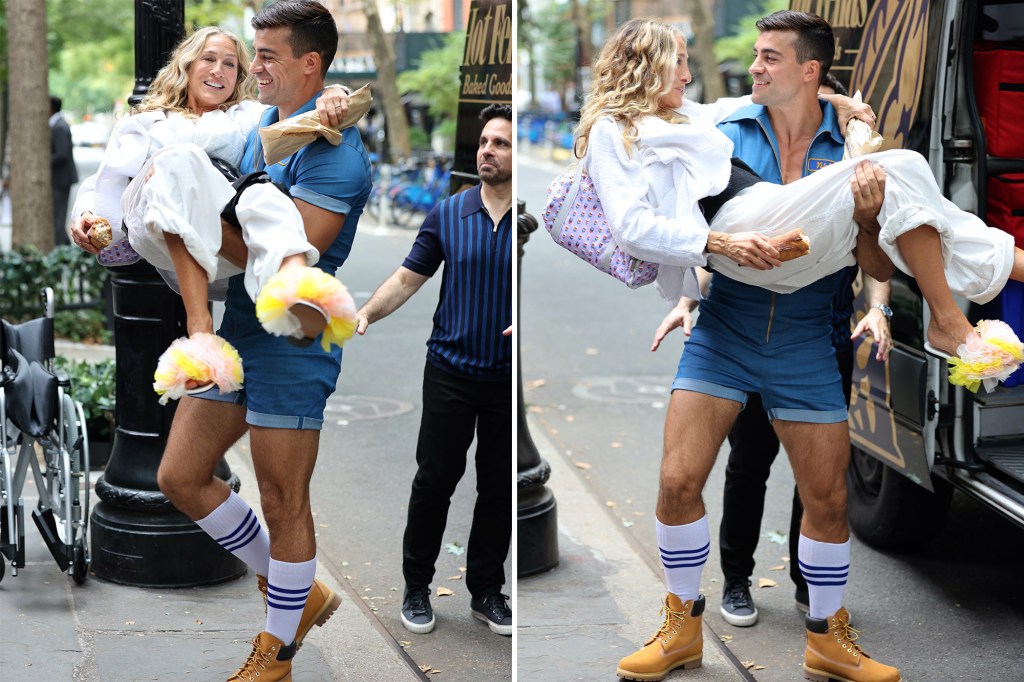 
Talk about a hunk — of bread.

On Friday, a chiseled bakery worker was photographed carrying a baguette-eating Carrie Bradshaw, played by Sarah Jessica Parker, up the stairs on the set of the “Sex and the City” reboot, “And Just Like That.”

The Post can reveal that the mystery beefcake — who is wearing form-fitting, thigh-exposing coveralls emblazoned with “Hot Fellas Baked Goods” on the set — is French actor and model Thomas Canestraro.

The 6-foot-1, blue-eyed 35-year-old is a former kickboxing champion, who has acted alongside Sylvester Stallone and Mel Gibson in “The Expendables 3” and in a few episodes of Tyler Perry’s “The Have and the Have Nots.”

He grew up in Villeneuve-le-Roi, a small town outside of Paris and moved to New York about ten years ago to pursue personal training, where he was discovered by a client.

“One of my clients literally offered me a modeling gig for his apparel brand,” Canestraro, 35, told The Post. “From there I was scouted by photographer Tim Palen who was then at Lionsgate.”

He and Palen struck up a friendship and he helped Canestraro land the role as Mel Gibson’s henchman in the action drama.

“It was a dream. I came out to New York and grinding and two years later, I got my first movie,” said Canestraro who took acting and comedy classes to hone his skill set.

If his muscular frame and chiseled jaw look familiar, that’s because he’s cozied up with another Tinseltown babe before. In 2018, he posed with Blake Lively, who was then promoting her film, “As Simple Favor,” and her husband Ryan Reynold’s Aviation American Gin. In one racy snap, shot by Palen, he was nude, on his back with his legs spread in the air and holding a martini, while Lively posed between his sculpted gams.

When Canestraro — whose dream is to act in a Scorcese movie — isn’t mugging for the camera, he’s slugging someone in the ring. An avid boxer, personal trainer and kickboxer, he holds five championships from the World Association of Kickboxing Associations and 11 Light Kickboxing titles, and multiple national titles in France.

But his last competitive fight was in 2011 when he gave it up to pursue a life in the US, where he arrived knowing no English.

He holds both a Bachelor’s of Science degree, a Masters in youth, education and sports and, before the pandemic, was taking stand-up comedy and improv classes. He recently moved to Jersey City and is dating someone but is coy on the details. Another subject where he is mum, is his close-up with Carrie Bradshaw, citing an NDA.

But it’s safe to say, this delivers the goods.