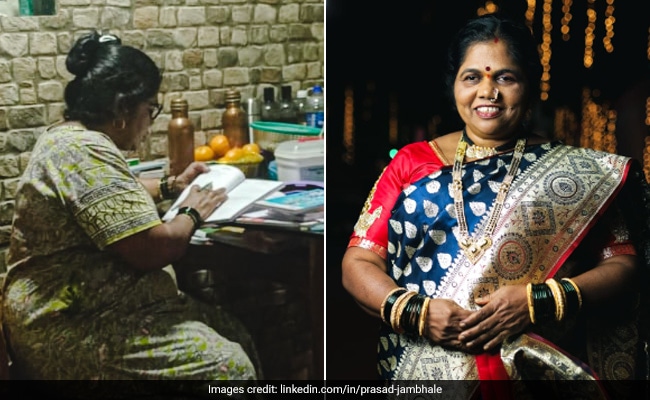 Mr Jambhale’s mother not only cleared the SSC examination, but also scored an admirable 79.6 per cent.

There are many incidents in our country that leave us stunned but also proud. A woman who passed her Class 10 exams 37 years after giving up academics has become an inspiration to millions of people.

A post has been shared on LinkedIn five days ago by her son Prasad Jambhale where he wrote how his mother had to drop out of school to help her family financially after her father died when she was just 16.

Last year, Mr Jambhale’s mother was at a government school for some work when a teacher inquired about her education. She told her that there is a new government programme where those who have not finished their Secondary School Certificate or SSC can reappear now. The government provides free study materials, offline instruction, and internet training, he said in the post.

According to his LinkedIn profile, Mr Jambhale is a Senior Software Engineer at Mastercard.

His mother decided to go back to school in December 2021. Since he lives in Ireland, he had no idea that his mother attended night lessons. His mother managed to hide it from her husband and another son, who live in the same house.

“Whenever I was in Ireland and used to call during Indian nighttime, I used to ask where’s mom? And I was told that she has gone for a walk, I thought that’s odd that she got interested into walks. Little did I know that she was attending night school. She even managed to keep this secret hidden for a month from my father and brother, who stay under the same roof,” he further said.

Mr Jambhale stated, “Her days started with learning all lesson from the SSC curriculum,” and I was shocked to see how good she is at Algebra and English.

According to Mr Jambhale, even after all these years, she was still able to learn new things, and not only that, but she was also a brilliant student. She managed to multitask to the full extent required, despite the fact that her exams were in March and her son got married in February.

Mr Jambhale’s mother not only cleared the SSC examination, but also scored an admirable 79.6 per cent.

“Sometimes I feel I am so fortunate that I had no worries about anything and was able to get to the position, just because of the privilege I have. Who knows what my mother could have achieved more? If she had the same privilege as me. Have always been very proud of my mother and now this would always imprint a lesson in my mind, never stop learning, even if it has to take an age of 53 to pass the SSC,” he added.