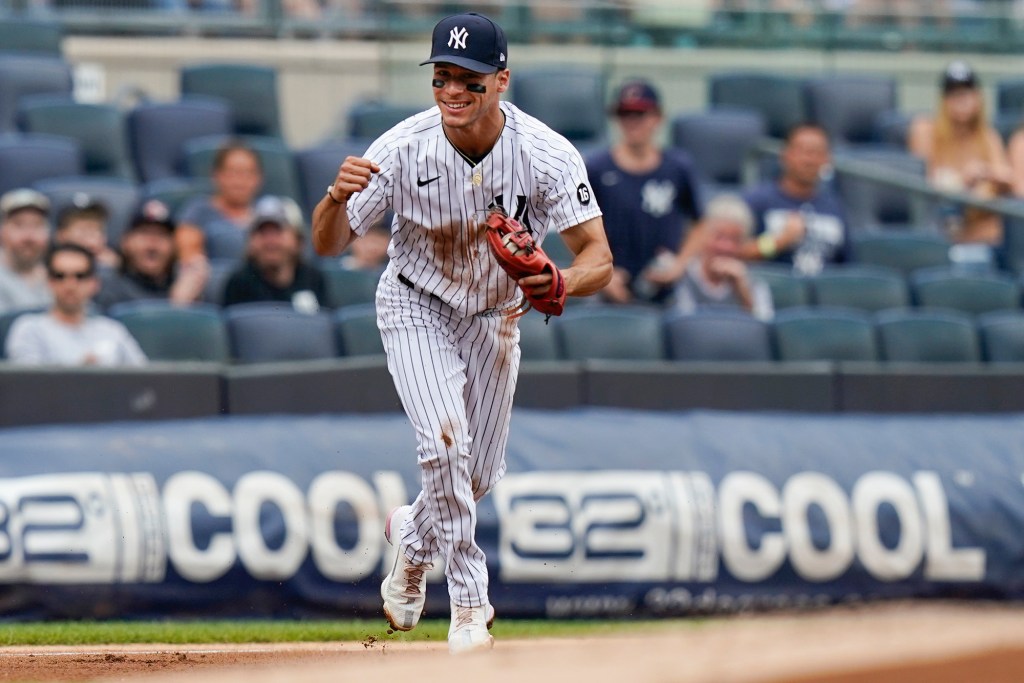 “This just in: A large pothole formed on a Midtown street today. Police are looking into it.”

This has been a week that local media allowed us several opportunities to reflect on whether we or they have gone nuts.

As the rain from Tropical Storm Henri, mon ami, filled the streets, TV news producers figured we didn’t have windows to see for ourselves or couldn’t simply take anyone’s word for it.

So, predictably, it seemed that every local station dispatched a crew from its “Storm Squadron,” “Weather Panic Patrol” or “Tropical Depression Tempest Team” to report from a flood.

One can hear the news director: “Go find a flood then stand in it, or at least next to it!”

Mere footage of the flooding, with no reporter to point to it or stand in it, wouldn’t cut it. Thus it had to be, “See that? That’s flood water, lots of it. Wait, I’ll go stand in it. … Real flood water, see?”

Now back to sports.

The Yankees’ latest shortstop, Bronx-bred Anthony Velasquez, almost immediately stole the media’s hearts and heads because he plays two-way, winning baseball. He runs hard, plays hard and actually swings to hit the ball somewhere other than pulled over the nearest fence.

He brings to mind Jeremy Lin, whose everybody-in quarterbacking for almost a month in 2012 made the moribund Knicks exciting and successful, until Carmelo Anthony and minimalist basketball returned to doom the team and Lin’s style and presence.

Yet most local NBA media were non-resistant to a return to Anthony’s slow-it-down, long-range redundancies.

For now, Velasquez has won what he has earned: recognition and admiration for playing good baseball, maximizing his presence and talents, and, at least minimally, as they now say, “changing the culture.”

So why have the same local media — print, TV, radio — indulged, excused or ignored the far better-known and better-paid players who radiate a style that shows they don’t give a damn?

Why have those who don’t run to first, pose near home plate because “they thought” they hit a home run, and consistently display no regard for here-and-now game circumstances, escaped criticism, the kind that might bring change?

Why do media continue to advocate “playing with swagger” when swagger has never won a game, but has helped lose many?

Velasquez has won approbation by playing winning baseball while those paid tens of millions feel entitled to play me-first, team-last, losing baseball. Why are those who conspicuously and regularly demonstrate minimal effort suffered with, at worst, a “the game has changed” shrug?

Makes you want to go stand in a flood.

When Mushnick rolled with Stones

In the late 1970s, Mick Jagger and Charlie Watts, the Rolling Stones’ drummer who died this week, were semi-regulars at Cosmos games and in the locker room at Giants Stadium. The Cosmos were owned by Warner Communications and run by its meddlesome popular music executives.

Watts didn’t say much, but Jagger, an ardent soccer fan who played in England’s equivalent of high school, said plenty. And when in New York, he apparently read The Post’s Cosmos coverage, thus he sought me out.

That was a problem.

1) I was on deadline and politely had to tell Mick Jagger, of all people, that I was too busy to speak with him.

2) His thick port-town accent made him difficult to understand. All I heard was a variety of “Iff-a-but-a bout-a-bit-a-fub, a-biffil-pie.”

I hope I haven’t misquoted him.

Anyway, the photo, circa 1977, of Watts, Jagger and me within today’s column shows the two Stones looking less than cheerful. That’s because I’d just told them I was leaving to start my own band.

So much for Sha’Carri sympathy

I guess if you don’t feel oppressed, you’re just not trying.

When champion sprinter Sha’Carri Richardson was tossed from the U.S. Olympic team by the IOC for failing a drug test — marijuana — her ban, even if self-inflicted, as she admitted and apologized for, was decried as harsh. Richardson became the recipient of widespread sympathy.

Saturday in the state of West Nike (aka, Oregon), in her first race since her banishment, she finished ninth — dead last — but then, to NBC, expressed her angry defiance toward, well, you tell me.

Staying classy, she said, “Talk all the s–t you want, ’cause I’m here to stay.”

Can’t recall anything but sorrow and sympathy for her, but some truths don’t make as much news or noise.

This may have been Albert’s first approved appearance on MSG since 2004, when Jim Dolan dumped him for negative cracks about another rotten Knicks team.

Might Dolan be softening? It’s hard to imagine that Albert would again appear on MSG without Dolan’s OK.

In 2016, MSG Network eliminated Jeremy Lin and “Linsanity” from a show about the Knicks’ most exciting players in the first 15 years of this century — a foolish, eye-catching decision based on protecting Dolan from Knicks fans’ memories of another bad decision.

But MSG gave that Andariese memorial the Joseph Stalin treatment, as only a quick glimpse, perhaps by mistake, of Albert appeared.

I have a feeling that this season Dolan will further realize that the best of Garden memories are not his to place under lock and key, that he’s both the Garden’s plutocrat and its caretaker. I even sense a salute to Albert, Dolan and he shaking hands.

That would give Dolan a chance to do something he has never done but needs to do: win the night.

This week’s video of new Mets strikeout artist — no MLB team should be caught short of those — Javy Baez swinging at a pitch that was still about three yards from reaching the plate, brought to mind the 1946 Bugs Bunny classic.

Pitching and playing the other eight positions for the Tea Totallers vs. the unshaven, cigar-chomping Gas-House Gorillas, Bugs struck out the side in order, all on three swings each at just one pitch, after saying, “I think I’ll perplex him with my slow ball.”

But that was before analytics.

Diminished standards: Saturday, Mets’ WCBS radio voice Wayne Randazzo as the Dodgers’ Chris Taylor batted: “He’s had a good year, despite 131 strikeouts.” As of Thursday, Taylor had struck out in 31 percent of his at-bats. Heck, we’d pay to see that!

Late night talk show host would be a great full-time job for ESPN/ABC blowhard and rotten guesswork oracle Stephen A. Smith, who this week subbed for ABC’s Jimmy Kimmel. Depending on his guests, Smith has many phony, race-based dialects — including suburban white — from which to choose.

Does it strike you that local sports media remain far more interested in Odell Beckham Jr. than do local football fans?

Reader Ralph Caola: “Those all-blue (“Los Dodgers”) uniforms the Dodgers wore against the Mets did not flatter the physique of Albert Pujols.” Worse, you’re not supposed to wear all-blue until after Labor Day.