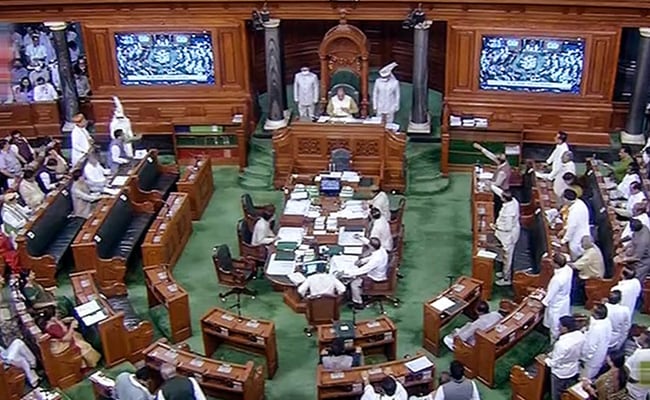 Proceedings in Lok Sabha were disrupted for the third day due to continued vociferous protests by opposition members who were demanding an urgent discussion over price rise and the imposition of the Goods and Services Tax (GST) on some daily-use items.

When the House met on Wednesday morning, Speaker Om Birla told the protesting members that he would give them an opportunity to raise the issues during the Zero Hour.

“This House is for discussions and not for shouting slogans. This kind of conduct is not appropriate for the decorum of the House and there is a process to be followed by the members,” the Speaker said.

Parliamentary Affairs Minister Pralhad Joshi said it was not right for the members to enter the well of the House and protest despite the Speaker assuring them that they will be allowed to raise the issues later.

“Are the protesting members interested in discussions or not?” Mr Joshi asked.

As the din continued, Mr Birla adjourned the proceedings till 2 pm but the opposition resumed its protests when the House met again.

The House was then adjourned till 4 pm.

P V Midhun Reddy, who was in the chair, took up matters of urgent public importance under Rule 377 when the proceedings resumed. After a few members spoke amid the din, the Chair adjourned the House for the day.

Several Opposition members, some of them holding placards and shouting slogans, trooped into the well of the House. Some were also seen carrying placards demanding the withdrawal of the GST imposed on items such as buttermilk and curd.