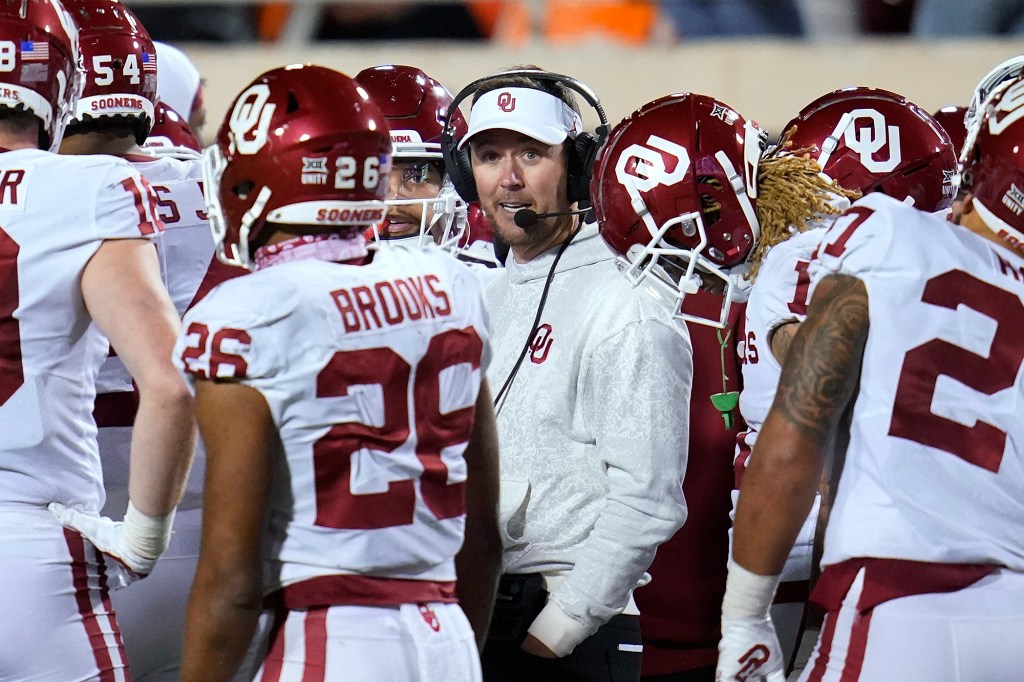 
Lincoln Riley gave a vehement denial to reports he would coach LSU on Saturday night. But he never said he was staying at Oklahoma.

USC announced Sunday night that it has hired Riley as its next football coach, culminating a coaching search that got underway all the way back in September. He is scheduled to be officially introduced as coach in a press conference on Monday.

“I am truly excited to come to USC and join the Trojan Family as its new head football coach,” Riley said in statement. “USC has an unparalleled football tradition with tremendous resources and facilities, and the administration has made a deep commitment to winning.  I look forward to honoring that successful tradition and building on it.  The pieces are in place for us to build the program back to where it should be and the fans expect it to be.

“I want to thank the administration, coaches and players at Oklahoma for five incredible years as their head coach.  We accomplished some great things there and I will always cherish my time as a Sooner.”

Riley, who replaced Bob Stoops at Oklahoma, has compiled a 55-10 record and three College Football Playoff appearances with the Sooners since being hired ahead of the 2017 season. Though Oklahoma has consistently churned out one of the best offenses in the nation with quarterbacks like Baker Mayfield, Kyler Murray and Jalen Hurts, their defense has shown a consistent inability to compete with the nation’s top teams.

Still, that hasn’t been enough to stop Oklahoma from winning four Big 12 titles under Riley — all but in 2021, when they lost a chance to play in the conference title game with a rivalry loss to Oklahoma State on Saturday.

At USC, which doesn’t have a bowl win since 2016 and is currently 4-7 after starting the year 15th in the AP Poll, Riley has a chance to rejuvenate a sleeping giant.

“Lincoln is the rarest combination of extraordinary person and elite football coach,” USC athletic director Mike Bohn said in a statement. “His successes and offensive accolades as a head coach the past five years are astonishing. Lincoln will recruit relentlessly, develop his players on and off the field, and implement a strong culture in which the program will operate with the highest level of integrity and professionalism.

“Lincoln is universally considered one of the brightest and most talented football coaches in the nation, and the fact that he chose USC is a testament to the strength of our brand, the power of the Trojan Family, and the leadership of our university.”

The Trojans have been on the outside looking into the College Football Playoff discourse since the format’s inception in 2015, and was last in the national championship discussion more than a decade ago under Pete Carroll.

USC has since been through disappointing tenures from Lane Kiffin, Steve Sarkisian and Clay Helton. Helton won the 2016 Rose Bowl but ultimately flamed out, getting fired early this season.

Riley will need to navigate an athletic department that has been rocked by recent scandals, a California recruiting landscape that USC has traditionally dominated and the expectations of boosters that have been disappointed in recent years. And, one imagines, he’ll also hope he won’t need to cross paths with the Sooners.

“No concerns about our administration, our AD, our president,” Riley told reporters after Oklahoma’s loss on Saturday. “We’ve been through a lot together. This isn’t our first rodeo together. So we always have conversations about the future and certainly with all that’s changing right now on the college landscape, all that’s getting ready to change.

“For us at some point here, we transition into a new conference [the SEC]. Those are always conversations that we’re going to have, and we will be having those yearly, no matter what. All of us are trying to make this place better, make this program better, and so you don’t do that without working together and conversing with each other. So of course we’re gonna continue to do that. We work well together, and we’re going to keep working well together.”

Instead, Riley will be working at another blue blood — and leaving Oklahoma in his wake.