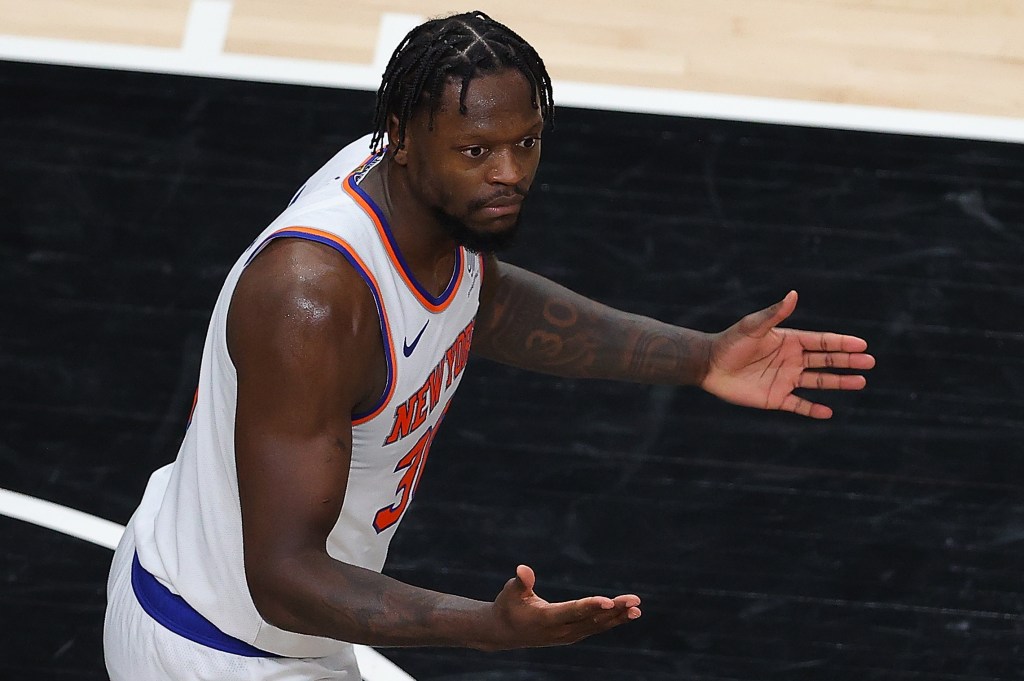 The Westgate Superbook came out with its over-under for wins Tuesday and placed the Knicks’ total at 42.5. Even a winning bet that would leave the Knicks at 43-39 is short of last season’s winning percentage.

The Knicks’ record this past season gained them a fourth-place finish because they won the tiebreaker with Atlanta. The Knicks gained home-court advantage in the first round but were walloped in five games by the Hawks, who went to the Eastern Conference Finals.

Last year, Las Vegas didn’t see the Knicks’ renaissance coming, placing them with 22.5 victories — an “Over’’ bet captured after 55 games.

Teams that finished behind the Knicks have upgraded while the Knicks’ improvements are still debatable because of durability issues. With a league-high cap space, the Knicks stressed continuity and flexibility.

Westgate has projected Miami at 47.5 wins, the Celtics at 46.5 and the Pacers also passing the Knicks with an over-under of 43.5. The Bulls pulled even at 42.5. Overall, the Knicks’ total is tied with the Bulls’ for eighth in the East. The top teams in the East are projected to be the Nets and Bucks, both at 54.5.

The Knicks will field a point-guard tandem of Kemba Walker and Derrick Rose, both of whom have had major knee issues in the past. Walker is a major upgrade over Elfrid Payton offensively but not defensively.

The Knicks believe they have improved at the starting shooting guard — with new $78 million signee, Evan Fournier. He will replace Reggie Bullock, who had a career year as a “3-and-D” specialist and was called the team’s “unsung hero’’ by head coach Tom Thibodeau.

With the Hawks figuring to be stronger than the Knicks after going 27-11 under interim coach Nate McMillan, the consensus is the Knicks would be fortunate if they held onto a fifth place.

Miami, which made the NBA Finals in 2020, has improved a lot with the signing of Kyle Lowry at point guard — a player the Knicks had their sights on. The Heat also added defensive specialist P.J. Tucker.

In addition, the Bulls look vastly enhanced, with the free-agent additions of Lonzo Ball and DeMar DeRozan and a full season from center Nikola Vucevic.

Indiana, after an injury-plagued down year, has everyone back and drafted a potentially key contributor in Chris Duarte, a 24-year-old swingman whom the Knicks cherished and shined at summer league.

The Celtics, though their only notable additions were second-tier Dennis Schroder and Al Horford, also surpassed the Knicks’ predicted win total.

The good news for the Knicks is their three draft picks on the roster, showed promise in Las Vegas — shooting guard Quentin Grimes, point guard Miles McBride and center Jericho Sims. The question is whether Thibodeau can rediscover his Coach of The Year magic from last season’s wild ride in a mostly empty Garden.

When the arena was filled to the brim for the playoffs, the Knicks were 1-2 and Julius Randle reverted to pre-All-Star form.

The Knicks will open a four-game preseason slate Oct. 5 by hosting the Pacers, the team announced. The Knicks will also face the Pistons (Oct. 13) and Wizards (Oct. 15) at the Garden, and will play at Washington (Oct. 9).