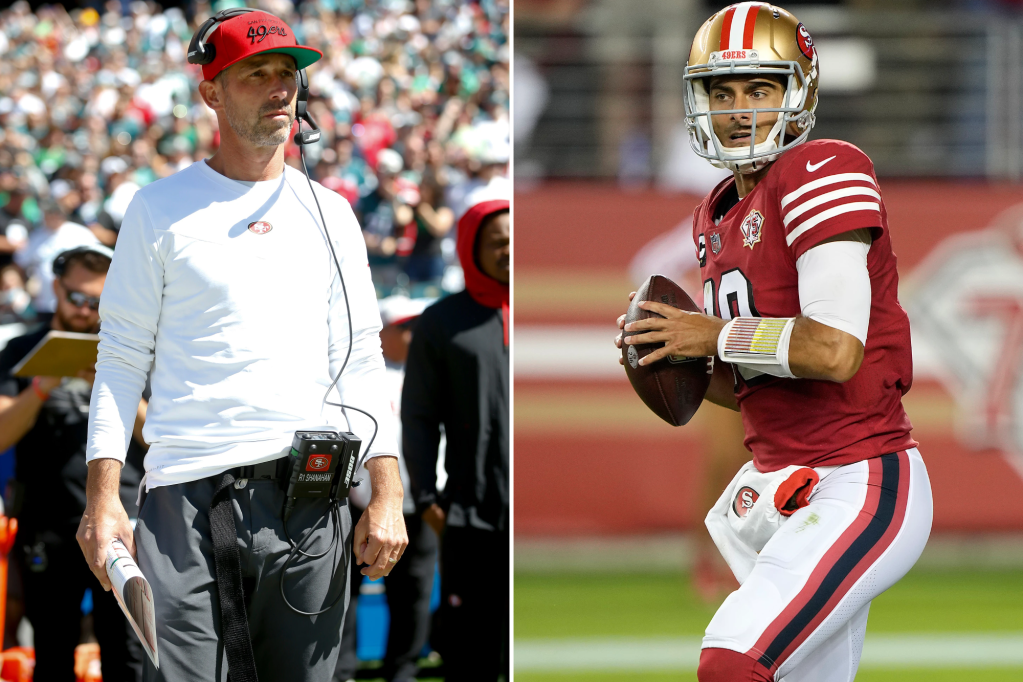 
So you’re saying there’s a chance.

Kyle Shanahan and 49ers brass made it clear in April that they’re all-in on rookie quarterback Trey Lance, despite having veteran Jimmy Garoppolo on the roster. After months of trade rumors, Garoppolo remains the clear starting quarterback in San Francisco and that may not change anytime soon.

“There’s a chance for anything, but I think we’ve made it pretty clear that Trey is our guy of the future, whenever that will happen,” Shanahan said, according to Pro Football Talk. “But it’s also nothing against Jimmy that we took him, but we do think Trey is our guy of the future. Like I’ve said, I think it’ll be really hard, if Jimmy is on it, for him to beat him out right away. So it’s kind of going like that right now, and we’re not thinking much past that.”

The 49ers traded up in this year’s NFL Draft to grab Lance at No. 3 overall, sending a first-and-third-round 2022 pick, and a 2023 first-round selection to the Dolphins back in March.

Lance, a 6-foot-4 rookie from North Dakota State, threw a touchdown on his first career pass in the 49ers’ win over the Lions in Week 1. Lance saw significant time in losses to the Seahawks and Cardinals in early October when Garoppolo suffered a calf injury. Garoppolo, though, now has the 49ers at 5-5 and on a two-game winning streak.

The uber-athletic Lance can open up Shanahan’s offense in ways that the veteran cannot. But Lance only made 17 college football starts and was not facing top-level competition at North Dakota State.

It all adds up for a murky future for Garoppolo, who the 49ers can cut this offseason without any salary cap damage.

“Honestly with the possibilities, I try not to close any doors too early,” the 30-year-old quarterback said, according to 49ers WebZone. “It’s one of those situations you’ve got to let it play out, I think. We’ve got a lot going on with the season and everything right now. If you start thinking about those other things, you just get distracted, I think. But when we cross that bridge, we’ll assess everything then.”

Garoppolo was traded to the 49ers from the Patriots in October 2017. Less than a year later, in February 2018, he and the team agreed to a five-year contract worth up to $137.5 million. And while Garoppolo and the 49ers have enjoyed success with him under center — notably a Super Bowl berth at the end of the 2019 season — he has been sidelined on multiple occasions due to injuries.