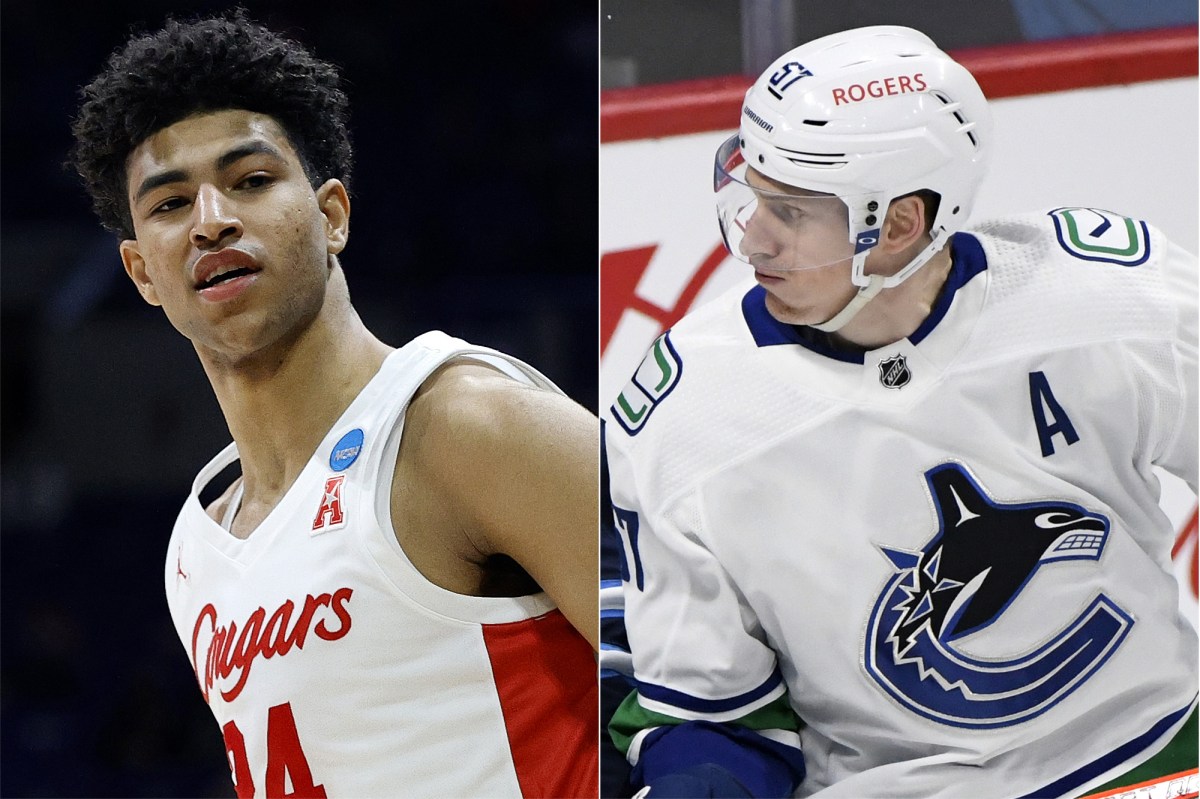 
They are an odd couple: Knicks rookie shooting guard Quentin Grimes and his brother, Tyler Myers, a 13-year NHL veteran defenseman who plays for the Canucks.

Myers was born in Houston, but was raised in Calgary with his oil-man father and led the hockey life. He became one of the slickest skaters patrolling the blueline, known for his finesse, even at 6-foot-8. He won the NHL’s Rookie of the Year award in 2010.

Grimes, who is shorter than Myers at 6-4 and 10 years younger, grew up with his mother, Tonja Stelly, in Houston, doesn’t know how to skate and was among the nation’s top high-school recruits when he chose to play at Kansas. His father is former college point guard Marshall Grimes.

The younger Grimes earned notoriety for his toughness on defense after transferring to the University of Houston in 2019 and leading the Cougars, this past season, to their first Final Four appearance since 1984.

Grimes and Myers aren’t much alike in their backgrounds, but that allowed them to make history — the first NBA-NHL brother tandem.

“It’s really cool,’’ Myers told The Post in a phone interview. “It’s pretty special to not have been done before. It’s a dream for him and I to be the first ones. It’s a pretty cool feeling, a chance to go down in history. It’s pretty amazing.”

If Grimes can have the kind of rookie year that Myers once experienced in the NHL, Knicks president Leon Rose will be doing cartwheels on ice.

“There will be similarities off the bat,’’ said Myers, whose father played college hockey. “Even though we didn’t live together for all that long, being 10 years apart in age, I still followed him from afar and tried to help him along any way I could. Quentin is a guy who showed especially in the last three years of college he can handle adversity, bury his head and keep working. The other night what happened to him was testament how hard he worked.’’

Grimes, who will make his Knicks debut Sunday in the Las Vegas summer league against the Raptors, dealt with a trying freshman year at Kansas, which led to his transfer.

Myers is confident that, after the way  his 21-year-old brother responded to  his Kansas debacle and reaching the Final Four with his hometown university, Grimes will tackle Manhattan.

“Quentin went through adversity in his first year in Kansas, which is a massive college market,‘’ Myers said. “For him to do what he did and come out of that first year and get himself out of it and where he is today, it gave him the experience to handle the pressure at the pro level.

“Obviously New York is a massive basketball market. It’s going to continue to take a lot of hard work to keep playing at the level he’s playing at. He’s gone through similar adversity at a college level That will only help him playing in the NBA.’’

Myers’ wife is expecting a baby girl any day, so he couldn’t make it to Houston to watch the July 29 draft with family. Even though they’ve lived apart, nobody was prouder than Grimes’ big brother, who was watching from Vancouver.

“My mother’s ecstatic,’’ Myers said. “You talk about how Quentin is known for his toughness. The whole family thinks New York is such a great fit for him. It was so amazing New York picked him and he’ll fit right in to the city and how the game is played there. My mom’s reaction the moment on that video he was drafted says it all.’’

Indeed, a video surfaced of the hotel-room scene as family and friends watched the proceedings amid joyful hugs and tears from Grimes’ and Myers’ mother.

Because the Knicks had traded back in the first round from 21 to 25 with the Clippers and the NBA didn’t announce it, Myers thought Quentin would be playing in Los Angeles.

“They announced Clippers and I didn’t understand the proposed trade,’’ Myers said. “So my initial thought was he was drafted by the Clippers as I was taking a video of it on my phone. I texted my mom. She actually corrected me. I’m like, ‘Did I miss something?’ I was still very excited for him to go to New York.’’

Myers was drafted by the Sabres with the 14th pick in 2008 when Grimes was 9. Grimes traveled to see some of his NHL games. Myers hopes when the Canucks make their annual swing to the New York City-area to face the Rangers, Islanders and Devils, the Knicks will be home.

“It’s been tough to go see each other play,’’ Myers said. “Now that he could be in New York, we have the potential to get to each other’s games.’’

“I was definitely the tallest guy on the team — down low in the paint,’’ Myers said.

Asked who the more athletic brother is, Myers laughed.

“It’s a tough comparison, our sports being so different,’’ Myers said. “Being around Quentin off the ice, you can just tell he’s a very athletic person. I’d like to think I am, too. I take a lot of pride in my skating. It’s one of my stronger parts of my game.’’

The only thing that would make the current circumstance more historic is if the Canucks were to trade Myers to the Rangers.