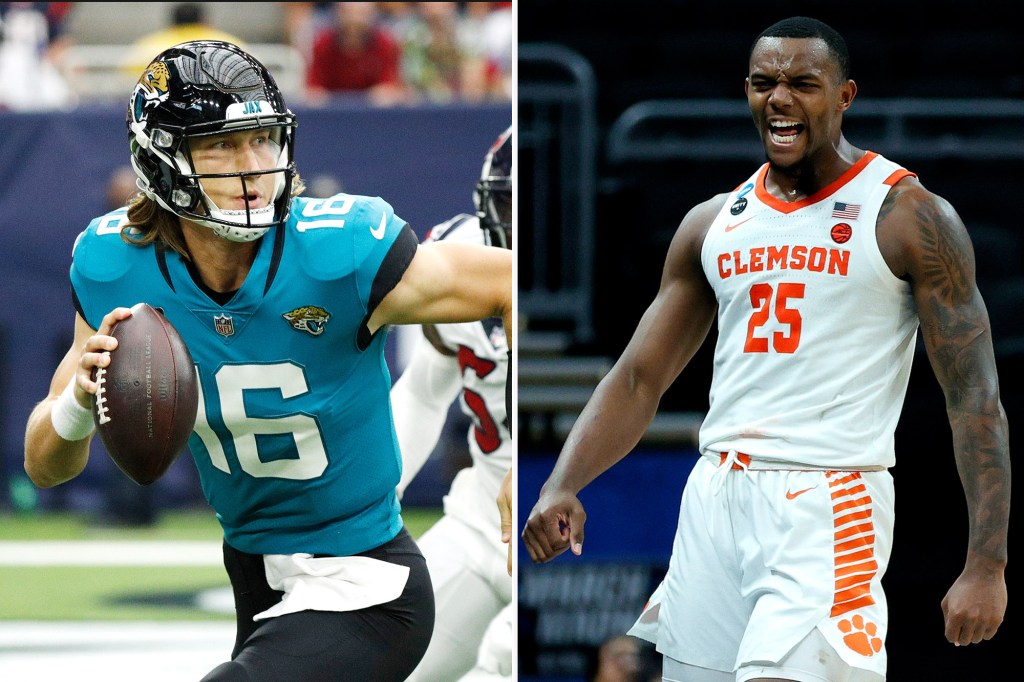 
Aamir Simms, formerly of Clemson, made sure to watch the NFL debut of his college buddy, Trevor Lawrence.

Undrafted in late July, Simms, 22, signed an Exhibit 10 contract with the Knicks for Summer League and to attend training camp.

The 6-8 smallball center is trying to make the Knicks’ 17-man roster as one of the two-way G League signings. If not, he’s got a $50,000 Exhibit 10 guarantee to play for the Westchester Knicks, waiting for an opening.

After Sunday’s voluntary scrimmage in Tarrytown, the Knicks rookie got back to his apartment in Westchester and watched the Week 1 clash between the Jaguars and Texans.

Simms’ friend Lawrence was picked No. 1 overall by the Jaguars.

Across his four years at Clemson, Simms attended a lot of Tigers football games, proudly donning his orange and purple across the spectacular national-championship years. Lawrence’s debut was decidedly mixed with the Jaguars blown out, 37-21, by the beleaguered Texans.

While he threw three touchdown passes and finished 28-for-51 for 332 yards, he also tossed three interceptions.

“I don’t think it was bad,” Simms told The Post. “He doesn’t really make many mistakes in a game. He’s a very smart player, analytical. He remembers when he messes up. He won’t make those same mistakes. It was his first game. I thought he looked good at times making some nice pays. He’ll grow from here.”

Simms and Lawrence developed a bond when the pandemic hit 16 months ago, shutting down all gyms and Clemson’s athletic facilities. Lawrence invited Simms to the house at which he was living off campus. It contained a basketball hoop by the driveway. Simms worked on his skills and Lawrence joined him on occasion.

“We developed a friendship during the COVID year at his house,” Simms said. “It was cement ground, a paved area. But it allowed me to work on my game and stay in shape so when we came back I could be the top of my game. I have respect he invited me.”

Simms, who later tested positive for COVID-19, has traded in the orange and purple for the orange and blue. He’s going back this weekend to South Carolina to catch Clemson-Georgia Tech.

Despite his size, Simms played center his last two years. He knows the NBA is trending that way.

A defense-first big who can guard three positions and shoot the 3, Simms was named Second-Team All ACC last season as a senior. Simms averaged 13.4 points on 40-percent shooting from 3-point range, along with 6.4 rebounds and 2.7 assists.

Most of the Knicks are already in town working out and staging scrimmages in Tarrytown with training camp beginning on Sept. 27. Simms hasn’t gone up against center Mitchell Robinson, who is only doing individual drills.

In the summer league, the Knicks were primarily looking at their four draft picks and returnees Obi Toppin and Immanuel Quickley, so Simms played in just four of the six games. He averaged 11 minutes, 3.8 points and 2.8 rebounds.

Rookie center Jericho Sims, picked No. 58, occupies one of the pair of two-way contracts. The second one is up for grabs.

Simms is thrilled the Knicks called him after he didn’t go in the second round as expected. During his workout, he fell hard for Tom Thibodeau’s defensive culture.

“The pre-draft process, the destination was a key for me, the environment, the atmosphere,” Simms said. “After the draft, I wasn’t surprised the organization wanted me. Thibs is known as a gritty coach who puts defense first.

“That’s what separates him when he shocks people in the league. His teams always play defense and [he] instills belief into the players. It was the same way at Clemson the way (Brad Brownell) ran the team. This fits my game where I can develop under a great coach.”