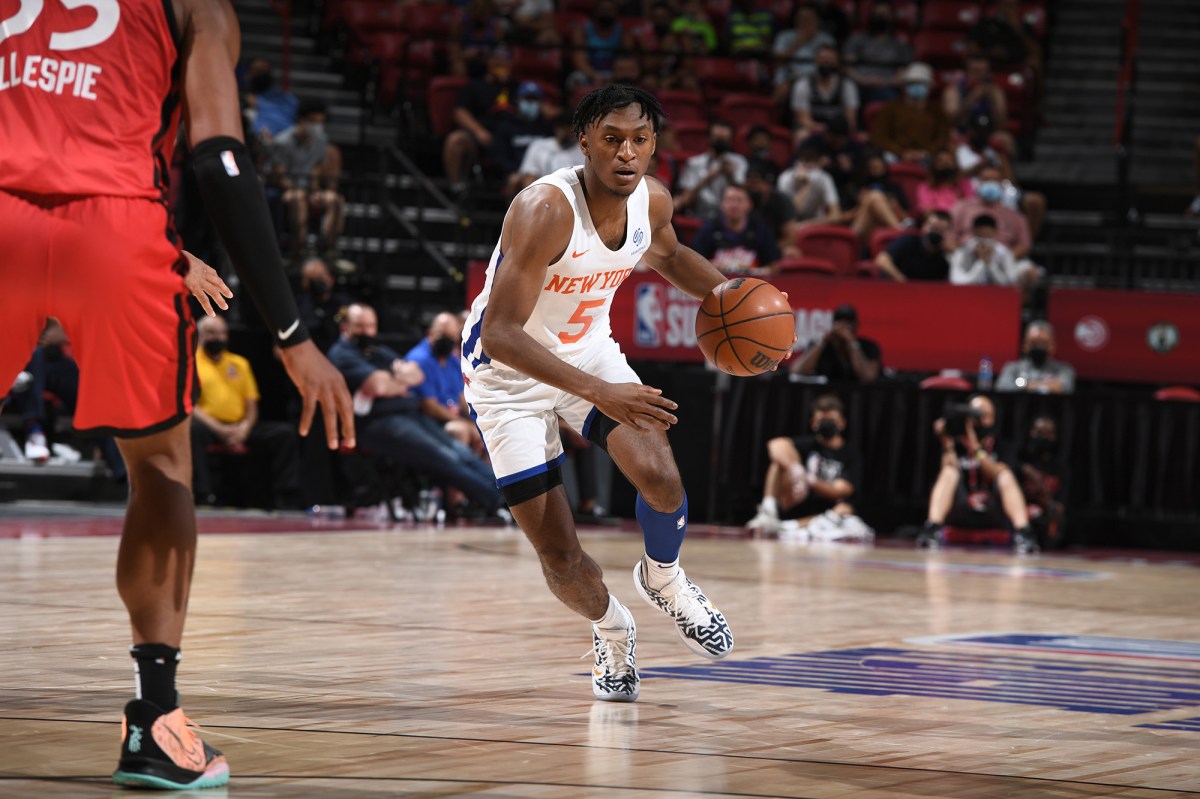 
LAS VEGAS — As an experiment, Immanuel Quickley started at point guard in the Knicks’ summer league opener Sunday at UNLV.

It didn’t work out too well for the 2020 first-round pick.

Quickley, named second-team all-rookie last season, was out of sorts in shooting 5 of 17 — 2 for 11 from 3. He finished with a deceiving 15 points and eight assists but had three turnovers and didn’t look comfortable running the point, mostly because of his inability to get to the basket.

“Quick at the point is something we want to look at,’’ Knicks summer league coach Dice Yoshimoto said after the 89-79 loss. “It’s a point of emphasis it’s something he’s got to get better at. That’s where we’re at.’’

As good as his season went as the 25th pick out of Kentucky, Quickley was more comfortable off the ball — particularly in a tandem with point guard Derrick Rose.

The theory is the Knicks want to expand Quickley’s game, perhaps to increase his trade value. The reason Quickley was not touted higher in that 2020 draft is because of the fear he’d become an undersized shooting guard.

Quickley also struggled in the playoffs as he was no longer getting the foul calls he got earlier in the regular season when he deked and drew contact. In the fourth quarter Sunday, Quickley tried a similar ploy, faking a 3-point shot and moving into his defender. But he coughed up the ball and there was no whistle. Quickley yapped at the official.

Rookie Quentin Grimes, selected 25th in this year’s draft, the same slot as Quickley a year earlier, drilled his first shot on his first touch — a right-wing 3-pointer. But then he misfired more often than not, though he stayed aggressive. He finished with nine points on 3 of 11 shooting.

“I liked him,’’ Yoshimoto said. “I tell him to shoot the ball when he’s open. Don’t hesitate and let it fly. As a team we didn’t shoot the ball well but I liked the shots we got. In a 48-minute game he’ll get more.’’

European prospect, Rokas Joukabaitis did not play despite impressing brass in practice. He has kept his option open on whether he will stay or play for Barcelona this season.

“It’s situational right now,’’ Yoshimoto said. “We want to take a look at Luca [Vildoza] first and see how it goes. If he has the opportunity to play, he’ll play.’’ The Argentine Vildoza got in for eight minutes, didn’t score but had three assists. He was 0 for 3.

The Knicks will face the Pacers at 2 p.m. Monday and go against their prime draft target, swingman Chris Duarte of Oregon. The NBA added the game because the Pacers were unable to play Sunday against the Wizards because of a COVID-19 issue.