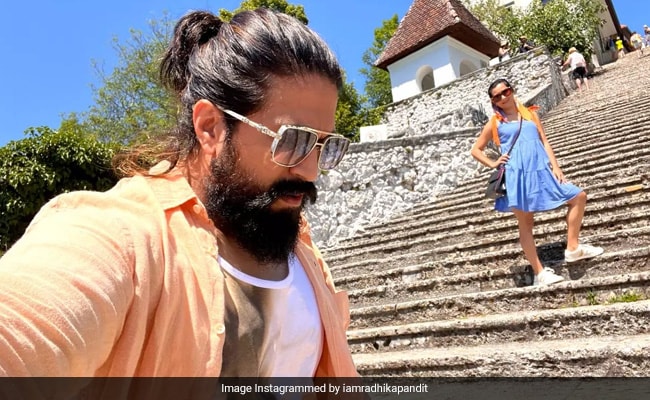 KGF actor Yash’s wife Radhika Pandit has shared stunning pictures from their recent vacation from an undisclosed location, and we can’t get enough. On Instagram, Radhika posted a string of photos that shows them having the time of their lives exploring new places and relishing tasty delicacies amid the beautiful background. Sharing the post, Radhika captioned it as “In the world of Cheese and Gelato.. where the sun hangs out till late! Not reachable at the moment.. lost in a far far away land (heart emoticon) #radhikapandit #nimmaRP”.

Yash and Radhika Pandit are the couple goals and often set major couple goals by sharing mushy pictures on their Instagram handles. A few days ago, Radhika celebrated 14 years of her first film Moggina Manasu, co-starring her husband, Yash. Sharing some adorable throwback pictures from the film,  she wrote, “Well.. these two young people you see in these pics started their film journey with this film 14yrs ago!! Personally, this film has given me so much, A Filmfare award, A State award and a Life partner couldn’t have asked for more!! Thank you E.K sir, Gangadhar sir, Chandru sir, Mano sir and specially Shashank sir for believing in us and giving us this beautiful film Moggina Manasu will always remain special”.

Yash and Radhika Pandit met in 2004 on the sets of their TV show Nanda Gokula. After dating for several years, the couple got married in a grand ceremony in 2016. Now, they are parents to two kids – daughter Ayra and son Yatharv.