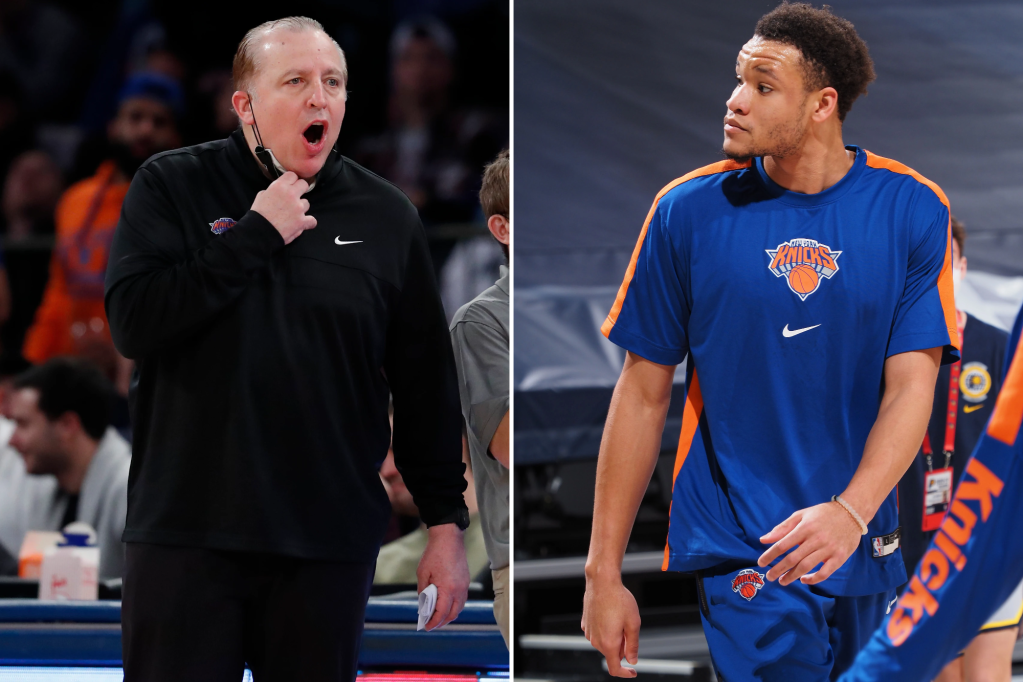 Knicks coach Tom Thibodeau never took a liking to forward Kevin Knox and his stint with the team since being a 2018 lottery pick came to a merciful end Thursday with his trade to the Hawks.

Kevin Knox Sr., Knox’s father who played wide receiver for Florida State and the NFL’s Bills, said some members of the franchise had raised eyebrows over why Knox never got a chance with Thibodeau.

“That’s a great question for Tom Thibodeau,’’ Knox Sr. told The Post when asked why he felt Knox didn’t get a look. “I think we turned the corner. Everybody could see the progression of a young Kevin Knox where he wasn’t really a defensive liability. I think Tom Thibodeau did a great job helping Kevin be a better defensive player. At some point, I think he did become that. He’s always had that stroke and so it become puzzling throughout the organization on why he wasn’t playing Kevin.”

Indeed, Knicks general manager Scott Perry was behind drafting Knox at No. 9 in 2018, when the team president was Steve Mills. Current president Leon Rose probably didn’t have the investment in Knox’s success. According to a source, some club personnel thought Knox should play.

“It can be [a factor] but at the end of the day, it’s not the president who calls the plays,” he said. “It’s not the president who makes the substitutions. The president hires a coach. This coach here obviously felt he can win games without Kevin Knox. To be able to go to another team, you can’t help be excited because you can have the opportunity to have a chance to play meaningful minutes.”

Knox, who hasn’t talked to the media since preseason, is said to be thrilled at the trade, which will bring him closer to his hometown of Tampa, Fla.

“There’s not many miles on the Rolls Royce,” Knox Sr. said.

In the trade, the Knicks received Cam Reddish, who asked out of Atlanta to get more playing time, but has landed in a similar logjam.

“Kevin’s excited,” Knox Sr. said. “He sees opportunity there, a more fast-paced offense to play with a point guard in Trae Young who is an All-Star. He gets in the lane and kicks out to people for open shots. Kevin’s really excited to be coached by Coach Nate [McMillan], a proven coach who played in the league.

“Since he’s been in the league, Kevin’s had three coaches, two presidents, new coaching staffs. Nate sees a breath of fresh air for Kevin.”

Knox has played in just 13 games this season.

“We were looking for a different opportunity to play,” Knox Sr. said. “Hopefully we have found a coach who believes in us and the talent and skill sets Kevin Knox has. It’s a relief.”

Knox was removed from the Knicks’ rotation early last season, then never got a crack at it in 2021-22.

The final straw, however, came last month when, after COVID-19 wracked the team, Knox was needed as a backup power forward and delivered against the Bucks and Warriors. Then, he got COVID-19 and upon his return, was back at the end of the bench.

“He came into the game after not playing and against Milwaukee, he goes 5 of 12 from 3,’’ Knox Sr. said. “The next game he’s nine points and seven rebounds, then we don’t see Kevin anymore. I know it was very puzzling to us.’’

“The agent Aaron Turner talked to Atlanta GM [Travis Schlenk]. This is a trade both parties wanted. Atlanta gets a first-round pick and a young player who is the same age as Cam Reddish. We appreciate the opportunity.”