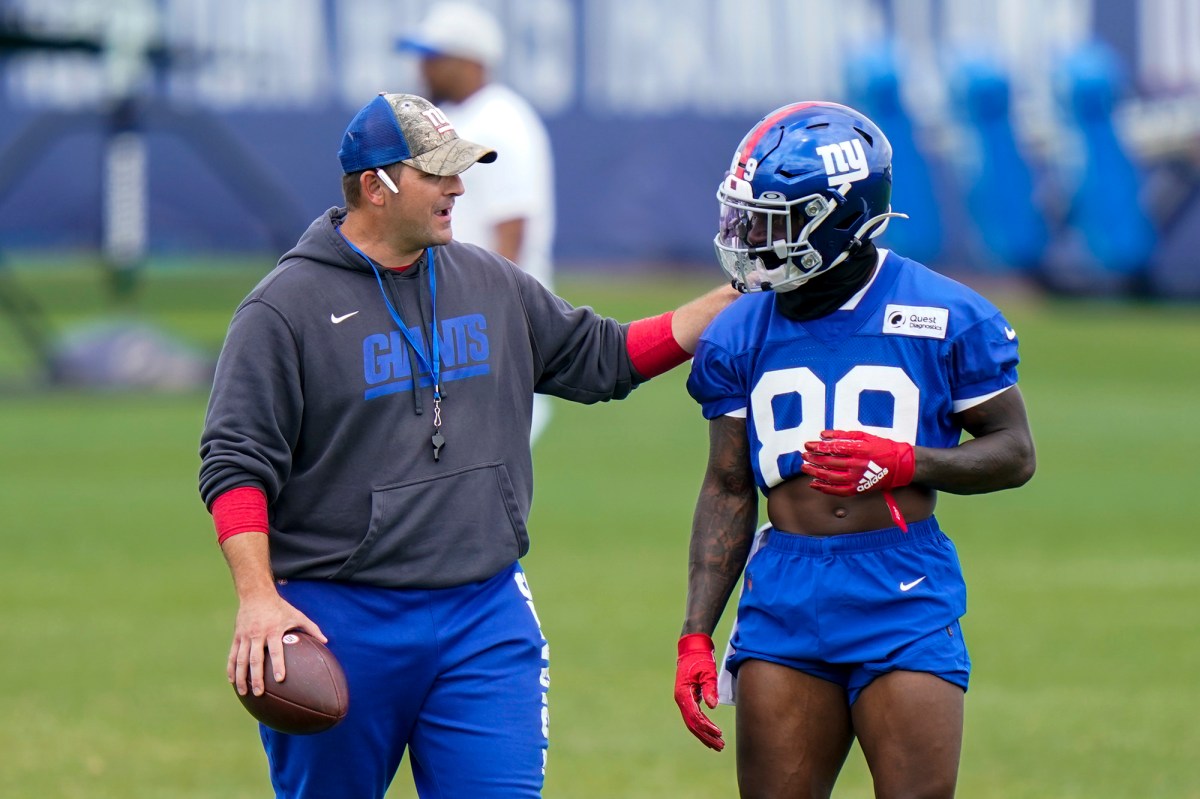 Very few of them show up as polished and NFL-ready as Saquon Barkley.

Most of them have no idea what the transition from college to the pros entails, which is why Kadarius Toney is fortunate he landed at Joe Judge’s Finishing School For New York Football Giants.

The Giants drafted Toney in the first round because they couldn’t help but notice that he is a wickedly dangerous man with the ball in his hands, the kind of weapon Daniel Jones has not had in his arsenal. Eli Manning would throw Odell Beckham Jr. a slant, and just like that … touchdown Giants!

Toney is by no means the second coming of Beckham, but with his COVID isolation behind him, with his one-cleat minicamp faux pas behind him, the Giants are ramping up Toney’s practices and drooling over the prospect of what he can be once he learns his lessons and graduates from Joe Judge’s Finishing School For New York Football Giants.

One day perhaps, albeit with a different skill set and style, he can become Odell Beckham Jr. Lite.

What he can be, what he should be, is a nightmare for defensive and special teams coordinators given no fewer than 10 touches per game as a receiver and returner.

“At any moment, a great moment” was once a Yankees slogan.

This is precisely what the Giants see in Kadarius Toney.

“He’s got some skill set to play inside, outside, backfield, jet sweeps, reverses, he can do it all,” wide receivers coach Tyke Tolbert said.

The password along 1925 Giants Drive for Toney seems to be twitchy.

“Whatever you want to call it, your twitch, your suddenness, cut and separation whatever it is,” Tolbert said, “when he has the ball in his hand, he’s elusive enough to make people miss, and he’s a strong runner, breaks tackles. We just gotta get the ball in his hands and see what he can do.”

By no means do the Giants have buyer’s remorse for favoring Toney over Elijah Moore, the talk of Jets camp. For now, Toney is a tantalizing piece of unmolded clay.

“Guys like him play high school quarterback, and he started at Florida as a quarterback, so he’s behind the eight ball from a lot of guys who played receiver all their life,” Tolbert said, “but he has definitely the physical tools to work with.”

“Anquan Boldin was a high school quarterback, he was Mr. Florida in football,” Tolbert said. “I had him in Arizona, he was Rookie of the Year. I’m not saying Kadarius is gonna be Rookie of the Year, but guys like that who are athletes and do a lot of things. … I’ve had those kinds guys, and everybody learns different.”

Judge and Tolbert have been impressed with Toney off the field.

Offensive coordinator Jason Garrett: “We’re excited about Kadarius. … You can tell he’s someone who picks up football easily, we saw that in the rookie minicamp.”

Judge doesn’t care who you are or who you think you are or where you are from. And neither does special teams coordinator Thomas McGaughey.

Toney was Big Man on Campus at Florida. Not in East Rutherford. Certainly not yet.

“He has speed, he has quickness, all of those things, but … this ain’t the Swamp, this is the Meadowlands, it’s a little different,” McGaughey said.

Toney wore a black balaclava and flashed his diamond-studded silver grill in his abbreviated media session.

“You say am I behind?” he asked a reporter who suggested he was behind.

“Nah, I feel like I’m getting better every day, learning the playbook day by day more.”

During practice, Judge squibbed some punts to him.

“That was kinda exciting honestly like having hands-on with the coach. … That’s the kind of relationship you would like to have,” Toney said.

Me: ‘Why is returning so much fun for you?”

Me: “You like the ball in your hands, that’s why?”

What, the kid never read Keyshawn’s “Just Give Me The Damn Ball”?

“I think the biggest thing for him is being a pro,” Tolbert said. “There are guys who come into the league and just don’t know how to be a pro, used to having a lot of structure, people telling ’em what to do all the time. Here in the NFL, you’re here for a little bit, then you’re off 6:30, 7 o’clock wherever it is, and you’re on your own a lot. So doing the right things when you’re away from here, eating right, getting your proper rest, all that stuff, getting treatment. And for him, he was behind the eight ball a little because of COVID, so that was unfortunate.”