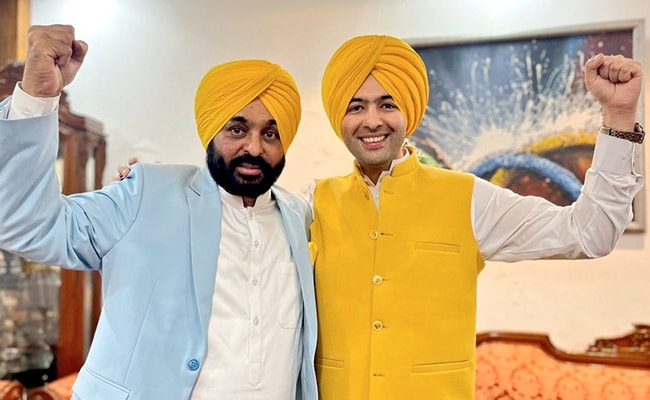 Punjab Chief Minister Bhagwant Mann is all set to get married in a private ceremony in Chandigarh on Thursday. Ahead of the big day, wishes are flowing in from all quarters for the Aam Aadmi Party leader. Of these, one message from his fellow party member, Raghav Chadha has won the Internet.

Sharing a photo of himself along with Mr Mann, Raghav Chadha quipped, “Chhote da number vadde ton baad hi aunda hai. (The younger one’s turn comes only when the elder one is settled). Best wishes to my vadde veer [elder brother] Bhagwant Mann Saab and Dr Gurpreet Kaur for a happy and blessed married life.”

The image shared on Instagram also contained a screenshot of a tweet that said, “And, one thought that Raghav Chadha was the most eligible bachelor in AAP.”

Mr Mann and Gurpreet Kaur will tie the nuptial knot in the presence of close friends and family. AAP leader and spokesperson Malvinder Singh Kang told PTI, “[Bhagwant] Mann Sahab is getting married in a private ceremony here tomorrow. He will tie the knot with Dr Gurpreet Kaur.”

Delhi Chief Minister Arvind Kejriwal, who is also the chief of the Aam Aadmi Party (AAP), is expected to attend the ceremony.

This is the chief minister’s second marriage. Bhagwant Mann, who was a former stand-up comic, divorced six years ago. He has two children from his previous marriage. The leader’s ex-wife and children currently stay in the US. They were present for Mr Mann’s oath ceremony earlier this year.

After AAP won the Punjab election earlier this year, Mr Mann took over as Chief Minister after ousting Congress.