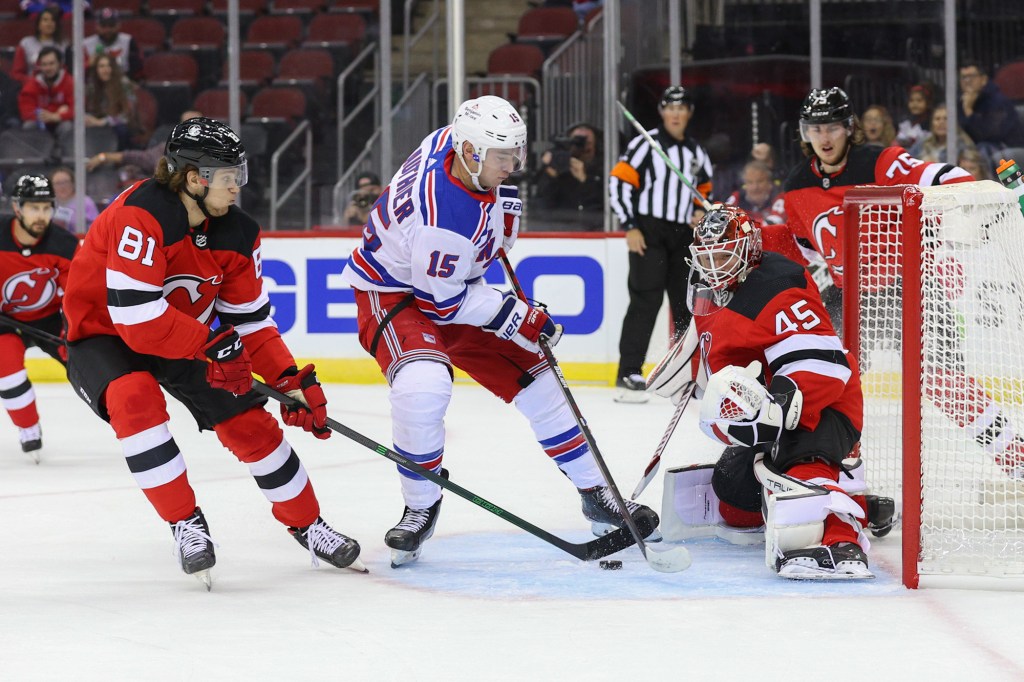 
Vitali Kravtsov has taken a majority of the reps at right wing on a line with Filip Chytil and Barclay Goodrow through Rangers training camp, but Julien Gauthier got a look in that spot in a lopsided preseason loss to the Devils on Friday night.

When Kravtsov was ruled out for the remainder of the game after the first period with a lower-body injury, however, all eyes were suddenly on Gauthier.

After the 7-1 thrashing at Prudential Center, Rangers head coach Gerard Gallant said he didn’t believe Kravtsov’s injury was serious or long term. But if it turns out to be, the 23-year-old Gauthier showed some flashes of why he could be considered the “next man up” in the Rangers’ lineup.

“I can’t say anybody was good, when you [give up] seven goals and you only get one,” Gallant said after the loss, which dropped the Blueshirts to 1-2 in the preseason. “But the kid Gauthier was probably one of the better players on our team tonight.”

Gauthier, who was often a healthy scratch and limited to just 30 games last season, added another element of physicality to the line with Chytil and Goodrow. As he usually does, Gauthier used his 6-foot-4 frame to drive to the net and create some havoc.

Despite uncertainties surrounding the right-wing spot on their line, Chytil and Goodrow have continued to show signs of budding chemistry. There was one play on which Goodrow, who registered an assist on Mika Zibanejad’s power-play goal in the first period, sent a slick cross-ice pass through the crease to Chytil. The puck was ultimately poked away before the Czech could get a shot off.

It will certainly take time for Chytil and Goodrow to get a feel for each other on the ice, but there were plenty of encouraging signs Friday that the two could complement each other well.

“It’s not the ending we wanted with the score, but we had some good looks,” Gauthier said of his line. “[I had] a two-on-one with Fil, a couple of drives to the net, I feel like the chemistry wasn’t bad at all for our first game together.”

After a red-hot start last season, Chytil suffered a hand injury that he recently revealed lingered well after he returned to the ice. In addition to a 10-day stint on the COVID-19 list, Chytil was sidelined for 14 consecutive games and never quite regained the kind of explosive play with which he started the season.

The nagging hand injury affected his ability to take faceoffs, which have been a problem for the Rangers for quite some time. The Blueshirts have finished either last or second-to-last in faceoff win percentage in the NHL in the past three seasons, posting a league-worst 44.5 percent last season.

Goodrow won 50 percent of his faceoffs for the Lightning last season, which is higher than any full-time player on the Rangers. Asked if he expects Goodrow to take a lot of faceoffs for his line, Gallant said he expects Chytil to improve, but Goodrow will certainly step in from time to time.

“Now, if there’s some big faceoffs and we think Goodrow can do a better job, he may go in and take a few,” Gallant said Friday morning. “Not just for Chytil, but for a different guy. That’s the makeup of our team but you want your confidence in your centerman. It hasn’t gone well but it’s a new year.”

The idea of moving Chytil to the wing has been tossed around and the Czech said he would play wherever Gallant put him, but he declared his preference to stay in the middle. Now, Chytil has a chance to fortify a new-look third line alongside the gritty Goodrow.

Yankees haven’t made it easy — even to the very end