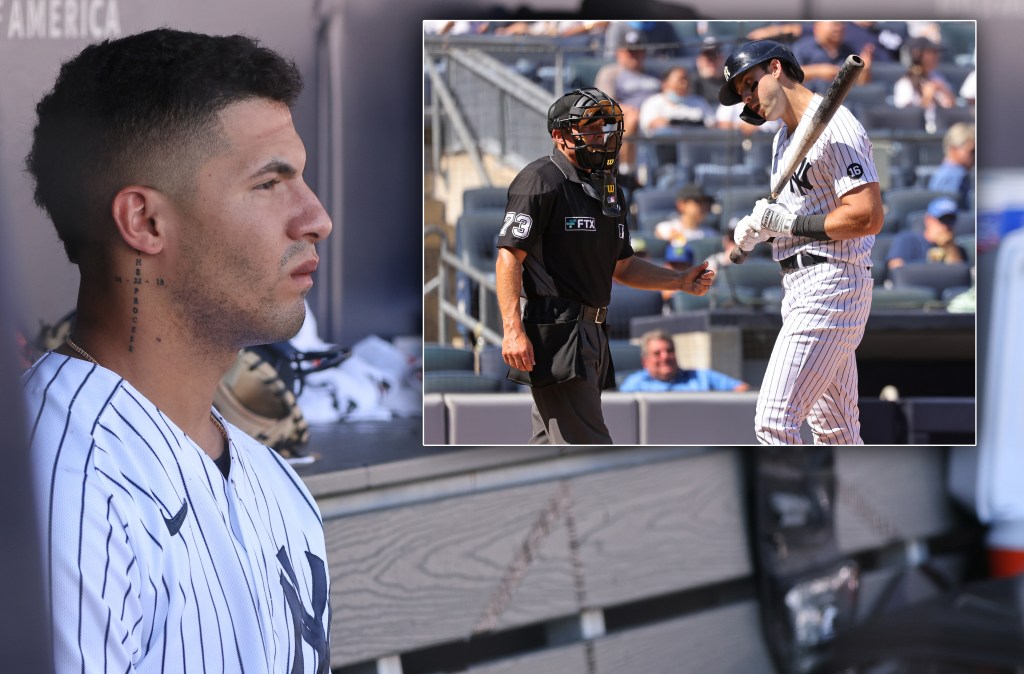 Joey Gallo no longer can bat second for the Yankees. A strong case exists that he should no longer be in the lineup altogether. To date, he has been the Javier Vazquez of hitters, looking as if he belongs in New York as much as a cheetah on Fifth Avenue.

Gleyber Torres can no longer be the Yankees’ everyday shortstop. The exchange was always tolerating iffy defense in exchange for impact offense. But the ball just hasn’t come off Torres’ bat with any life this season — and the ball keeps finding his inadequate glove.

Gallo and Torres are not the lone culprits in the Yankee offense returning to something Alvaro Espinoza dragged in. But the Yankees can do something about those two. Aaron Judge and Giancarlo Stanton can flank Brett Gardner in center, Luke Voit can DH and Gallo can more regularly become a late-game lefty threat or defensive substitution. I would be shocked if — at minimum — Gallo were not on the bench Tuesday with Toronto starting lefty Steven Matz.

As for shortstop, Andrew Velazquez or Tyler Wade can start and bring better defense and athleticism/speed. Plus, really, how much offense would be necessary to outperform this version of Torres?

Gallo and Torres combined to go 0-for-7 Monday with six strikeouts as the Yankees managed just five singles all game, never even got a runner to third and lost 8-0 to the Blue Jays.

“We’ve got to get it rolling offensively.” Aaron Boone. “We have to do better than that.”

Since winning 13 in a row, the Yankees have lost seven of nine, hitting .202 and averaging 3.6 runs a game. For a while, Judge and Stanton were covering for others. But over the last three games, that duo is hitless in 24 at-bats with 11 strikeouts. They have, however, been the Yankees’ best hitters this year. They are not coming out of the lineup. The fixes must come elsewhere, as difficult as they may be.

After all, Gallo was the Yankees’ big trade-deadline acquisition. Torres was supposed to be a core piece for a while. The Yanks were operating well for an extended period with secondary players bringing energy; Greg Allen initially and then Wade and Velazquez. The Yanks were stealing bases (they have one in their last 10 games), playing crisper defense and riding an underdog spirit.

It is never simple to tell if that is a blip by reserves and that playing them more will expose all they are not. Before the Labor Day game, I asked Boone about this and he said he “certainly considers” the intangible elements the backups were providing. But he also said the Yanks were winning a lot before the 13-game win streak and “Gleyber was in the middle of that.”

However, it is hard to ignore not just Torres’ defensive miscues on Sunday and Monday, but a lack of impact in his game. The only major leaguer with fewer extra-base hits than Torres’ 23 with more plate appearances than his 420 is Kansas City’s Nicky Lopez (21 in 453). Lopez, though, is a brilliant defensive shortstop yet to be caught in 19 stolen-base tries. Torres actually has 12 steals, but whoever thought he’d have twice as many thefts as homers?

Meanwhile, Boone keeps insisting Gallo’s skills make him an ideal No. 2 batter because of his power, hitting eye and historic ability to avoid double plays. But the Yankee manager cannot keep playing a theory. Gallo has 16 hits since joining the lineup on July 30. Sixteen! He has struck out in 61 of 123 at-bats. He is 1-for-his-last-25. The one was a two-run homer that tied Saturday’s game. But with Gallo, his homers are more about the ball hitting the bat than the other way around — there is little adjustment to the situation or the scoreboard.

Boone talked about getting “Joey comfortable.” But it has been nearly six weeks now and Gallo was still talking Saturday about things like adjusting to traffic in getting to Yankee Stadium — by the way, most Americans deal with hassles getting to work. Gallo seems to be overthinking and over-complicating himself into problems. He can use a bit of a timeout as the Yanks try to reanimate their overall offense.

Anthony Rizzo said of the unit that he’d “rather struggle now than later in the year.” But it is later in the year. There were 26 games left beginning Monday and half for the Yankees were against the Blue Jays, Red Sox and Rays, including nine to end the season. Those three have among the majors’ best offenses. The Yankees were supposed to be in that sentence, especially after obtaining Gallo and Rizzo.

The Yanks are going to have to match runs with these clubs. That can be done with Gallo and Torres at their best. They haven’t been. And there is not much “later in the year” to get them going.

How Michael K. Williams got the trademark scar that helped launch his career