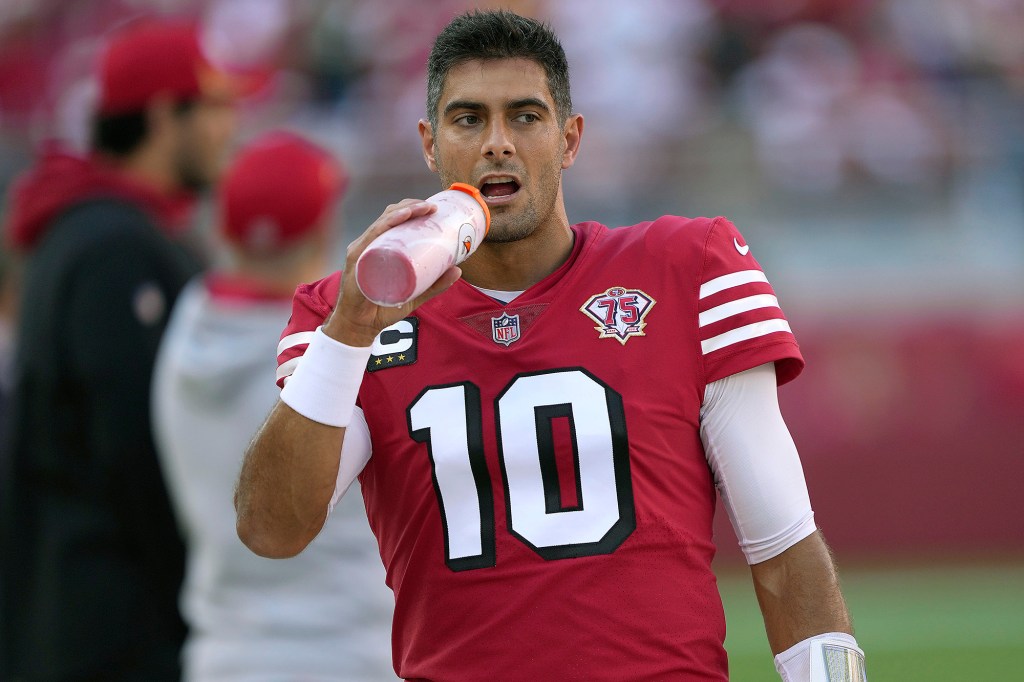 
Jimmy Garoppolo has had about as bad a week as one can have while still keeping their job.

San Francisco 49ers head coach Kyle Shanahan confirmed Garoppolo would start on Sunday against the Bears, but did so in perhaps the least certain terms possible. After losing to the Colts, 30-18, on Sunday night, Shanahan said it was Jimmy G’s “worst game” of the season (he went for 181 yards, a touchdown, two interceptions and a lost fumble).

Shanahan also announced that Trey Lance would return to practice this week, and possibly come in for a few plays against Chicago despite dealing with a knee injury.

“Trey’s coming off a pretty big injury, and we’re gonna keep bringing him along and keep getting him prepared as good as you can be to always be ready to come in and help on the plays that we ask him to do,” Shanahan told reporters.

Garoppolo will now spend all week with Lance breathing down his neck after the rookie signal caller was inactive against the Colts. And despite the injury, there appears to be some urgency to get him on the field in some capacity – not exactly the best omen for the incumbent starter.

Garoppolo has also faced outside criticism about his play, notably from former 49ers star Donte Whitner. After the loss to the Colts, Garoppolo talked about the struggles from the team as a whole: “Whatever play is called, we just have to go out there and execute it.”

Whitner viewed it as skirting responsibility for his subpar play, and laid into the quarterback on NBC Sports Bay Area.

“I hear a lot of excuses coming out of Jimmy’s mouth,” Whitner said.

“Jimmy, we understand that. You’ve been saying that forever. ‘We have to execute,’ yeah you can’t throw the ball to the defense. You have to take care of the ball when you’re in the pocket. The ball is slippery, you’re holding it like nobody is going to tackle you. These are things that lead to losses. Turnovers directly correlate with wins and losses.

“I hear a lot of excuses there. With better leadership, with better throws, with a better understanding of the offense. With a little more fire and they possibly get out of here with a win today. I understand everything he’s saying, but they still have to make the correction. You better do it quickly, or it’s going to be Trey Lance’s turn.”

And as if the embattled signal caller needed one last hit to take, he ended up being the butt of a joke during a game in which he didn’t even play. Tom Brady was a guest on the “MNF” Manningcast, and the Manning brothers flashed to the moment where the Patriots won Super Bowl XLIX on Malcolm Butler’s famous last-second interception at the goal line.

In the clip, Brady jumps up and down out of excitement – and Garoppolo, then Brady’s backup, runs over to try to celebrate with him. Brady appears to dismiss him completely.

“I wanna talk about how you had Jimmy G right there and you completely ignored him,” Eli Manning said on the broadacst. “Said, ‘I’m not gonna give you a high-five.’ And just nothing. ‘Nope, you get nothing’.”