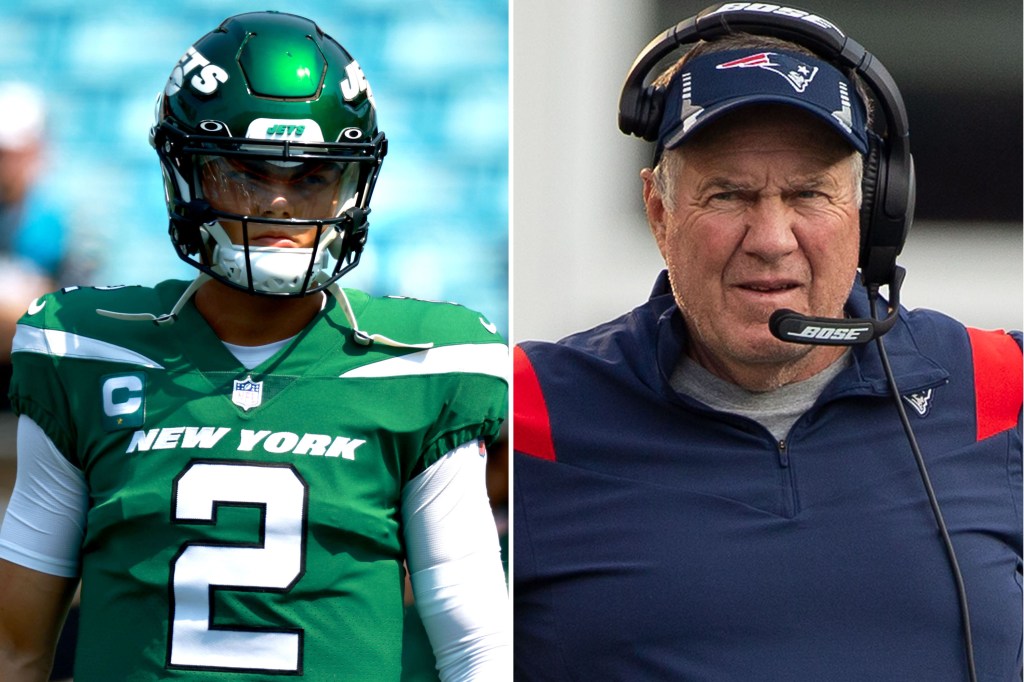 
Zach Wilson’s many welcome-to-the-NFL moments this past Sunday didn’t get him down.

As he was getting pummeled by the Panthers, and then reliving what went right and what wrong in his debut, the Jets’ latest quarterback hope found enjoyment in the struggle.

Most of his life was about working to get into this position. Now that he’s here, Wilson understands how difficult the job is. But that’s what makes it so exciting for him.

“It’s awesome,” he said Thursday. “Sometimes I just sit back and smile like, ‘This is so cool.’ ”

With that attitude, this coming Sunday afternoon will be a blast for the young quarterback.

He will get his first of what likely will be many encounters with The Hoodie: defensive mastermind and legendary coach Bill Belichick of the rival Patriots. There are going to be more learning moments for the second-overall pick in this year’s draft.

“There’s nothing better when you go out there against the Patriots and they maybe smack you in the mouth on one [drive] then you stand up and you hit a big throw down the field [on the next one],” he said. “That’s the fun part of the game. You never know what you’re going to get.”

Belichick is notoriously tough on young, inexperienced quarterbacks. Two years ago, Sam Darnold, then the Jets’ second-year quarterback, was intercepted four times in a lopsided loss on “Monday Night Football.” That wasn’t even the most embarrassing part of the evening. Darnold, wearing a microphone, was heard on national TV saying he was “seeing ghosts.” Darnold, who knocked off the Jets and Wilson last Sunday in his first game with the Panthers, never beat the Patriots, going 0-3 and throwing just one touchdown pass. The Jets last defeated New England six years ago, and have lost 10 straight to Belichick’s team.

Wilson will be the latest Jets quarterback hoping to get the better of Belichick. Some have had success. Mark Sanchez once beat the Patriots in the playoffs and Geno Smith defeated them as a rookie. That, of course, was a long time ago, and the Jets were significantly better then.

Wilson gave the Jets reasons for optimism in the opener, shaking off a poor start to finish well in a 19-14 road loss. Despite the sacks, the 10 times he was hit and 11 pressures that tested his resilience, he threw a pair of second-half touchdown passes and ended the day 20-for-37 for 258 yards. He had a solid 82.9 quarterback rating though he was pressured in some fashion on 62.8 percent of his dropbacks. After the game, Wilson said it felt like he got hit by a truck and he was dealing with a “little whiplash.”

The offensive line came under fire after the performance, but Wilson took responsibility, too. He needs to improve, and he wasn’t talking about his passing statistics. He faulted himself partly for the beating he took. He occasionally held the ball too long, in particular on his first sack. Wilson said he should’ve read the blitz better and found his running back in the flat. There also are other ways he can help the offensive line.

“It goes hand-in-hand and so, that’s kind of why it’s a little bit skewed as far as six sacks is all on the O-line,” Wilson said. “It’s definitely team-wide and, for one, me just getting the ball out quicker, understanding that those guys are all teeing off up front and how can I just help those guys out and get the ball out of my hands [is important].”

Wilson said the Jets have adjustments they can make to ease the pressure he will face on Sunday. Belichick will no doubt adjust to whatever they do and the young quarterback can’t wait to see what his second NFL game will bring.

“I really just enjoy the challenge of this,” he said. “Our job is never the same, every single day we’re always looking at something new. I think that’s going to be the exciting part for this week. It’s going to be fun.”

Lauri Pajuniemi gets up-close look at his Rangers ‘dream’