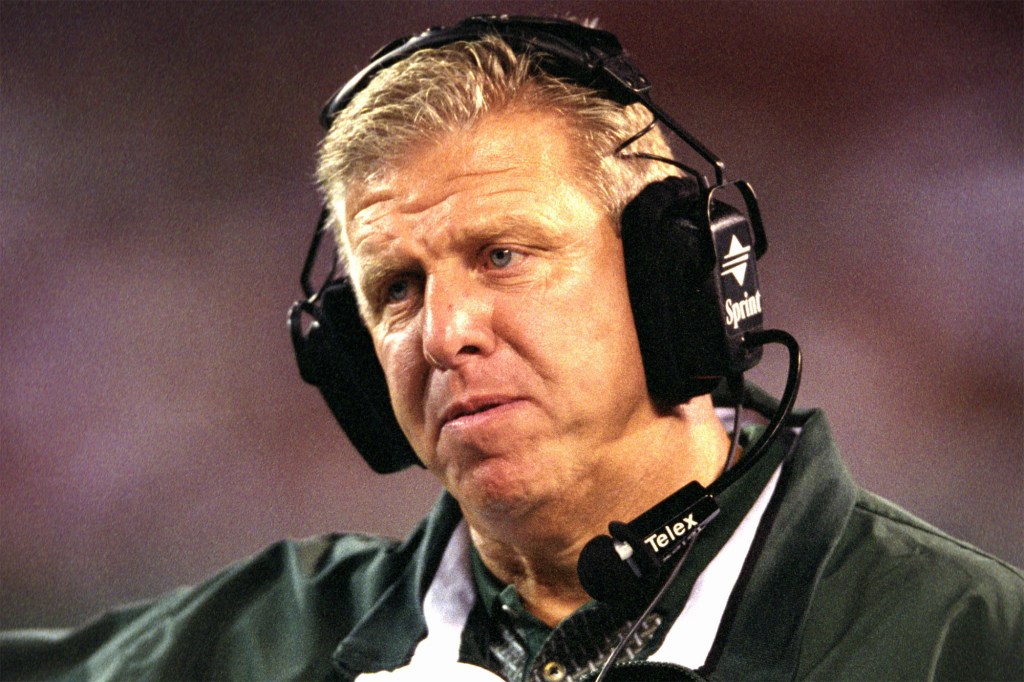 The Jets were going to win the Super Bowl and write one of the great stories in modern American sports. They were 1-15 when Bill Parcells took over, and two seasons later they were in the 1998 AFC Championship game in Denver, leading John Elway and the defending champs 10-0 in the third quarter.

This wasn’t about just reaching the Super Bowl for the first time since January 1969, and returning to South Florida, where Joe Namath had honored his guarantee by toppling the mighty Colts. The Jets had beaten the Falcons by 25 points in the regular season. They were not going to lose the rematch in the big game.

So whenever the Jets play the Broncos, the images from that lost Mile High Stadium day are alive in the minds of those who were there. The 1998 Jets had two 1,000-yard receivers, Keyshawn Johnson and Wayne Chrebet; a future Hall-of-Fame running back, Curtis Martin; a defense that had allowed a league-low 16.6 points per game; a Pro Bowl quarterback having a career year, Vinny Testaverde; and two of the best coaches of all time, Parcells and defensive coordinator Bill Belichick.

Team owner Leon Hess, known for fielding loser after loser, was finally getting his day in the sun. This was his year … until it wasn’t. Until his Jets were blown away by the swirling Mile High winds.

“That might be the most disappointing loss I’ve ever had,” Parcells told The Post on Friday. “Mr. Hess was getting older and I was really hoping we could do something for him. That was really the essence of my sadness. I knew he didn’t have many more shots at it.”

Before that game, after watching the Falcons stun the Vikings for the NFC title, the Jets knew they were 60 minutes of football away from a winning Super Bowl proposition.

“We all felt we were better than Atlanta, no question about it,” cornerback Ray Mickens recalled. “It was a shocking loss by Minnesota, so we felt Denver was our Super Bowl.”

The Jets thoroughly outplayed the Broncos in the first half, outgaining them by 120 yards. Testaverde completed his first 13 passes while Elway started out 1-for-8 for 6 yards. But the Jets couldn’t finish off their drives, and settled for a 3-0 halftime lead.

“We felt great about our chances going into the second half,” Mickens said. “Belichick hardly had to make any adjustments because we were playing so well defensively.”

Early in the third quarter, Blake Spence, the Jets’ third-string tight end, blocked a punt that led to Martin’s 1-yard touchdown run and a 10-0 lead. The crowd of 75,000-plus started to groan and boo. But on the first play of the next possession, Elway became Elway again. He found Ed McCaffrey for a 47-yard gain that suddenly changed the mood of the game — permanently.

Two plays later, Elway threw an 11-yard touchdown pass to Howard Griffith. The winds, which were gusting up to 40 mph, altered Jason Elam’s ensuing kickoff, bouncing it away from the Jets’ Dave Meggett and into the Broncos’ hands. It was an ominous sign of things to come. Denver ripped off 20 unanswered points over 11:38 of the third quarter, and the Jets couldn’t recover. They lost, 23-10, because they had four fumbles among their six turnovers, including one from rock-solid Keith Byars.

To punctuate his final home game, Elway did a little victory lap on the field. Parcells looked like a broken man in the Jets’ locker room.

“We helped them beat us a little bit,” he recalled. “It was a very tough day. It’s a results business, and the results weren’t what I had hoped for.”

Mickens, now a Dallas-area owner of airport restaurants, said he remains haunted by a pass breakup on Denver’s Rod Smith that he believes should’ve been a pick-six.

“You bringing this up is just making me mad again,” he joked over the phone. “Parcells and Belichick had us so prepared, we were basically calling out Denver’s plays before they ran them. I just wish we could’ve gotten it done. That would’ve solidified everything for that team.”

Instead, on the rebound, Testaverde blew out his Achilles tendon in the 1999 season opener.

“It was like a piece of every one of us was being carted off the field with him,” Martin said that day.

Parcells stepped down after the Jets went 8-8 in 1999, Belichick ran his fastbreak to Foxborough and, well, you know the rest.

All these championship-free seasons later, the Jets will be back in Denver on Sunday.

“I can still hear Parcells speaking to me, while sitting on my shoulder,” Mickens said. “His favorite line to me was, ‘Almost ain’t good enough.’ ”