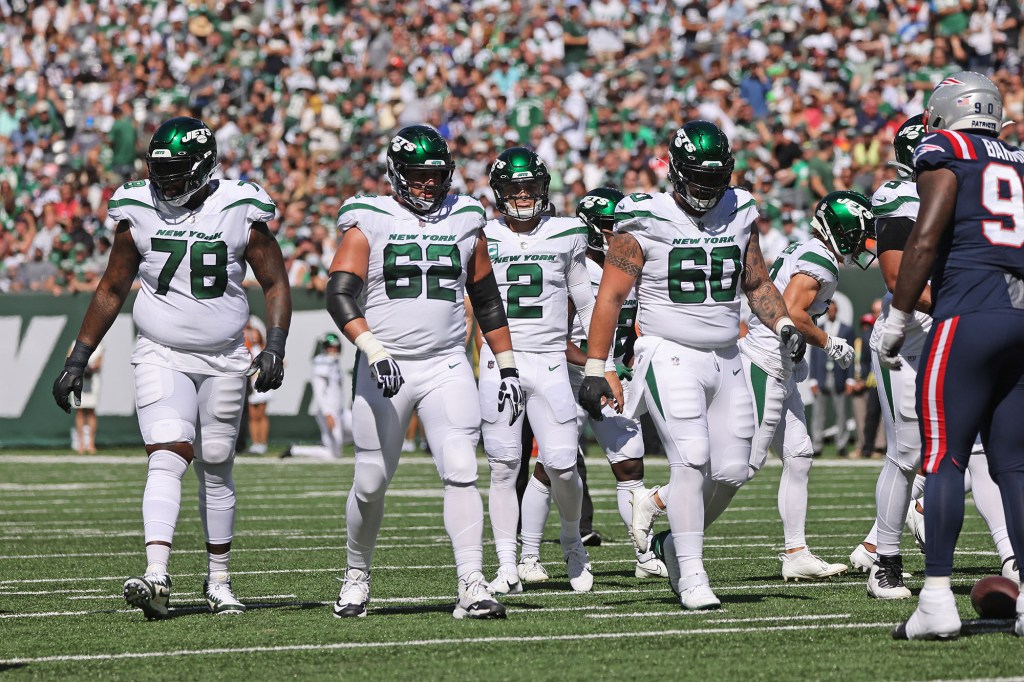 
There was more time for Zach Wilson to throw. There were actual holes for running backs Michael Carter and Ty Johnson to run through. There were far fewer missed assignments.

After being criticized for being no-shows through most of the regular-season opener, the Jets’ offensive line responded in a Week 2 loss to the Patriots — despite the absence of left tackle Mekhi Becton — with an improved performance.

While the four sacks the Jets gave up against the Patriots were nothing to boast about, two of them came on the final drive with the game well out of reach. Wilson was hit seven times by New England, down from 10 the previous week against the Panthers. McGovern and left tackle George Fant allowed just one quarterback pressure each, according to Pro Football Focus, although right guard Greg Van Roten struggled, giving up a whopping seven.

The biggest difference, though, was in the rushing attack. After being held to 2.6 yards per carry by the Panthers, with 45 yards on 17 attempts, they churned out 152 yards on 31 attempts, or 4.9 yards per carry, against the Patriots. The unit looked far more comfortable in the Jets’ new outside-zone rushing scheme, which is predicated on offensive lineman moving horizontally and making blocks down the field.

Offensive line coach John Benton singled out the progress made by rookie left guard Alijah Vera-Tucker and, he said, across the board the chemistry and cohesion the group had stood out. The current five were together for the last few weeks of training camp, while Becton, now out up to two months with a knee injury, was sidelined with a concussion.

“There is something to guys playing consistently next to each other and the subtle things that go on, you can argue,” Benton said. “This group had more time together than with Mekhi, so there was probably a little bit with that.”

Now the Gang Green offensive line must build on its momentum. It won’t be easy. The Broncos, led by eight-time Pro Bowler Von Miller, have been stingy so far this season. They have allowed just 26 points in two wins, giving up just 135 total yards on the ground on 36 carries. They only have three sacks — all by Miller — which is partly by design. Denver doesn’t blitz much. Its defense is known for knocking down passes at the line of scrimmage. From 2015-20, the Broncos’ defensive line had an NFL-high 83 passes defended.

“It’s like their thing,” McGovern said. “It’s a little bit of a wrinkle these guys present.”

One potential advantage the Jets have is McGovern is familiar with the Broncos’ defensive personnel, especially up front. He played there for four years, before joining the Jets last season.

“The D-line is the same guys I played with when I was there, so my scouting report, my personal scoring report, is a little easier this week,” McGovern said. “I don’t have to watch quite as much film to know exactly how these guys play. I’m definitely fired up to go back and battle some old teammates.”

Evan Engram is ready to help end the Giants’ losing