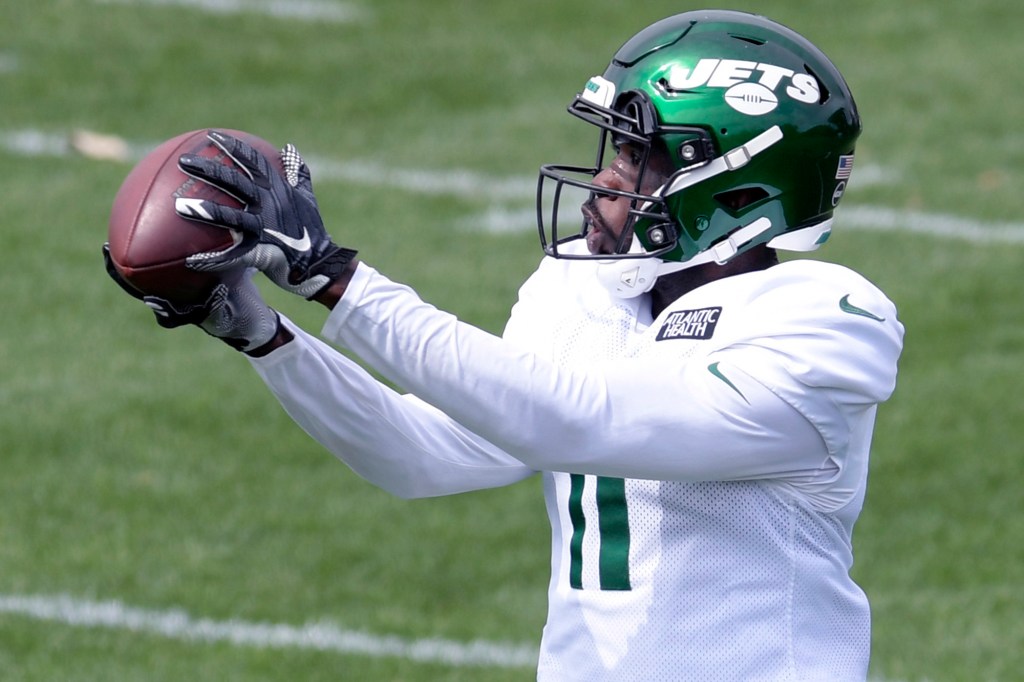 
The curious case of Denzel Mims took another turn Sunday.

The second-year wide receiver was a healthy inactive for the Jets’ 25-6 loss to the Patriots at MetLife Stadium. It was the latest indication of just how much the new Jets coaching staff does not trust the 2020 second-round pick.

Mims played just three snaps in Week 1, catching one pass for 40 yards, after a training camp when he was buried on the depth chart and then suffered a hip injury.

“Denzel, he had a real good week of work,” Saleh said. “He’s just got to continue on what he did and just understand that there’s special teams involved. There’s the Z, the X and if he can capitalize off what he did this week, I don’t anticipate this being much longer. At the same time, I don’t see Jeff and Keelan and all those guys relenting. They’re every bit as deserving of being on the football field, too.

“He’s got to be better than those guys. That’s the bottom line.”

Smith had one catch for 35 yards on two targets. Cole did not get a target in the game.

The Jets were also without WR Jamison Crowder, who came off the COVID-19 list on Thursday. He was expected to play but Saleh said a lingering groin injury kept him out. Crowder had been dealing with a groin injury before he went on the COVID list and Saleh said it flared up Friday.

Jets’ top receiver Corey Davis only had two catches for 8 yards. He also let one of Zach Wilson’s interceptions go through his hands.

“I should have had that,” Davis said.

Patriots coach Bill Belichick is known for taking away the opponent’s best option but Davis said New England did not do anything crazy against him.

“A lot of this was just self-inflicted wounds that we’ve got to clean up. We’ve got to be better,” Davis said. “We’re way better than what we displayed out there.”

It looked like the officials blew a call early in the game. On the second play from scrimmage, Patriots receiver Kendrick Bourne appeared to fumble the ball after Marcus Maye stripped it from him. The officials ruled Bourne’s forward progress had been stopped. Saleh wanted to challenge the call but forward progress is not reviewable.

Saleh decided to kick a field goal on fourth-and-9 with 6:14 left and his team down 22-3. Saleh explained that he wanted to cut it 16 points or two touchdowns and two two-point conversions.

“It was a three-possession game no matter how you cut it at that point,” Saleh said. “It was strictly to make it a two-score game and give us a chance.”