Jets defense’s troubling performance may be cause for concern 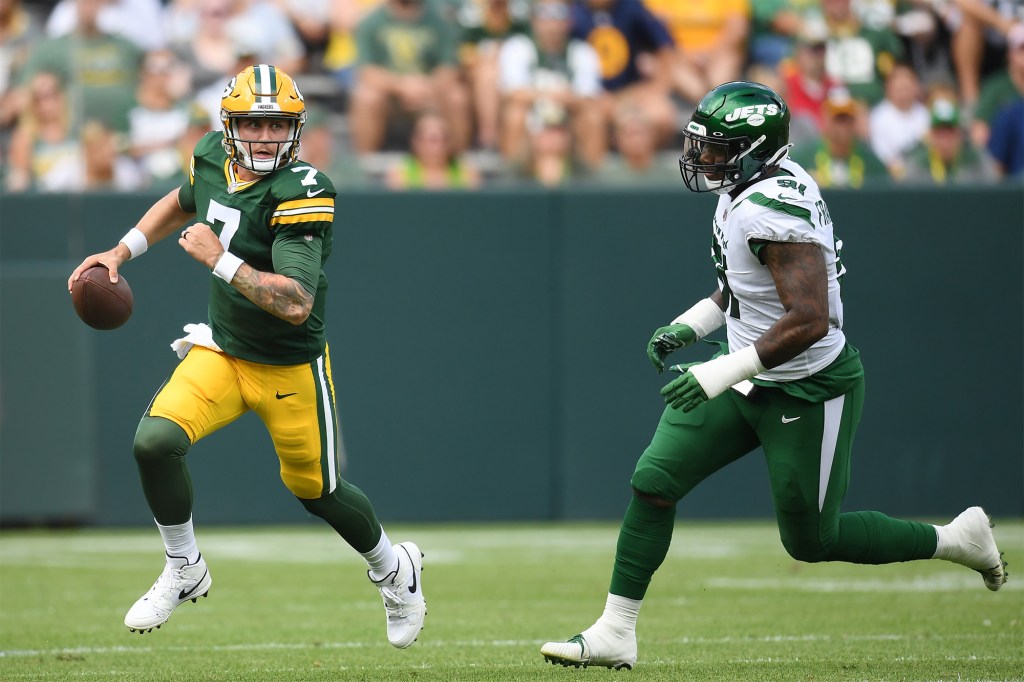 
While most of the focus has been on rookie quarterback Zach Wilson in the Jets universe, the performance of the team’s starting defense on Saturday against the Packers was a bit troubling.

The Jets starters were facing the Packers backups, led by third-string quarterback Kurt Benkert, and gave up two long touchdown drives in the first half.

Is it a cause for concern?

You can’t overreact to anything in the preseason, but the Jets look like they have some things to clean up.

“There’s some things we want to fix, some things that we have to grow on,” defensive tackle Folorunso Fatukasi said. “We understand that there’s a level of play that we want to keep. Once we get home and look at the film, we’ll iron those things out.”

In fairness, the Jets were missing a few starters, too. Beyond Carl Lawson, who was lost for the season Thursday to a ruptured Achilles’ tendon, the Jets did not have defensive tackles Quinnen Williams and Sheldon Rankins, cornerback Bless Austin and safety Lamarcus Joyner available Saturday.

Jets coach Robert Saleh seemed most annoyed with the defense’s performance on third down. The Jets gave up five third-down conversions and one fourth-down conversion on a 19-play, 81-yard drive by the Packers in the second quarter.

“It comes back to third down,” Saleh said. “Obviously, we want to be better on first and second down and stay ahead of the sticks. You look at those third down opportunities and winning one-on-ones on the perimeter; that’s third down. That’s life in the NFL… When you get to those third downs, I mean, that’s back breaking… I think it was a 21-play drive or something like that on one of them. You can look all the way back to third down and getting your one-on-one opportunities and winning when you get that chance.”

The Jets starters did not record a sack of Benkert and did not get that much pressure on him. There were also some troubling holes in the run game against the Packers’ backup offensive line.

Benkert was able to victimize the Jets’ young cornerbacks, particularly rookie Isaiah Dunn, who was playing in place of Austin but has received first-team reps in training camp.

“Again, it goes back to third down,” Saleh said of the corners. “They can be great on first and second down. They can be great the entire game, but it comes down to one-on-one in a third-down situation, especially in those 4-to-7 ranges, and you’ve got to win. Obviously, from a scheme standpoint, we can always do things to mess with the quarterbacks so it’s not so easy for them. But at the same time, in these situations, when we’re trying to get a grade evaluation and trying to get good some clips for them, it just comes down to playing with great technique and winning.”

The Jets may have still been reeling a bit from the Lawson news. The defensive end has been the Jets’ best player in training camp and there was high level of excitement around what he could do this season and mean to the defense. To see him on the ground Thursday before being carted off and ruled out for the season was a blow for this team.

“Losing Carl was, to be honest, was a breath-taker,” Fatukasi said. “But one thing we understand, especially after talking to him, is he doesn’t feel sorry for himself. He tells us that, ‘Yo, the standard has to stay high. You guys have to keep performing.’ With that being said and hearing those words from him, we understand what we need to do and how we need to keep progressing forward.”

Indian envoy interacts with heads of US universities – World News