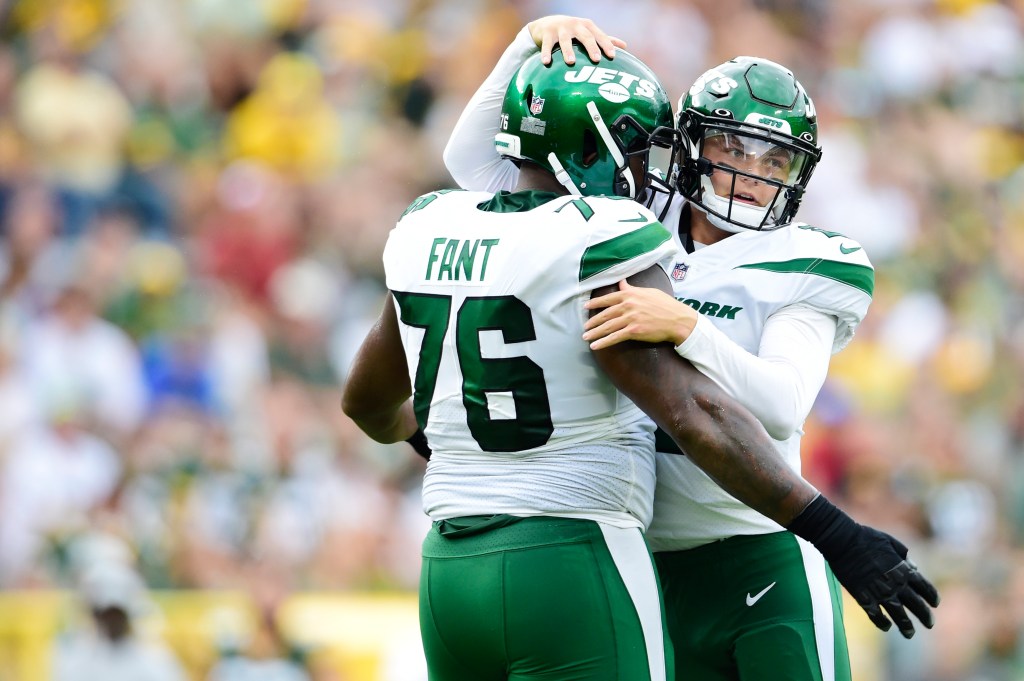 With 2 1/2 weeks to go before the season opener against the Panthers, the Jets have plenty of question marks, but who the starting quarterback will be is not one of them, and they deserve some kudos for how they have handled Wilson.

The Jets wisely chose to clear the path for Wilson after drafting him No. 2 overall. They did not sign a veteran quarterback to compete with him. There was no pretend competition with someone already on the roster. It has enabled Wilson to get every first-team rep since he reported to training camp, and it has led to a smooth summer for the 22-year-old and for the team as a whole.

Saleh’s counterparts in Chicago, San Francisco and even New England are facing inquisitions of varying degrees about their starting quarterbacks. It may seem unimportant, but quarterback controversies don’t just stay in press conferences. They bleed into personnel meetings, staff discussions and into locker rooms.

“What’s been good is we’re not having to deal with the locker room and the, ‘All right, I like this guy,’ you know what I’m saying? That’s been a good thing,” Saleh told The Post after his press conference on Wednesday. “Obviously, it’s our job as a coaching staff to do everything to put him in the best position, no different than if there was a veteran in place.”

In 2018, the Jets drafted Sam Darnold, and instead of just giving him the job, they created a training camp competition between him, Josh McCown and Teddy Bridgewater, even though everyone knew Darnold had a 99 percent chance of winning the job. Veterans on that team, though, were upset when Darnold was named the starter because they felt like Bridgewater was the best quarterback in camp. It would be overstating things to say that divided the locker room, but there certainly were players who questioned whether the organization was prioritizing Darnold’s development over winning.

Saleh has been faced with no such issues this year.

Wilson, by all accounts, has thrived with the starting offense, and has looked more and more comfortable as camp has gone on and in his first two preseason games.

“To Zach’s credit, the way he’s attacked his job and the way he’s approached, it has been phenomenal,” Saleh said. “I’ve talked about his process. A veteran isn’t going to help with his process. He’s already light years ahead of everyone how he prepares Monday through game day.”

It is fair to question whether the Jets made a mistake by not adding a veteran to backup Wilson in case he is injured, but it was the right call not bringing in one to “compete” with in training camp.

What is happening in Chicago drives that point home. The fan base wants rookie Justin Fields to play after watching him make highlight plays in the preseason. Bears coach Matt Nagy has said he is sticking with veteran Andy Dalton. The Bears signed Dalton this offseason and surely promised him he would start before they drafted Fields.

The Jets discussed adding a veteran quarterback but, frankly, did not love the options out there. The top level of available veterans all wanted to go somewhere to compete for the starting job, something the Jets would not offer. The next level of available veterans are retreads who are going to prevent you from being embarrassed but are unlikely to win you any games.

“The last thing you want to do is force something just for the sake of forcing something,” Saleh said. “Whether it’s helped him or not, we’ll soon find out.”

You may argue that Wilson would have benefitted from competition in camp, but remember that also would have cut into his reps with the starting offense, something that is more valuable. Wilson also does not act entitled, even though he has known he would start since the spring.

“I can’t have the mindset of, ‘I’m the guy, so I can be complacent,’” Wilson said. “I have to keep competing. I’ve got to earn my job, no matter who’s there.

“You’ve got to understand if you don’t do well, they’re going to replace you.”

Wilson has no reason to look over his shoulder right now, and that’s a good thing.