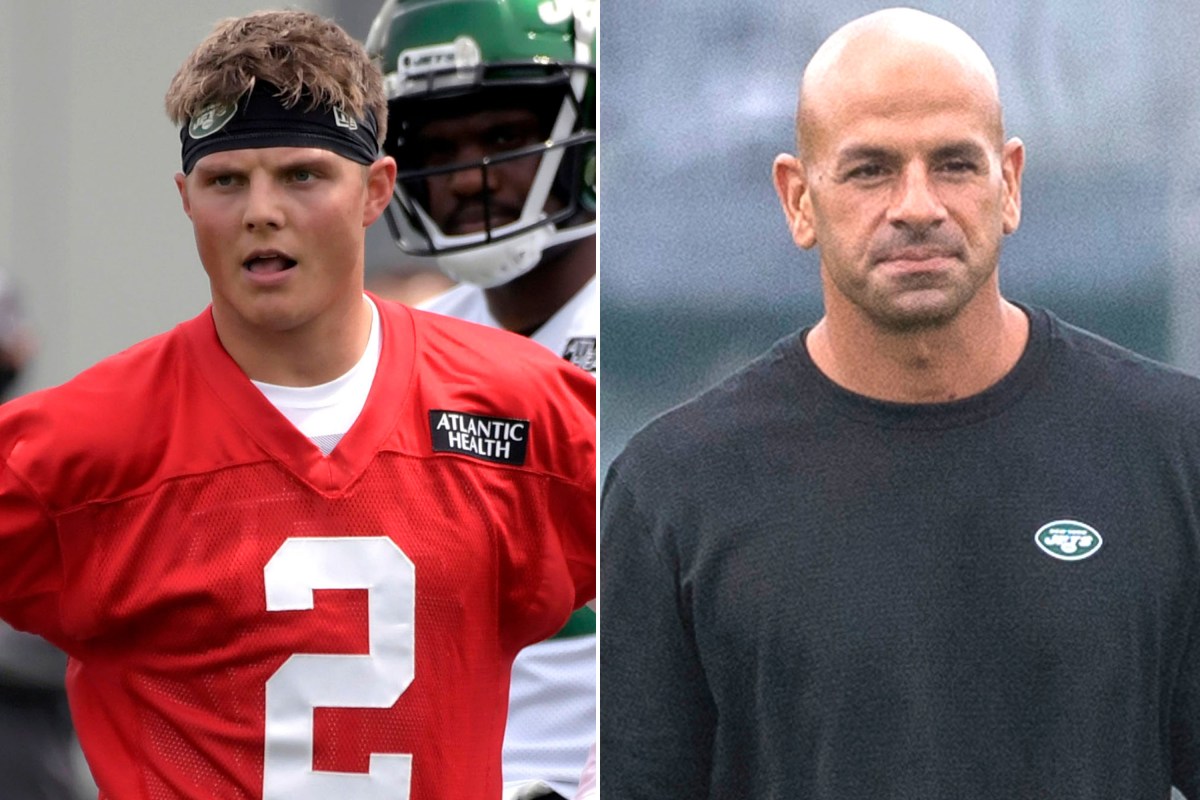 
SALEHLUJAH! The Jets recovered their Buttfumble.

Now on with the Zach Wilson Era.

The mindless standoff — ONLY THE JETS, SAME OLD JETS — ended on Thursday afternoon half an hour after Robert Saleh was forced to grin and bear it answering another round of “Where’s Zach?” questions.

ALL GAS NO BREAK for the rookie coach for two days.

Back to ALL GAS NO BRAKE getting the rookie franchise quarterback up to speed across the 18 remaining practices.

Saleh, of course, deserved better as one of the twin faces of the franchise forced as the front man to briefly twist in the wind, and thankfully for his sake the other face, the babyface that will be expected to fly the Jet with the rookie coach in the cockpit with him, is now ready for boarding.

GM Joe Douglas owed it to Saleh, his first coaching hire, to get the kid signed, and he and the kid’s agent owed it to the kid as well.

All Saleh has done since landing his NFL dream job is vaporize the vestiges of stench left behind by the Adam Gase Era by the force of his personality and oozing, infectious energy.

He couldn’t wait to start his ’til death do they part marriage to his rookie franchise quarterback … and when training camp began, he felt jilted at the altar.

Maybe he’s just an optimistic dude. Or maybe his trust in Douglas was such that he knew a compromise — Wilson (four years, $35.15 million, fully guaranteed) gets his $22.9 million signing bonus paid in the first 15 days, the Jets get their offsets — was imminent. Saleh had last spoken with Wilson earlier this week.

I asked him: “Would you be tempted, if this thing drags on, to call him up and …”

“And nudge him?” Saleh interrupted with a smile. “No. That’s for him, the agent, and Joe.”

Saleh never had to nudge.

“It’ll be good not to have to answer questions about him,” he said with a smile.

Now the questions about Wilson will be what they should have been from Day 1:

Wilson going to his third read on that touchdown pass to Corey Davis, what does that tell you about him?

That off-platform throw to Elijah Moore, does that remind you of Aaron Rodgers or Patrick Mahomes?

Good grief, Zach didn’t see ghosts on that interception, did he?

The idea is at one point, and no one should expect in the near future, Wilson and Saleh will be ready for liftoff.

As bad as the optics were, Saleh conducting practice with Mike White and James Morgan thanks to stubborn silliness over offsets and a deferred payment schedule that the Jets have a knack for turning into a rite of summer, Wilson missing two practices is a blip on the radar of a career that Saleh and Douglas are convinced will be exhilarating.

Perhaps Wilson missing two days, or one fewer than Sam Darnold, is a sign that the Jets are some making progress (the laugh track, please).

Saleh had been asked at what point he might become concerned about Wilson’s absence.

“Like I said, it’s more concern for the kid,” Saleh said. “Every rep is important so my concern is that it’s two days too many already … for him.”

Saleh’s offensive coordinator, Mike LaFleur, has been brainstorming installs with Wilson and is the perfect man for the job of developing him.

“This young man’s got a chance to do something special around here that hasn’t been done in a while,” Saleh said, “and every RTP matters for him.”

Ending the Jets’ 10-year playoff drought? Winning the franchise’s second Super Bowl hasn’t been done in a while … 53 years to be exact. But those are dreams for another day.

This was veteran quarterback Josh McCown during the Darnold holdout:

There was, and is, no substitute for Zach Wilson.

The Jets’ Quarterback of the Future is expected at practice on Friday.