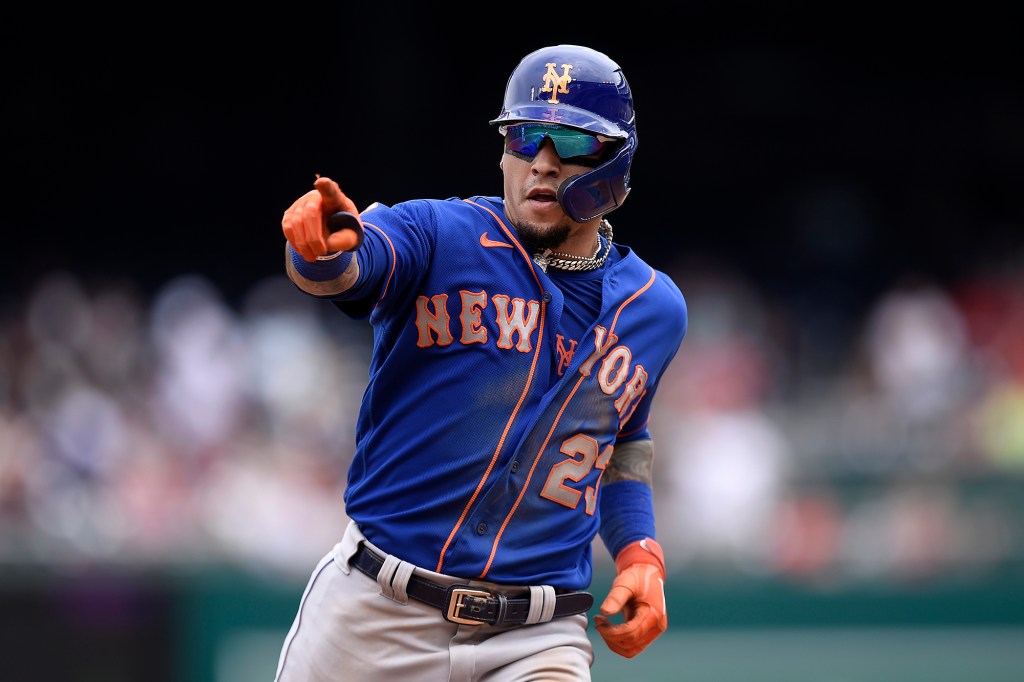 
WASHINGTON — Javier Baez until recent days was more known during his Mets tenure for a certain hand gesture than contributing to the lineup.

But over the last week, it’s been thumbs-up all around for the All-Star infielder. That included Sunday’s performance against the Nationals in which he was significant in four scoring rallies.

Baez went 4-for-4, reached base five times and drove in two runs, helping the Mets roll to a 13-6 victory at Nationals Park. The Mets won for the eighth time in nine games, guaranteeing they wouldn’t lose ground against the NL East-leading Braves, who played a later game in Colorado. The Mets began the day 3 ¹/₂ games behind in the race.

One week after creating a firestorm (he and Francisco Lindor apologized two days later) by saying the thumbs-down signal was to boo the fans at Citi Field, Baez had one of his biggest games with the Mets.

Patrick Mazeika’s sacrifice fly in the eighth brought in Baez — he had reached on a leadoff infield single — with the go-ahead run. The Mets piled on in the ninth, scoring six runs, which included a Kevin Pillar grand slam and Lindor solo blast. Baez and Jonathan Villar homered earlier in the game, on a day the Mets totaled 16 hits.

Taijuan Walker was knocked out in the fifth inning after allowing six earned runs on six hits with three walks and a wild pitch. The right-hander appeared to have rebounded after a tumultuous first inning in which he surrendered two homers, but then came the fifth.

In that inning, Juan Soto stroked a two-run single with the bases loaded to slice the Nationals’ deficit to one before Walker unleashed a wild pitch that allowed Alcides Escobar to score, tying it 6-6. Jeurys Familia prevented further damage by getting the final two outs in the inning, leaving the go-ahead run on second base.

It was a sixth start in nine since the All-Star break for Walker in which he allowed at least four earned runs. His ERA now stands at a season-high 4.15.

The Mets came out smoking against right-hander Josiah Gray, who allowed the first five batters he faced to reach base. Before the inning was complete the Mets had a 4-0 lead.

What do you think? Be the first to comment.

After Villar doubled leading off the game and Lindor walked, Pete Alonso singled to load the bases. Michael Conforto followed with a shot through the middle for a single that brought in two runs. After Baez singled in a run to extend the lead to 3-0, Jeff McNeil hit a sacrifice fly to complete the scoring in the inning.

Walker surrendered two homers in the first to erase much of the Mets’ lead. Lane Thomas went deep leading off the game for the Nationals before Escobar walked and Josh Bell delivered a two-run blast. Walker has now allowed 14 homers since the All-Star break after surrendering only six in the first half.

The Mets continued their assault against Gray in the second and third innings, with Villar and Baez each hitting a solo homer to extend the lead to 6-3. Villar’s homer was his seventh in his last 28 games. Baez’s blast was his sixth in 24 games since joining the Mets at the trade deadline.

Yankees’ weekend to forget ends with brutal loss to Orioles