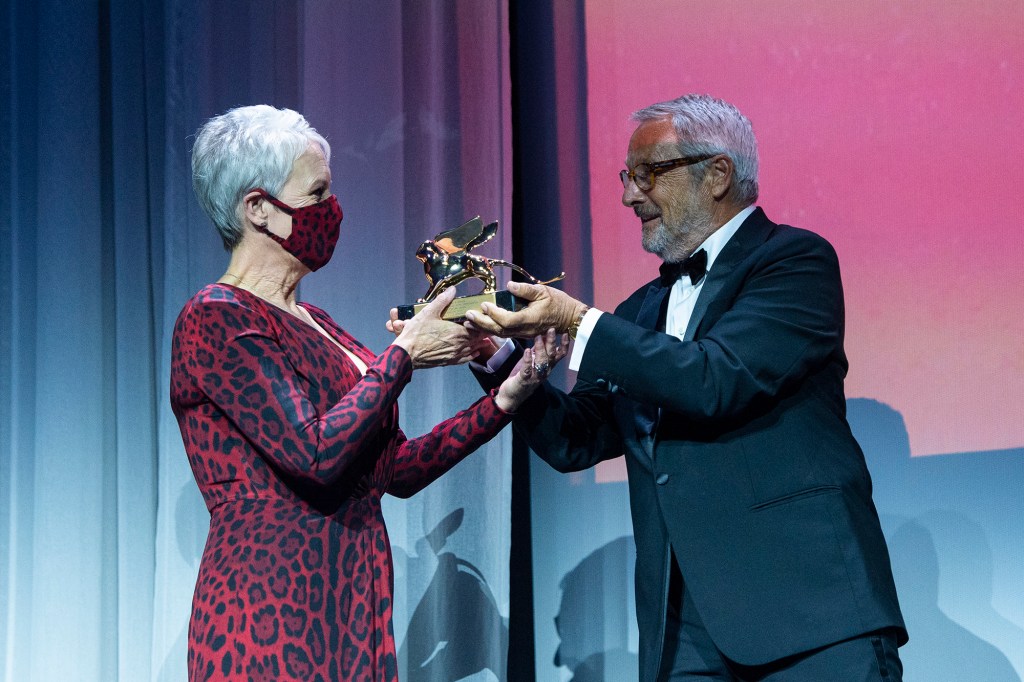 
A lion does not concern itself with the opinion of sheep and Jamie Lee Curtis was fine giving the sheep something to talk about.

Curtis stunned fans when she went up to receive the Golden Lion for Lifetime Achievement at the Venice International Film Festival Wednesday.

A fan caught the iconic horror film actress, 62, stripping off her shoes as she ran onstage to accept the prestigious honor.

Talking about the memorable moment on social media after the ceremony, the “Halloween Kills” star wrote, “I accepted my Golden Lion Lifetime Achievement with these words which I attempted to deliver in Italian.
‘Thank you again for this great honor. I dedicate it to the victims and survivors of violence. All types. Physical. Political. Spiritual. Sexual. Psychological. Cultural. Emotional, Domestic, and the violence and hatred of discrimination against ANY and ALL who dare to have their own ideas and minds. I proudly accept this tonight with a clear, sober mind of my own and with an open and incredibly grateful heart.’ “

The daughter of Tony Curtis and Janet Leigh’s newest film in the “Halloween” franchise had its world premiere Wednesday in Venice. Universal announced the flick will have a day-and-date release in theaters and on Peacock on Oct. 15 — just in time for spooky season.

Curtis returns from the original 1978 film and its many sequels as Laurie Strode, Michael’s main obsession who he tries to attack and kill over and over again.

While the reviews for the scary movie have been mixed, fans are sure to feel some sort of nostalgia watching Curtis back on the big screen again.

The Hollywood Reporter’s David Rooney described the film as having “barely developed characters to hunt down Michael” and cheekily referred to it as “Halloween Overkills.”

Owen Gleiberman from Variety wrote, ” ‘Halloween Kills’ is no masterpiece. It’s a mess — a slasher movie that‘s almost never scary … with too many parallel plot strands that don’t go anywhere.”

Brian Hallisay Net Worth: How Rich Is He Actually in 2021?