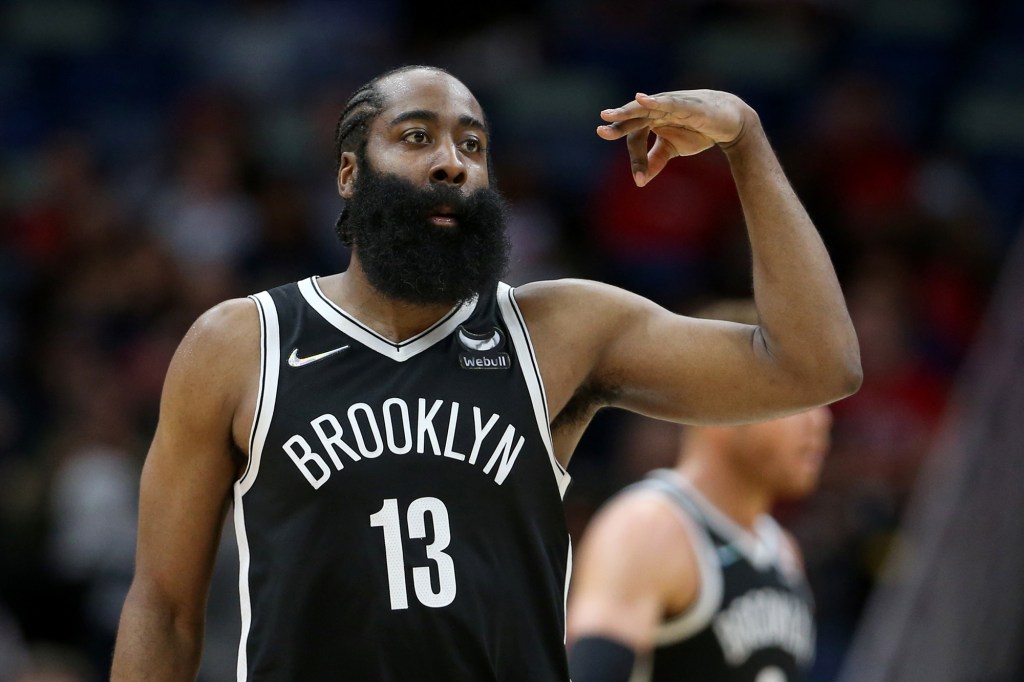 
OKLAHOMA CITY — So far this season, Kevin Durant has looked like an MVP and Kyrie Irving has been a DNP. But it’s James Harden’s return to form that has powered the Nets’ rapid improvement.

Harden has been shaking off the rust of a summer spent in injury rehab rather than playing pickup. He may not quite be his old scoring-champion self, but as his Nets prepared to face the Thunder on Sunday, he has been growing closer by the day.

“I’m getting there. It wasn’t going to take long,” Harden said. “I mean, this is the highest [level] in the sport is the NBA, the most talented players in this world. So it’s not going to be easy for me to just come out there and do what I do. It takes a lot of hard work to be playing at a point to which you guys have seen me play at.

“When I’m not scoring 30 points, when I’m averaging 18-some points, it’s like ‘What’s wrong with James?’ It’s pretty solid still. I’ve been playing so well and so extremely at another level to where you guys set standards for me; and I set standards for myself as well. For me, I just continue to work. I feel a lot better, and the work don’t stop.”

In the season’s early stages, 18-some points would’ve been an improvement.

Harden averaged 16.6 points, eight assists and seven boards through the Nets’ first five games, shooting .359 overall and .333 from 3-point range for a team-worst minus-8.4. It’s no wonder the Nets struggled out of the gate, going just 2-3.

But since then? Harden comes into Sunday averaging 21.8 points, 9.6 dimes and 8.3 boards in his last eight games. His shooting has spiked to .481 and .467 for a plus-7.9. All three of Harden’s triple-doubles came during this stretch, and it’s no coincidence the Nets surged to 7-1 during his resurgence.

Harden had season-highs in scoring (39), assists (12) and 3-pointers (six) on Friday to lift the Nets to a victory in New Orleans.

“He was aggressive all night. He was getting downhill, getting to the free-throw line, 11-for-18, highly, highly efficient, 12 assists. He just looked incredible,” Durant said. “James did a great job controlling the game.”

Durant and Harden combined for 67 points against the Pelicans, their second-highest total as Nets teammates. They’re simultaneously in red-hot form coming into Sunday’s game, the first time they’ve played together at Oklahoma City since they were Thunder teammates in 2011-12.

Asked what defenses are supposed to do when both he and Durant are in that kind of form, Harden quipped “Umm, pray?”

Harden is getting it going after dealing not only with the NBA’s rule changes to stop players from drawing fouls with unnatural motions (the so-called Harden Rule), but also with the time lost while rehabbing from the Grade 2 hamstring strain he suffered late last season.

“We’ve got to be patient with him. It’s still I think got some yards to go before he feels this way every night or feels at his best,” coach Steve Nash said. “There’s the fitness, there’s the rhythm, and then there’s the confidence: For all those three things to come back, it does take time.

“He was great [Friday]. He’s been really good the last week or so, and trending in the right direction. But I don’t want to get too carried away; let’s give him time to get his game back.”

Why Knicks are off to slow start at MSG

Jets vs. Bills odds, analysis and predictions for all Week 10 NFL games