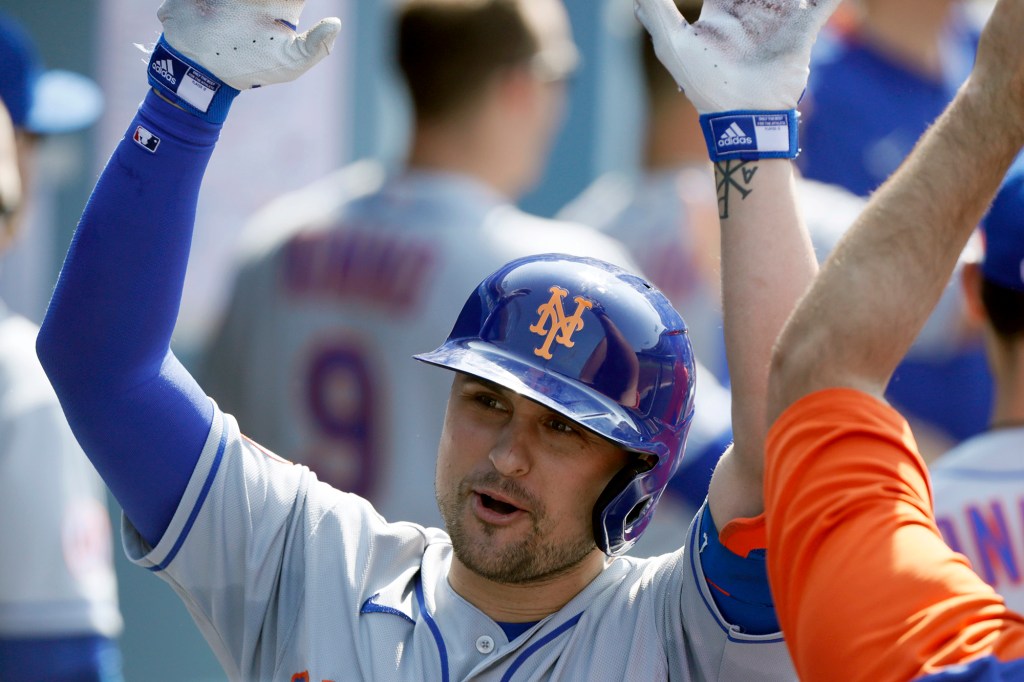 
There is about to be a playing-time squeeze for the Mets. But it appears that J.D. Davis won’t be the one finding himself on the bench.

His best offensive performance in weeks on Sunday couldn’t have hurt his case.

The Mets’ third baseman drove in four runs and homered for the first time in over a month, as the Mets avoided a four-game sweep in Los Angeles with a 7-2 victory over the Dodgers.

With Javier Baez returning to the lineup on Sunday and Francisco Lindor expected back at some point early in the week, manager Luis Rojas has some decisions to make. Baez is going to be playing second base, and Rojas suggested that will move Jeff McNeil into different spots. It doesn’t appear that McNeil will push Davis to the bench, though.

“It’s not going to be set in stone, but as you guys saw, McNeil played left field today. He’s going to spend some time in left field,” the Mets’ manager said, noting that a split in that spot between McNeil and Dominic Smith is one possibility. “J.D. at third has done a good job defensively. He’s come a long way, so we want to keep him there, where he’s doing really good, and include his bat in the middle of the lineup.”

The Mets obviously need offense, and Davis at least showed his potential in the finale of the road trip after failing to deliver in bases-loaded situations the previous two days.

Davis stroked an opposite-field, run-scoring single in the Mets’ three-run first inning and added a key two-run shot in the seventh, his first homer since July 17. He also drew a bases-loaded walk in the ninth after falling behind 0-2. The four RBIs were two fewer than he had amassed all month. He has been getting his hits, but not driving the ball. Some of that could be attributed to injury issues with his left hand.

Davis tore two ligaments in the hand (including one off the bone) on a swing in late April and didn’t return until mid-July. Davis told The Post’s Mike Puma in early August that doctors have said the hand is 90-95 percent, and there will be inflammation that could inhibit his swing. He has struggled catching up to elevated fastballs, although he turned around a 95 mph Phil Bickford heater for his homer.

“He was closer to the ground, it was like he wasn’t as high [with his swing] and he just got the barrel to the ball,” Rojas said. “It’s good to see the adjustment.”

Davis’ big day came at an important time for the flatlining Mets, who are in desperation mode after falling seven games behind the streaking Braves in the NL East. It was also imperative for Davis to produce if he wants to stay in the lineup.

Classes starting, but international students failing to get US visas – World News