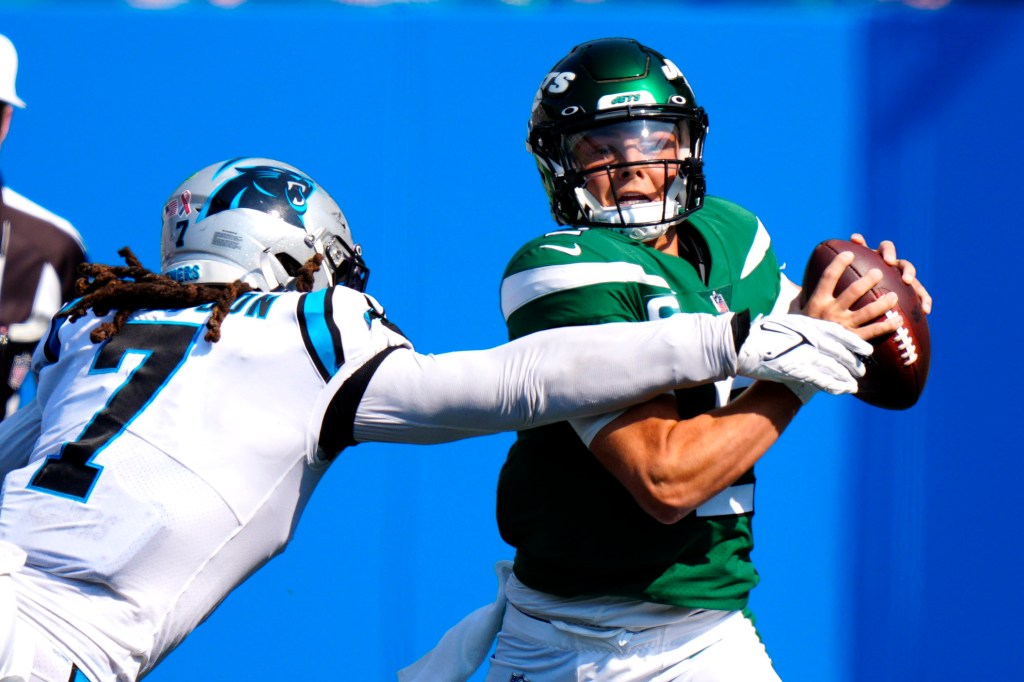 
CHARLOTTE, N.C. – The Jets opened the season with a 19-14 loss to the Panthers on Sunday. Here are some thoughts and observations from the game:

1. The Jets pass protection had to look familiar to Sam Darnold standing on the other sideline on Sunday. It was the same old story for the offensive line. They struggled against blitzes and stunts. They looked out of sync with each other. They gave up way to many free runners to the quarterback. All of it led to Zach Wilson getting sacked six times and hit four more times. If not for Wilson’s quick feet, it would have been nine or 10 sacks.

There are plenty of places to assign blame for this failure. But it starts with general manager Joe Douglas. When he was hired in June 2019, he set out as his top priority winning at the line of scrimmage. The Jets are still getting pushed around at the line of scrimmage. Douglas has had a long honeymoon here. He came in late in 2019, so he did not get any blame that season. Adam Gase and Sam Darnold took every bullet for 2020. And former GM Mike Maccagnan’s fingerprints were still all over the roster in those years and his mistakes became more and more evident.

But that is over. Gase is on a golf course. Darnold is a Panther. And the statute of limitations on blaming Maccagnan has run out. Douglas has had two drafts and two free-agent periods to address this roster, in particular the offensive line. No one is saying he should have built a Super Bowl contender in that time, but shouldn’t the offensive line look better? He’s used two first-round picks on the line and signed numerous free agents, including the starting center, right guard and right tackle on Sunday. Simply put, this is Douglas’ handiwork. Right now, it does not look good. It is too soon to judge rookie Alijah Vera-Tucker, but he had a rough debut, allowing six pressures, according to PFF. Last year’s first-round pick Mekhi Becton had a shaky training camp and had a few rough moments Sunday before suffering a knee injury. When it comes to Connor McGovern, Greg Van Roten and George Fant, ask yourself this: Do you want these guys to be starters in 2022? Probably not. That is all you need to know. And Douglas signed Morgan Moses in June, which looked like a good move, but Moses could not even beat out Fant in camp.

Douglas’ failures on the offensive line were the story on Sunday and figure to be in other games this season. Protecting Wilson needs to be paramount. The Jets looked incapable of it Sunday. That needs to get fixed … quick.

2. With all the focus on how bad the pass protection was, it got lost a bit on Sunday how bad the Jets were at running the ball. All offseason we have heard about the Shanahan offense that Mike LaFleur would be using and how it is predicated on the run. On Sunday, the Jets averaged just 2.6 yards per rushing play. That is not going to get it done. It is hard to fault the backs. They were getting hit as soon as they touched the ball.  According to PFF, the Jets averaged 0.2 yards before contact per rush. The Jets used the committee approach at running back with Ty Johnson, Tevin Coleman and Michael Carter. The longest run of the day was 12 yards by Johnson.

3. Robert Saleh had his first major in-game decision in the second quarter, facing a fourth-and-1 at the Panthers 42. It looked initially like Saleh was going to punt it. But he took a timeout and then sent the offense back onto the field.

I loved Saleh’s decision to go for it here. The Jets were down 3-0 at the time and needed to gain some momentum.

What I did not love was the play call. LaFleur handed the ball off to Tevin Coleman on a slow-developing play and Coleman was blown up in the backfield. The Panthers got the ball back and Darnold threw a 57-yard touchdown pass to Robby Anderson on the next play.

I can’t understand why coaches don’t have more imagination on fourth-and-short. The NFL is all about the short passing game now. Surely, LaFleur had a better play on his call sheet than that. Get Wilson on the move and allow him to have a run/pass option on that play. Hit the tight end. Anything but a slow-developing run play.

4. The Denzel Mims situation is downright odd. Mims played only three snaps on Sunday. He caught the one pass that was thrown to him for 40 yards. So, why isn’t he playing more? It makes no sense.

Clearly LaFleur — and maybe wide receivers coach Miles Austin — don’t trust him. That was obvious in training camp when Mims was running with the third team. It feels like Mims may be a square peg trying to fit into a round hole with the new coaching staff.

Even if the Jets coaches do not have full faith in Mims or feel like he is not the best route runner, Sunday was the day to let him play. Jamison Crowder and Keelan Cole were both out. For all of Mims’ faults, there is no denying is ability. You can’t tell me Braxton Berrios or Jeff Smith are more talented than Mims. The Jets offense did nothing for two-and-a-half quarters. Don’t you think a big, talented receiver on the field might help? Instead, the Jets did not put him into the game until there was three minutes left and lo and behold, he made a big play.

Coaches have favorites and guys they don’t like. But LaFleur needs to give Mims more of a chance. The guy has skills that the Jets offense needs.

The Jets allowed six sacks in the game. It was the fifth time they allowed at least six sacks in a game since 2019. It had only happened five times between 2010-18. That shows how much the offensive line has fallen off the cliff.

Ty Johnson led all running backs with 35 snaps (54 percent). Tevin Coleman had 17 and Michael Carter had 16. I did not expect Johnson to be the lead back.

Kicker Matt Ammendola did not attempt a field goal, but came in as the emergency punter after Braden Mann injured his left knee in the first quarter. Ammendola had a 65-yard punt and pinned the Panthers inside the 20 twice.