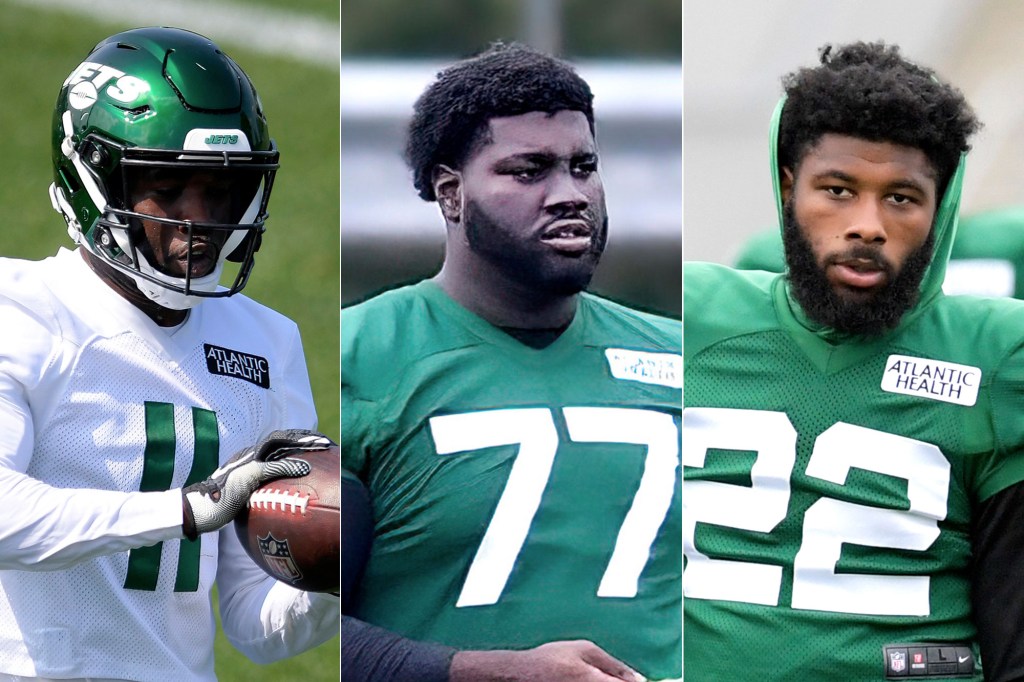 Mekhi Becton posted a photo of his massive right leg on Tuesday all bandaged up after he underwent knee surgery.

It was a fitting image for the Jets 2020 draft class, the one that Becton was at the top of. That class at the moment is beaten up, limping around and hoping for a speedy recovery.

In Sunday’s loss to the Patriots, only one of the nine players the Jets drafted in 2020 was on the field. Fifth-round pick Bryce Hall started at cornerback. The rest of his classmates were spectators. Four of the Jets from that class are currently on injured reserve. Two have been cut. And two were inactive for the game.

It is not a good look for general manager Joe Douglas. This was his first draft class, and while it is too soon to panic, concern is warranted. Injuries are something you can’t control, but this class has had an alarming number of injuries and has struggled to stay on the field.

The 2021 Jets class has shown a lot of promise early on. The Jets are playing more rookies than any other team with eight starters. But the idea is to stack good draft classes on top of each other, and if the 2021 class does pan out, the Jets still will be lagging behind if the 2020 class becomes another lost class like so many of their recent drafts.

Becton looked like a stud as a rookie when he was on the field, but the left tackle had frequent injuries. He suffered another injury this spring and then had a poor training camp, one that led to him being called out by offensive coordinator Mike LaFleur. In Week 1, Becton injured his knee, and surgery will keep him out a minimum of four-to-eight weeks. This likely will just be a road bump on the way to a strong career for Becton, who is very talented, but the old saying is the most important ability is availability and he has missed a lot of time.

The biggest mystery has been second-round pick Denzel Mims. The 6-foot-3 wide receiver from Baylor was slowed by hamstring injuries as a rookie but showed promise in nine games with 23 catches for 357 yards. He has not clicked with the new coaching staff, though, and is currently buried on the depth chart. He played just three snaps in Week 1 and was inactive last week. It is hard to see how he will find his way onto the field anytime soon.

The Jets took two players in the third round — safety Ashtyn Davis and defensive end Jabari Zuniga — and neither has had much impact. Davis is on IR, still recovering from a Lisfranc foot injury that ended his rookie season. He is eligible to come off IR before the Oct. 3 game against the Titans. Zuniga was cut by the Jets at the end of training camp but was signed to the practice squad.

The fourth-rounders were running back La’Mical Perine, quarterback James Morgan and offensive lineman Cameron Clark. Perine was another player who showed some promise as a rookie (64 rushes, 232 yards, two touchdowns) and had a strong training camp but has been inactive for the first two games. The Jets have Michael Carter, Tevin Coleman and Ty Johnson at running back, so it is hard to see Perine getting on the field unless there is an injury. Morgan was cut and is now on the Panthers practice squad. Clark suffered a scary season-ending spinal injury in training camp.

The final two players picked have been contributors. Fifth-round pick Hall is a starting cornerback and has been fine. Punter Braden Mann, taken in the sixth round, was decent as a rookie but is now on IR with a knee injury and won’t be back for several weeks.

Draft-class evaluations can change drastically over time. This class might find its footing and end up giving the Jets some cornerstones for the next decade.

Right now, though, this group is hurting.