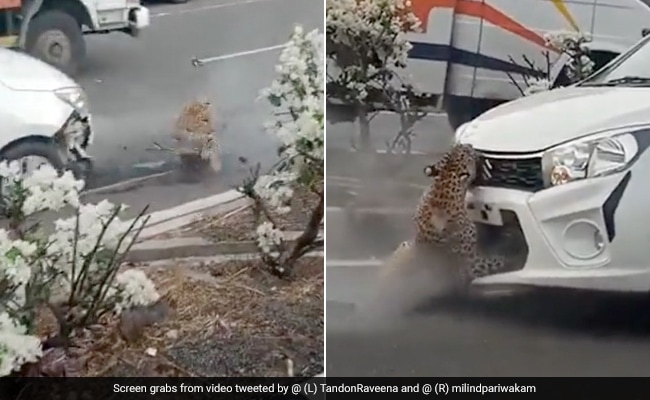 The leopard jumped above the walls and ran away after breaking free from under the car.

Videos of a gruesome incident have been making their rounds on social media where a leopard has been hit by a car on a highway. The incident reportedly took place on Chandanpuri ghat on the Pune-Nashik highway (NH50) in Maharashtra. After being hit by a Maruti Suzuki Celerio, the leopard was stuck under the front end of the car, and was caught between the broken front bumper and the pavement.

Prayers for this beautiful leopard… hope he survives,even though he’s badly wounded , he escapes into the jungle . @WildLense_India I hope our politicians wake to the fact that linear development can happen hand in hand with well thought of conservation methods. pic.twitter.com/KbdhgRoaZS

The leopard soon broke free once the hatchback reversed, and ran for its life jumping over the walls of the highway and into the forest. The leopard was badly bruised and visibly injured from the accident. Multiple celebrities tweeted this video too, asking the Minister of Road Transport and Highways Nitin Gadkari to take action to avoid such incidents which put the wildlife as well as the citizens in danger.

This is what we are doing to our wildlife. It’s a simple case of bad planning. More importantly we are building unsafe roads for citizens. @OfficeOfNG @MORTHIndia @MORTHRoadSafety @nitin_gadkari @RoadkillsIndia

Efforts to find and treat the injured leopard are reportedly being taken, however with many stretches of roads going through dense forests, a similar incident is bound to take place again sooner or later if precautionary actions aren’t taken.