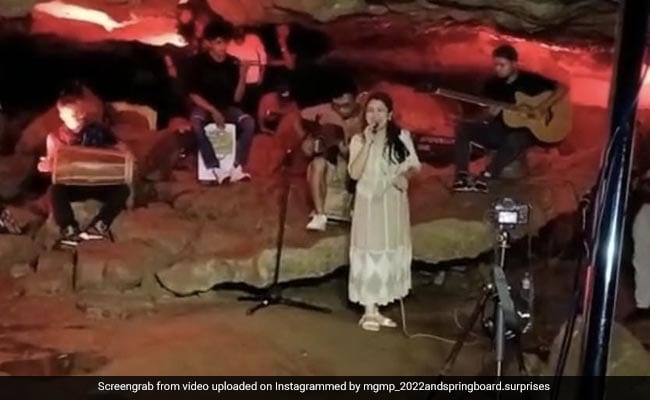 The famous Arwah Cave at Sohra, Meghalaya, on July 16, turned into the venue for a music show that was a first of its kind. With it, India has witnessed what is presumably its maiden musical show inside a natural cave. With the intention to promote tourism, the concert featured local music talent showcasing their skills.

Perched on the natural rock formations within the cave, musicians played percussion and string instruments with vocalists belting out songs, both old and new.

The Grassroots Musical Projects event titled “KI Sur Na Pubon”, which translates to “message from the cave”, was organised inside the natural cave in the East Khasi Hills district of Meghalaya.

The endeavour combines the opportunity of the local talent to find a wider audience with the entertainment of the tourists who throng the picturesque state.

Speaking about the idea behind the concert, Clean Sohra Campaign leader Alan West Kharkongor said that the event also intends to spread a message regarding the conservation of nature. “The idea of conducting such a unique event is to tell the world how important it is to take responsibility to protect and preserve mother nature, whether it is the cave, the streams, the waterfalls and so on. This calls for a celebration of the scenic beauty that the Sohra area is blessed with, adding that folk music serves as a great medium to spread the message.

Kit Shangpliang of Summersalt, the folk-fusion band that performed at the event said that it was a great opportunity to promote young talent. “It gave us so much purpose to be able to jam and play the songs of the young musicians. We were there to do our part and encourage the upcoming artists who performed soulfully,” Kit said, about interacting with the budding performers at the show.

Sohra in Meghalaya is home to several scenic natural assets. From waterfalls to hidden caves, Sohra hosts varied topographical elements. The area is best known for the site of the world’s only living bridge the “Living Root Bridge”, which attracts tourists from around the world.