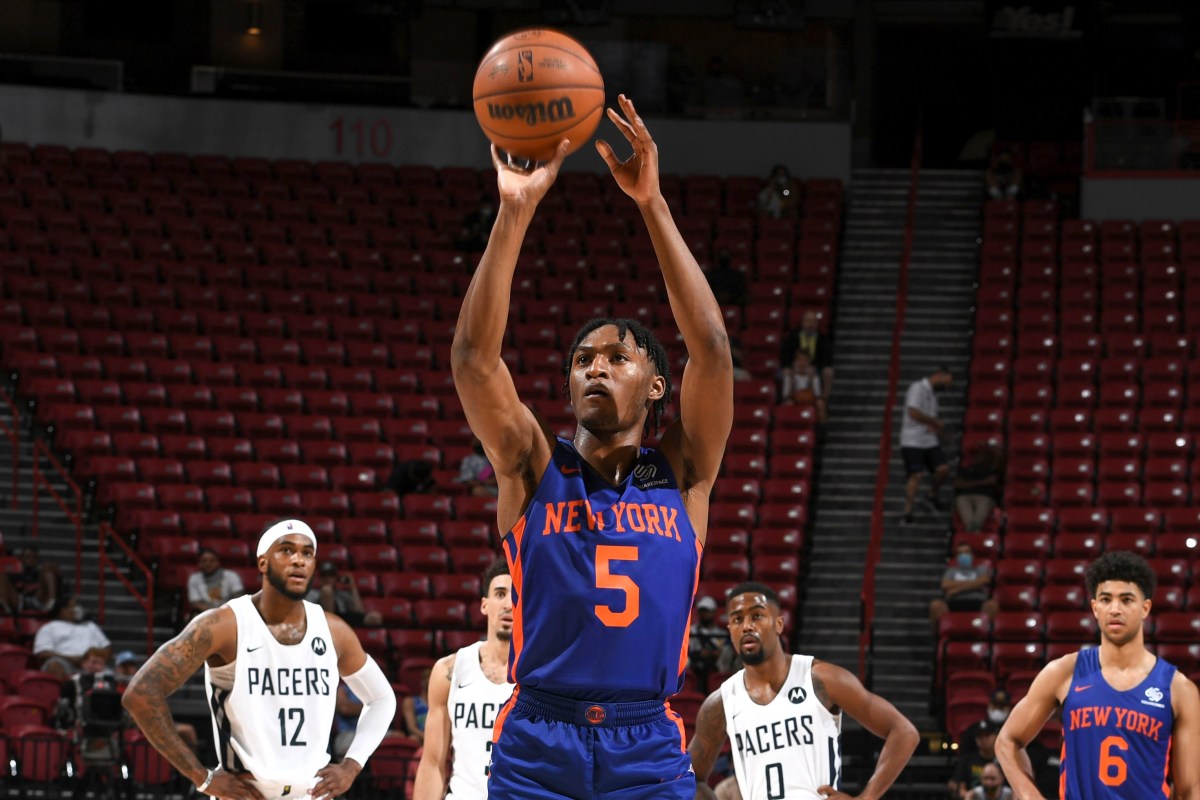 LAS VEGAS — Don’t tell Immanuel Quickley he’s not a point guard. On Monday, he took steps toward proving it.

After a brutal shooting performance in Sunday’s summer league opener, Quickley responded with a golden performance, scoring 32 points with eight assists, only one turnover and one steal as the Knicks beat the Pacers, 94-86, at UNLV’s Thomas & Mack Center.

Quickley started at point guard for a second straight game and looked completely different than in Sunday’s opener when he shot 5 of 17 overall (2-of-11 from 3).

The second-team all-rookie selection out of Kentucky drilled 4 of 12 3-pointers and finished 11 of 21 overall Monday. Obi Toppin, the 2020 first-round pick, scored 22 points in a productive performance. Because of the pandemic, neither Quickley nor Toppin had the benefit of summer league last season after being drafted in November.

Quickley looked a lot more sure of himself in running the offense Monday — even getting into the paint, something he didn’t do Sunday.

“I feel like I’m always sure of myself,’’ Quickley said. “I made a lot more shots that helped a little bit. Just continue to just lead. Helping the guys. I’ve been around a year. I’ve been in playoff games. Just continuing to spread my knowledge to the new guys, the young guys. Obi and I are doing a great job understanding we have to help these guys and communicate.’’

Last season, Quickley excelled mostly as an off guard and became a fan favorite. But this experiment with Quickley at the point is intriguing, to say the least. The Knicks drafted a point guard in Miles McBride (14 points Monday), re-signed Derrick Rose and agreed to terms with former All-Star Kemba Walker.

“Whatever the team needs from me that’s what I’ll do,’’ Quickley said. “I have the ability to do both, I feel like. If I’m asked to play point guard, I’ll play point guard. If I’m asked to play shooting guard, I’ll play shooting guard. I just have the ability to be a basketball player. That’s a term people forget. People who can go out and pass, dribble shoot and defend. I try not to make the game too hard.’’

During this offseason, Quickley, 22, said he’s working on a midrange game to go along with his patented floater and 3-point marksmanship. Teams started to adjust to Quickley’s float game late in the season so he’s trying to be more diverse.

“Coach JB [assistant Johnny Bryant] was on me today — ‘You shot the floater’,’’ Quickley said. “I had a pull-up opportunity I didn’t take. That’s a lot what I’ve been working on. The midrange game.’’

Last month, Quickley received a big honor in being selected to the U.S. Select Team to scrimmage for a week versus the U.S. Olympic Team. But midweek he was bounced by COVID-19 health and safety protocols, though he didn’t test positive.

“Real tough, especially after getting two days in and playing really good,’’ Quickley said. “It was great being in an environment with great players like that. It’s definitely unfortunate I had to leave early. It was tough.’’

During the heat of the summer league battle, Quickley and Indiana’s Chris Duarte, whom the Knicks had targeted in last month’s draft, exchanged words on a couple of possessions.

“It was great,’’ Quickley said. “We were both competing, talking a little trash. We both enjoyed it. I just seen him now, we exchanged words, like great game. That’s what you want, competing against guys who will make you better. He’s a great player and had a great game.’’

“It’s stuff you do when playing — he says something to me and I say something back,’’ said Duarte, who finished with 14 points.