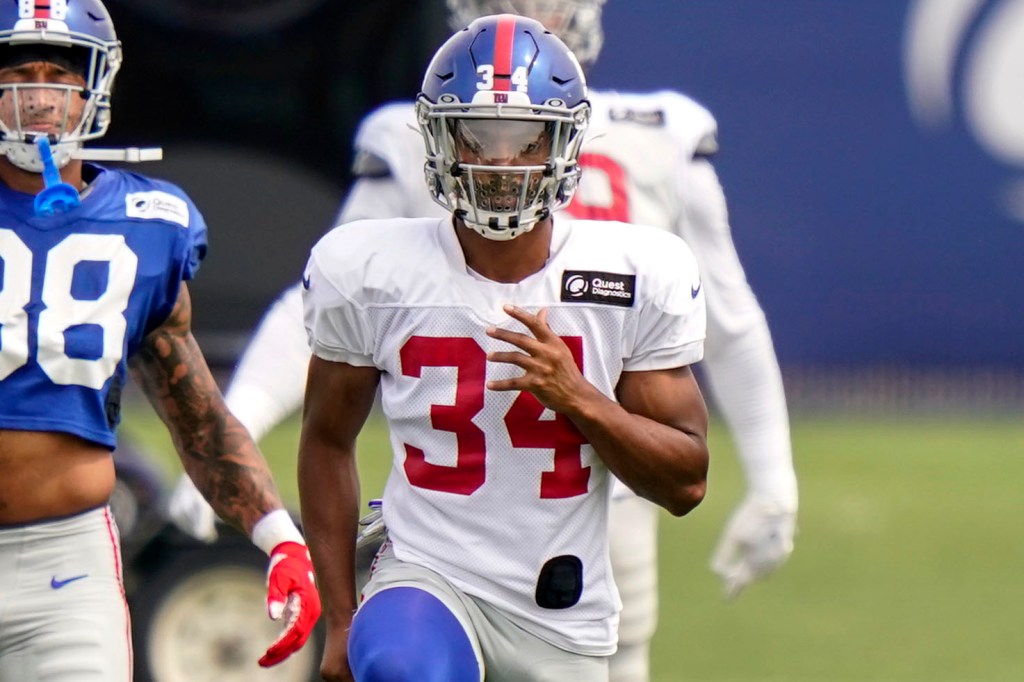 
There were days, moments and certain signs that suggested Sam Beal would not still be here. There were indications that the 25-year-old cornerback was destined to move on, unable to extend what has been an uneventful stay with the Giants.

There were 27 spots cleared by the Giants on Tuesday — by far the most lethal purge of the summer — and no news was the best news for Beal.  His name was on the initial 53-man roster, meaning he was allowed to hit the practice field that afternoon and begin thinking of his place on the team for this season.

He is sure he can help.

“No doubt,’’ Beal told The Post.  “I bring my mental part, my physical part, my speed part. In this league, it’s a passing league. I feel I can run with anybody on the field, anybody you put in front of me I can run with. That’s just my cockiness. I just love to play football. You got a guy who loves to play football who can run around like me, hey, I fit the spot, I fit the location.’’

It will be quite an achievement if Beal makes it through the next few days of roster manipulation.  Whatever luster he showed as a 2018 third-round pick in the supplemental draft had dulled as he faced an uphill battle to stay around. The Giants signed Adoree’ Jackson in free agency and selected two cornerbacks, Aaron Robinson (third round) and Rodarius Williams (sixth round), in the 2021 NFL Draft. They had Isaac Yiadom, a returning starter, back and then traded him for another cornerback, Josh Jackson of the Packers. Darnay Holmes was back for his second season.

Beal? He had been with the Giants for the past three years, with almost nothing to show for his time. He missed his entire rookie season on injured reserve with a shoulder issue. He began his second year on injured reserve with a strained hamstring and ended up playing in six games, with three starts, not doing much to make an impression. He opted out of the 2020 season and admitted part of that decision was based on his June arrest on gun charges in Ohio, which led to a guilty plea and probation through June 2022.

All this did not add up to career longevity for Beal with the Giants.

“In my situation I didn’t want to come in and try to maintain, at all,’’ Beal said. “I wanted to be the best of my ability and healthy as I can, as fast as I can be, show these guys I can move with any of these guys on the field, I can run around with anybody on the field, show the I can physical.’’

The Giants did not jettison Beal after the arrest, deeming this incident to not be on par with the serious allegations against cornerback DeAndre Baker, a 2019 first-round pick. Baker was released last summer and all charges against him, including four counts of robbery with a firearm, were later dropped. He made the Chiefs roster this week.

“A lot of coaches and players actually had my back in that situation,’’ Beal said. “Let me know where to set my focus. Anything that happened in the past stays in the past. I’m here to be a football player and be a part of this team.’’

Beal stayed healthy but often struggled in training camp. The coaching staff tried to get him to be more aggressive with his coverage. He helped his cause in the preseason games.

“He’s a guy that’s quietly improved for us,’’ coach Joe Judge said. “He’s a guy that hasn’t played a lot of ball in the last few years, but he’s gotten better for us day by day and then he’s been able to be competitive in some of the joint practices we’ve had.

“We’re pleased with the progress he made. That was obviously a very competitive position for us this training camp. He’s a guy that obviously did enough for us that, at this point, he’s factored in.’’

If “at this point’’ turns into an extended stay, Beal will have beaten the odds stacked against him.