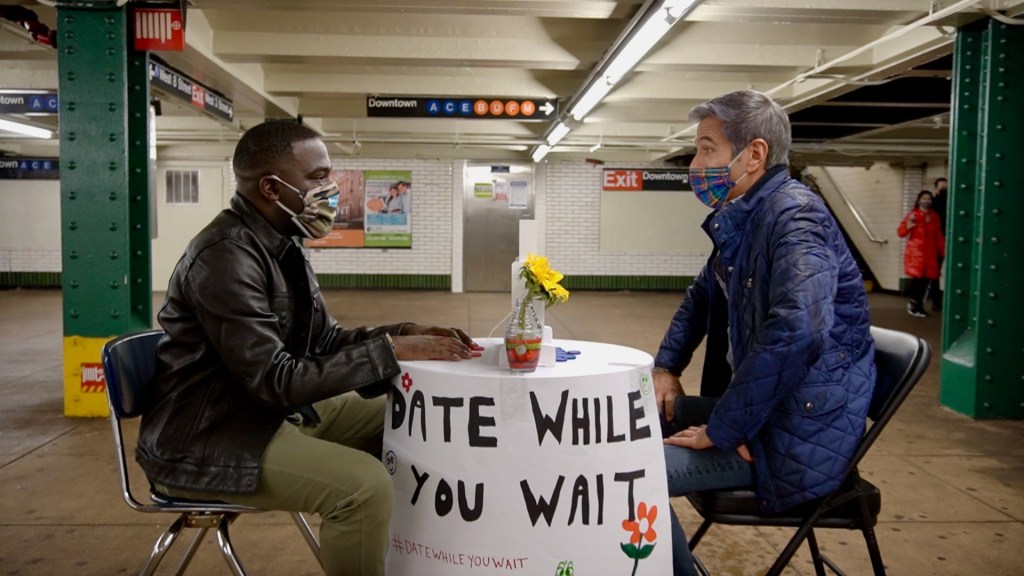 
In the era of social distancing, “Date While You Wait” creator Thomas Knox got up close and personal with New Yorkers in the subway.

Knox’s invitation to sit with them for a friendly chat while they waited for their train on the platform proved so successful, the stunt eventually became a TV show filmed during the pandemic. It has now earned him a local 2021 Emmy Award nod.

“I was shocked by how many meaningful conversations I had,” Knox, 34, told The Post. “I’m just someone who wants people to feel heard and understood.”

After a friend canceled their dinner plans owing to her chaotic commute in 2015, Knox thought to himself, “Nothing positive ever happens in the subway. I want to change that.”

So the East Flatbush native carted a table, two chairs and a glass Coke bottle filled with flowers onto the Union Square station platform for his first-ever “Date While You Wait” social experiment.

“When I first came up with the idea, I didn’t know if people would be interested in sitting to chat with a complete stranger while waiting for their trains,” said Knox, noting that he doesn’t have any professional therapy training.

“And even though ‘Date’ is in the title, it’s not about making romantic connections,” he insisted. Although some of the women he’s met underground have expressed interest in taking their connection to the next level, the single conversationalist has never pursued any would-be subway sweethearts. “I just wanted to create something that would bring a little positivity to commuting.”

On his first day of subway socializing, he conversed with 20 riders. Over the next few weeks, Knox found himself spending more than five hours speaking with random passersby every day.

He eventually began incorporating board games such as Connect 4 and Rock ’Em Sock ’Em Robots into his subway setup, which enticed more people to join him for a fun rush-hour respite.

And through “Date While You Wait,” he’s met CEOs, ex-convicts, teachers and tourists. He created Facebook and Instagram accounts in order to stay connected to his newfound friends.

“One man was visiting Manhattan to meet a partner he’d met online for the first time. He was in the train station headed to the airport because their connection wasn’t the same in person,” Knox recalled. “But after I encouraged him to give it another try, they ended up working things out.”

Now, Knox — who quit his job as an Apple sales representative in order to focus on “Date While You Wait” full time —  is taking his cordial conversations with commuters to television and streaming apps.

“This is something special that needs to be shared with the masses,” said “Date While You Wait” executive producer David Katz.

So, in February 2020, he arranged for a production crew to begin filming Knox’s experiment as a TV series.

And when COVID-19 erupted the following month, Katz and Knox were not deterred.

“We shot the whole series in the middle of the pandemic,” said Katz, emphasizing that they followed all the New York health guidelines to the letter. “No one got COVID.”

Subway artist Sarah Nisbett happened onto their subway set in “the thick of the pandemic” in October.

“We bonded over the different ways we connect with strangers in the subway,” added the Brooklyn-based sketch artist, who has been drawing portraits of passengers for the past nine years. “We both use this unremarkable place to create remarkable moments with others.”

The first season of “Date While You Wait” is streamable on the Fawesome.TV app. It’s also set to premiere on the NYC Life channel (WNYE-TV) on Oct. 13 at 8 p.m.

Meanwhile, the series has been nominated for a New York Emmy in the Interview/Discussion: Long Form Content category, with winners to be announced this fall.

“From being a random guy talking to people in the subway to being an Emmy nominee is amazing,” Knox said.

Still, he said that the friendly encouragement he has given Big Apple adventurers has been just as gratifying.

“This experience has been incredibly rewarding for me,” he said. “I get hundreds of messages from people saying they’ve started new careers, left toxic relationships and launched businesses all based on our conversation.”

“I’m glad to be changing lives one subway conversation at a time,” Knox said.

As Broadway nervously returns, London is having a ball