How Mets and Yankees stack up heading into crucial Subway Series 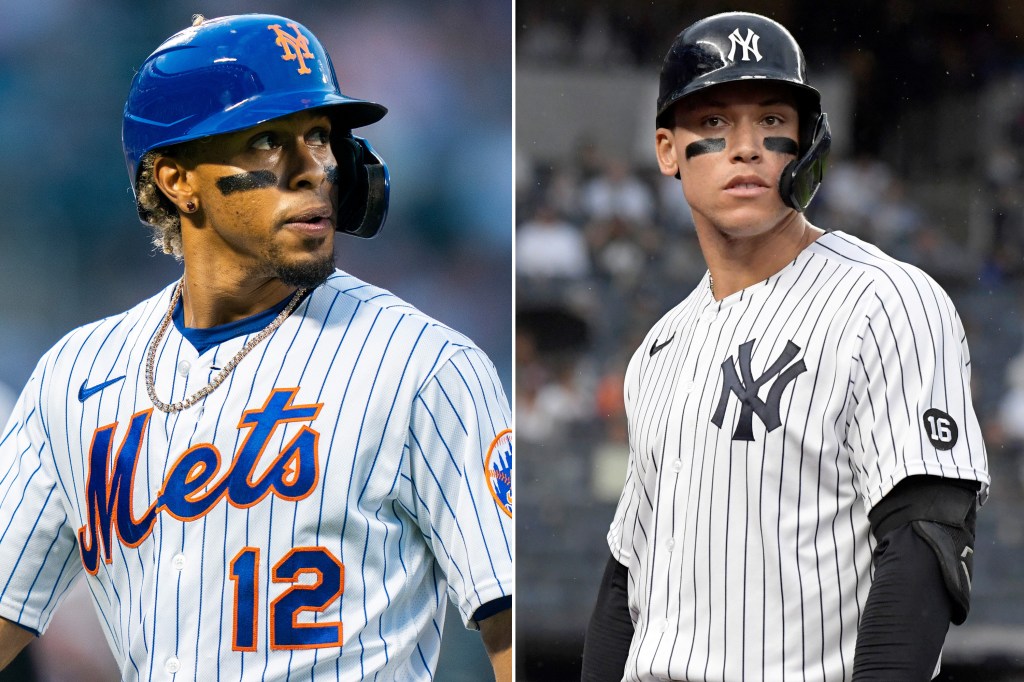 
The Subway Series is almost always intense, creating a playoff-like atmosphere when the Mets and Yankees share a diamond. The latest version may be heightened, considering the significance of these three games for both teams.

The Yankees are narrowly hanging on to an AL wild-card spot and have hit the skids since their 13-game winning streak. The Mets are on the outskirts of the playoff race, trailing the NL East-leading Braves by four games entering Thursday. Both teams need a big weekend to set themselves up for a big finish. Throw in the festivities on Saturday for the 20th anniversary of 9/11, and this figures to be an emotional three days in Flushing.

The Post’s Zach Braziller breaks down how the Yankees and Mets matchup, with so much at stake for both teams:

Getting on base: These were supposed to be two of the better offensive teams in the sport, lineups flooded with power and depth. Instead, they both have disappointed. They are both ranked in the bottom third of MLB in runs scored and batting average; the Yankees are 20th in runs and 24th in batting average, and the Mets are 28th and 20th, respectively. They are both offensively challenged, significantly let down by a high-priced infielder. After returning to The Bronx on a six-year, $90 million deal, DJ LeMahieu hasn’t lived up to expectations, with a .266/.346/.362 slash line and a meager .708 OPS. Francisco Lindor, meanwhile, has struggled in his first as a Met, managing just a .226 batting average and .698 OPS after receiving his blockbuster $341 million, 10-year contract. The absence of Brandon Nimmo (hamstring), the Mets’ on-base machine and one of their top hitters, is a significant loss.

Power: The Yankees own a major edge in this category. Aaron Judge and Giancarlo Stanton have combined to hit 56 home runs, while Gary Sanchez, Anthony Rizzo, Luke Voit and Joey Gallo are all dangerous long-ball threats. As a team, they have hit 176 homers, 23 more than the Mets who have been carried by Pete Alonso’s 32 home runs. He hasn’t received much help in the power department. Utility man Jonathan Villar is second on the team with 18 and is followed by part-time outfielder Kevin Pillar (14). Michael Conforto, Dominic Smith and Jeff McNeil have combined for just 29 homers, emblematic of their forgettable seasons.

Neither team will run too often, although the Mets have turned up their aggressiveness in recent weeks, trying to push the envelope to jump-start a dormant offense. That approach hasn’t worked well for the Yankees, who have made 46 outs on the bases, tied for the third-most in baseball. By comparison, the Mets have made just 33 outs on the bases, trailing only the Cardinals’ 30.

Infield: The Yankees improved their infield defense with the trade-deadline acquisition of Rizzo, and they were better while Gleyber Torres was out with Bronx native Andrew Velazquez at shortstop. Torres has struggled since his return and was benched during the Blue Jays series this week. The Mets, meanwhile, now possess an elite middle infield with Lindor and buddy Javier Baez up the middle, and Villar’s emergence as the everyday third baseman is an improvement upon the shaky J.D. Davis at the hot corner.

Outfield: Like the addition of Rizzo, getting Gallo improved the Yankees’ defense. Judge is a strong outfielder, and will likely be in center field for this series, flanked by the less mobile Stanton in right. All three have strong arms. The Mets have moved McNeil to left field since Lindor returned from his oblique injury, and he has held his own there. Pillar has lost a step at the age of 32, but is still a quality outfielder, and has been playing every day in center field since Nimmo got hurt.

Smith and Davis have become backups for the Mets due to underperformance, which does give manager Luis Rojas quality pinch-hitting options. Without the designated hitter, Luke Voit will be the Yankees’ key bat coming off the bench. Torres, if his defense keeps him sidelined, could be another quality option, and speedy reserve Tyler Wade could be a factor stealing a base.

Rotation: No Jacob deGrom or Marcus Stroman for the Mets. No Gerrit Cole or Jameson Taillon for the Yankees. Injuries and timing will deprive fans of some of the best arms these teams possess. Instead, the home team will send out regressing All-Star Taijuan Walker on Friday, rookie Tylor Megill on Saturday and disappointing veteran Carlos Carrasco on Sunday. The Yankees will counter with Jordan Montgomery, Corey Kluber and a pitcher to be determined. Expect a lot of offense, even from these challenged lineups.

Neither closer inspires much confidence these days. Mets right-hander Edwin Diaz has blown six saves this year — including two in a row against the Nationals last weekend — while Yankees flamethrower Aroldis Chapman’s season has been a roller coaster, having allowed runs in consecutive outings and notching a career-worst 1.44 WHIP. Aaron Boone’s team will be without its top reliever, Jonathan Loaisiga (shoulder), a major blow to its bullpen. The Mets’ high-leverage setup men — Seth Lugo, Aaron Loup and Trevor May — have been more trustworthy than Diaz, particularly Loup and his 1.09 ERA.

A sizable chunk of both fan bases would like to see new managers in their respective dugouts next year. Despite myriad issues, Boone does have the Yankees on a 91-win pace, and with a light schedule ahead, the playoffs still seem realistic. Rojas received credit for keeping the Mets afloat during the middle of the season as they were hit by a number of injuries, but as his team has foundered, his decisions have come under question on an almost nightly basis, particularly his habit of managing for the following game rather than the one being played.

Both teams should be desperate. Both teams should feel like their respective seasons are slipping away. Both teams need to pull out all the stops each night. The Mets will be at home, which could provide a slight edge, and they have a lot of ground to make up, providing extra urgency.

Bobby Valentine: Mets-Braves set tone that ‘America was together’ after 9/11