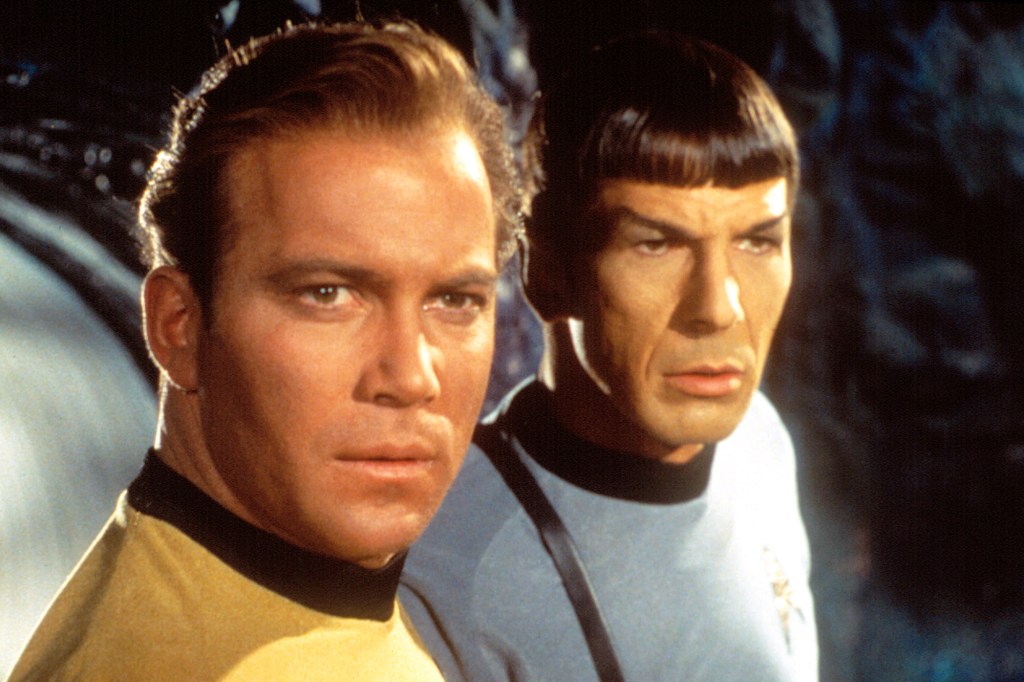 
Are the core values of “Star Trek” too far out of this world?

The hit television and film franchise — which marks the 55th anniversary of the original series premiere with Star Trek Day on Wednesday, Sept. 8 — has long preached the progressive mantras of inclusivity, respect and friendship. But for William Shatner, who played Captain (and later Admiral) James T. Kirk, and the late Leonard Nimoy, as Vulcan science officer Mr. Spock, friendship wasn’t always a stellar success.

In a Paramount+ interview to tease remastered versions of the first four franchise films — “Star Trek: The Motion Picture,” “Star Trek II: The Wrath of Khan,” “Star Trek III: The Search for Spock” and “Star Trek IV: The Voyage Home” — Shatner opened up about his and Nimoy’s five-decade bond since their show first debuted in 1966.

“Leonard was my dearest friend. I loved Leonard Nimoy. We had success, envy, anger, love, passion,” Shatner shared about his friendship with Nimoy, who died in 2015 at age 83.

“I loved Leonard as my dearest brother,” he continued. “When he died, a part of me died.”

Their on-screen portrayals even paralleled that. In his tear-jerking death scene in “The Wrath of Khan,” Nimoy’s Spock faced a sorrowful Admiral Kirk and proclaimed, “I have been — and always shall be — your friend,” before passing to the great Vulcan beyond with a slump (and uttering his iconic phrase, “Live long and prosper”).

However, “always” was apparently not the case for Shatner and Nimoy.

Nimoy’s son, Adam Nimoy, told The Post in 2016 that their relationship had its supernova moments, despite Shatner’s starry picture.

“I think Bill and Dad loved each other, but they had their ups and downs,” Adam, 65, said.

Shatner even missed his supposed BFF’s funeral, saying he felt “really awful” about it but had a prior charity commitment to fulfill instead.

And Shatner — who at 90 is still working his butt off — revealed in a 2016 book, “Leonard: My Fifty-Year Friendship with a Remarkable Man,” that he and his oft-castmate were estranged in the last five years of Nimoy’s life. In the book, Shatner chalked it up to trying to include Nimoy in a “Star Trek”-related documentary without his permission.

In an interview with The Hollywood Reporter that year, Shatner referenced the doc but ultimately claimed ignorance about their rift. “I don’t know why he stopped talking to me,” calling the turn of events “sad” and “permanent.”

He added that he had but one trinket with which to remember his friend.

“I have nothing of Leonard’s. I have no ‘Star Trek memorabilia at all.’ I have a picture of him and me laughing in my office,” a seemingly forlorn Shatner told THR. “I have the echo of the laughter that we had between us but that’s all that I have.”

Of course, Nimoy wasn’t the only person who has reportedly scorned Shatner.

“Star Trek” actor George Takei, 84, has famously carried a grudge with his former co-star for decades and has called him “very self-centered.” Shatner, meanwhile, has again claimed ignorance of their dustup, saying of Takei: “There’s such a sickness there, it’s so painfully obvious that there’s a psychosis there. I don’t know what his original thing about me was, I have no idea.”

And 84-year-old actor Walter Koenig, who played Ensign Pavel Chekov in the original series, declined an interview with The Post’s TV Editor Michael Starr for a biography of Shatner that he was writing in 2016. “Unless you will have several photos in your book showing Mr. Shatner having sex with a horse, I must politely decline,” Koenig tartly replied to Starr’s request. Shatner also reportedly blocked Starr on Twitter and “put the kibosh” on an interview with one of the actor’s longtime friends.

More recently, the family of the late series creator Gene Roddenberry is still miffed with a December 1986 “Saturday Night Live” skit in which Shatner — playing a disgruntled himself at a sci-fi convention — told “Star Trek” cosplayers to “get a life … For crying out loud, it’s just a TV show. I mean, look at you. Look at the way you’re dressed. You’ve turned an enjoyable little job I did as a lark for a few years into a colossal waste of time.”

In an interview timed to Star Trek Day and the show’s 55th anniversary, Roddenberry’s son, Rod, last week told the Hollywood Reporter that while he didn’t “condemn” it and called it “all fun,” he also “never really appreciated that skit because I think it was demeaning to the fans,” adding that it was “disrespectful.”

Diehard Trekkies, however, may not even care anymore.

For the show’s anniversary — and the franchise’s still-starstruck fan base — Paramount+ has lined up a two-hour livestreaming celebration — kicking off at 8:30 p.m. ET Wednesday from LA and hosted by “Star Trek: The Next Generation” alum Wil Wheaton and Mica Burton, daughter of “Next Gen” actor (and would-be “Jeopardy!” guest host) LeVar Burton. The event will include more than a dozen panel discussions and other events with cast members and creatives from the franchise and will feature “surprise appearances, announcements and reveals.” (Count on previously unseen clips and trailers for upcoming shows.)

In addition, for every person who tweets using the hashtag #StarTrekUnitedGives that day, $1 will be donated by Paramount and the Roddenberry Foundation to organizations that “do the real-world work of championing equality, social justice, the arts and innovation.”

Star Trek Day panels will include: