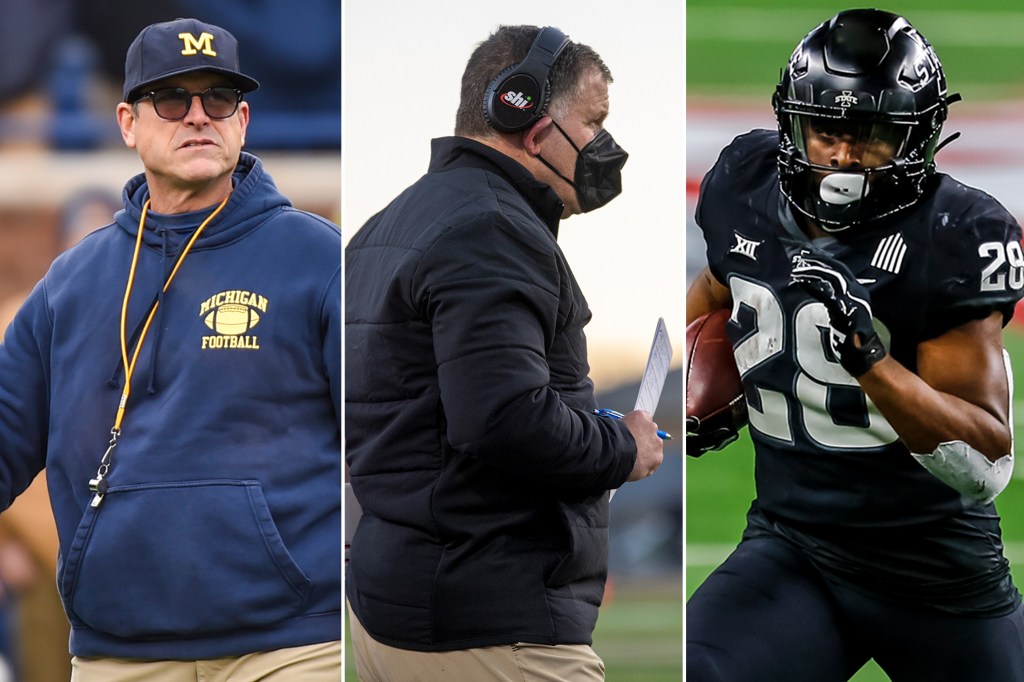 Breaking down the top five predictions and storylines for the 2021 college football season from the Post’s Zach Braziller.

The fifth time will be the charm. After failing to advance in the College Football Playoffs in their first four visits, the Sooners not only reach the championship game, but win it all. Oklahoma finally has a defense capable of standing up to Alabama and Clemson, and quarterback Spencer Rattler follows up a sensational regular season with a memorable playoff to bring a national title back to Norman for the first time since 2000.

More than any other Group of Five school in the playoff era, Cincinnati will prove it belongs by knocking off Indiana and Notre Dame on the road, and going undefeated in the AAC. It still isn’t enough to earn a bid, as the Bearcats’ two victories lose significance by December, and the lack of a top-10 win is predictably used against them.

Hall runs to the Heisman

Last year, a receiver. This year, a running back. Iowa State’s Breece Hall claims the Heisman Trophy, the year after Alabama wide receiver DeVonta Smith took home the honor. Hall will rush for well over 2,000 yards, setting a school record, and though the Cyclones will fall short in a pair of narrow losses to Oklahoma, he will excel in those defeats to sway voters.

Big Ten left out of playoff

It will be apparent early on the conference doesn’t have a true playoff contender. Ohio State falls at The Horseshoe to Oregon. Indiana drops a home game to Cincinnati. Wisconsin loses to Notre Dame. Michigan is overwhelmed by Washington. Penn State drops a heartbreaker to Auburn.

Greg Schiano’s first season in his second go-around at Rutgers was an unexpected success, a 3-6 record that included three losses by a single score. Year No. 2 will be even better. There is more talent, three winnable non-conference games, and a relentless culture has been established for the Scarlet Knights. Rutgers goes bowling, after finishing 6-6, for the first time since 2014.

There’s enough pressure to play quarterback at Clemson, Alabama and Ohio State as it is. Now consider that sophomores D.J. Uiagalelei and Bryce Young, along with redshirt freshman C.J. Stroud, are replacing top draft picks and champions at their respective schools. It will be fascinating to watch how all three perform under a microscope, unlike anything the three big-time prospects have ever experienced.

It’s been less than two months since college athletes were allowed to start making money off their name, image and likeness. A number of college football players have already cashed in. Now that the season is here, it could take off even further. Companies will want to be associated with a hot player having a big year. Let’s say Ole Miss pulls off an upset of Alabama — the hero of that win could end up profiting immediately. There is also the issue of team chemistry and how coaches handle this new dynamic.

LSU and Penn State must respond

Ed Orgeron won a national championship in 2019 at LSU, and James Franklin produced three 11-win seasons from 2016-19 at Penn State. Both went through nightmarish campaigns a year ago. LSU struggled to its worst season, going 5-5, since notching a 3-8 mark in 1999, while Penn State (4-5) had last suffered a losing year in 2004. Neither coach is in danger of losing his job, but both need to put 2020 behind them to avoid further scrutiny and be able to dismiss the lost year as an anomaly.

This will be much more of a normal season. Everyone is starting on time. There will be sellout crowds. But the virus isn’t going away. Positive cases are increasing. Key players will miss important games. There may even be forfeits, since several conferences have said they will not allow games to be rescheduled if teams don’t have enough players due to the virus.

Heat turns up on Harbaugh

For the first time since Jim Harbaugh’s first season in Ann Arbor, Michigan enters the season unranked. It is devoid of hype, picked to finish fourth in the Big Ten East by the league’s media members after last year’s dismal 2-4 COVID-19-shortened campaign. With five games against ranked teams, including a Week 2 matchup with Washington, Harbaugh’s job security will be a season-long topic. Forget about his four-year contract extension — his salary was reduced significantly, making a buyout more tenable.