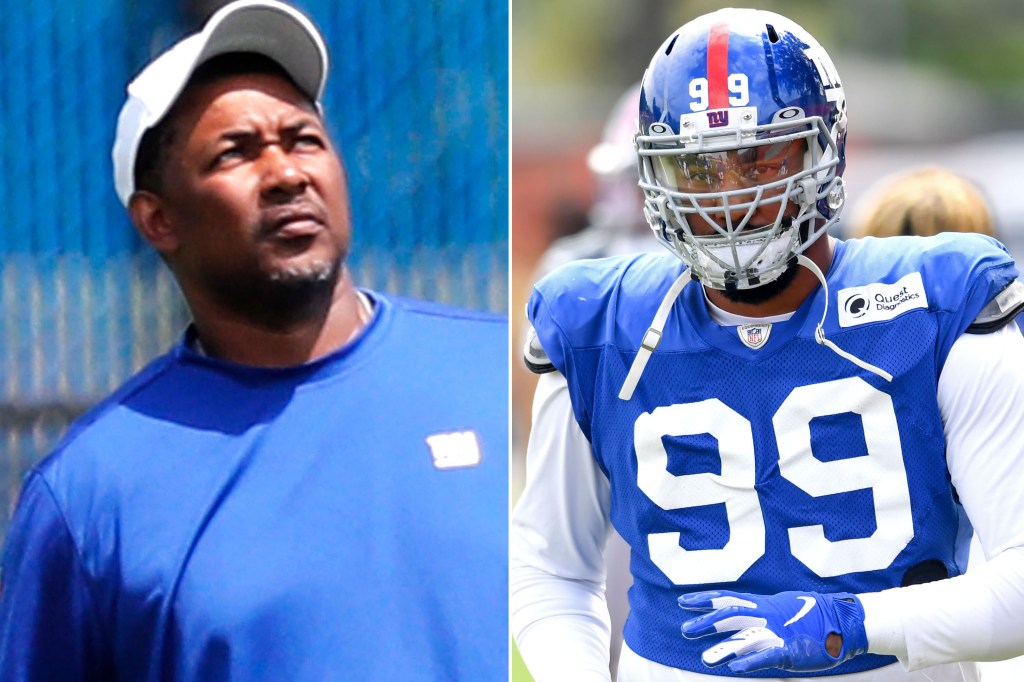 
Once again, the Giants most accomplished pass rushers are Leonard Williams and … defensive coordinator Patrick Graham?

After the Giants cut Ifeadi Odenigbo at a sunk cost of the $1 million guarantee on his free-agent contract, Williams is the only defensive player with more than five sacks in any season of his career. So, the Giants are back to relying on recent draft picks Lorenzo Carter and Oshane Ximines as well as rookies Azeez Ojulari, Ellerson Smith (injured reserve) and Quincy Roche (added off waivers from the Steelers) on the edge.

In other words, barring a breakout season, the onus is on Graham — nicknamed “The Computer” by Williams — to find ways to generate a balanced pass rush around Williams like last year.

“When Lawrence Taylor walks back in here, we won’t worry about scheming anything: We’ll just go ahead and let him rush off the edge,” coach Joe Judge said. “But right now, we’re relying on all 11 to do their jobs.”

So, middle linebackers Blake Martinez, Reggie Ragland, Tae Crowder and Carter Coughlin are expected to get in the sack column. So are defensive linemen Dexter Lawrence, Austin Johnson and Danny Shelfton. Blitzing safeties Logan Ryan and Jabrill Peppers will get opportunities.

“It has to be a combination of scheme and the player doing their job. And not just [one] player — all the other 10 guys doing their job, as well,” Williams said. “I rely on those back guys to cover their receivers and their alignments to have time to rush, just as much I rely on Pat Graham to call the right calls in the right situation, just as much as Pat relies on me to beat my one-on-one [matchup] when the time is right.”

Odenigbo, a career 4-3 defensive end who had seven sacks for the 2019 Vikings, looked ill-fitted for Graham’s 3-4 base defense. But the Giants wouldn’t have moved on if not for rising confidence in Carter and Ximines, both of whom missed the majority of last season with injuries, behind closed doors.

“A lot of the edge guys went down last year — that’s what caused me to play defensive end a lot,” said Williams, a tackle. “I’ll probably still rotate at that position, but Zo’s a great player and ‘X’ is a great player.”

Wherever Williams was lined up, whatever he was doing on the way to an 11.5-sack season and a new contract paying him $21 million annually, more is needed. The Giants tied for No. 12 in the league with 40 sacks last season but no other player had more than four (Lawrence and the departed Kyle Fackrell).

“Something I’m working on the most right now is the same thing I did last year that helped me get such a good season: Just ignoring noise,” Williams said.

“Guys were doubting me last season, and I was able to ignore them and focus on my process and what would make me a better player. It’s the same thing I have to do now when people are praising me and expecting great things out of me. I just have to keep ignoring the noise.”

On the same day Giants Ring of Honor pass-rusher Justin Tuck was part of a group of former teammates who surprised Hall of Fame pass rusher Michael Strahan on “Good Morning America” with the date of his Giants’ jersey retirement ceremony, it was strange to hear how much of the pass-rush plan nowadays is collective.

“We have a lot of faith in the guys on our roster right now,” Judge said, “and in the progress they’re making.”

No more just penciling in Taylor, Strahan, Tuck, Osi Umenyiora or Jason Pierre-Paul for one sack every game. Until he does it again, Williams, who had a half-sack over 15 games in 2019, is not in that echelon.

“Can scheme help you? It can, but it comes down to individual execution,” Judge said. “In terms of can you out-scheme another team, we don’t want to rely on that all the time. We just want to make sure we put our players in the position to play to their strengths. Sometimes it may look like some kind of scheme, but for us week by week is a different plan.”