Giants vs. Washington: Preview, predictions, what to watch for 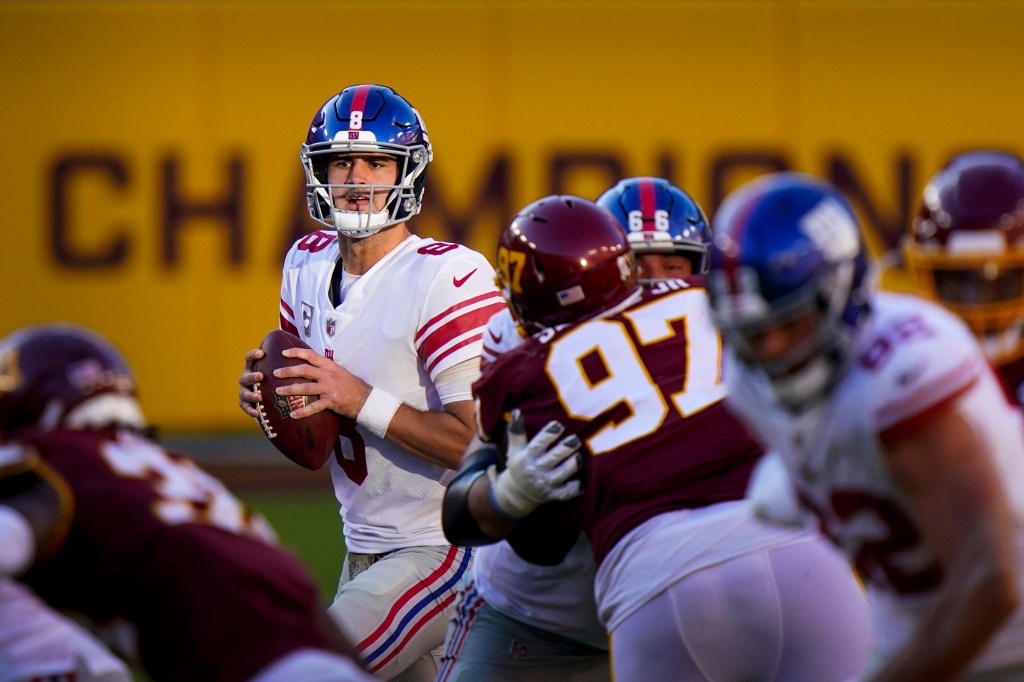 The Washington offensive line did not protect its quarterbacks with much gusto in the season-opening loss to the Chargers. The Giants must take advantage of Cosmi, a rookie second-round pick. Cosmi allowed one sack and three quarterback hits, but he was going against Joey Bosa. The Giants don’t have a Bosa. Carter and Ximines were quiet in their 2021 debuts, but Ojulari did get his first career sack, and the rookie needs to be let loose.

Monday is one year to the day that Saquon Barkley ripped up his right knee in Chicago. One full calendar year. “Thank you for making me aware of that,” Barkley said, not sounding all that appreciative. Since then, nothing has come easy for the franchise running back, and his return to the field last week was uninspiring: 10 rushing attempts, 26 yards, one reception for 1 yard. He was rusty. Four days later, what can the Giants realistically expect to get out of Barkley? “For me, it’s just take it and roll with it, learn from it, move on, get the rust out and get out there on Thursday against a divisional opponent and try to come out with a win,” Barkley said.

There is no mystery why Washington has what can be considered the NFL’s best defensive line. For four straight years, its first-round pick was used on a defensive lineman, starting with Jonathan Allen (17th overall in 2017) and continuing with Daron Payne (13th in 2018), Montez Sweat (26th in 2019) and Chase Young (2nd in 2020). Young, a monster, mostly lines up on the left side, meaning right tackles Nate Solder and Matt Peart must be on alert, while left tackle Andrew Thomas gets to work up a sweat vs. Sweat. The answer? Get the ball out quick. Washington last week managed only two sacks and seven pressures in 52 pass-rush snaps, as Chargers quarterback Justin Herbert got rid of the ball in an average of 2.39 seconds.

Most Giants fans were incredulous when Daniel Jones was taken with the No. 6 pick in the 2019 draft. It has been an up-and-down relationship ever since, and consider this a “down” time after Jones lost a fumble in the season opener. He certainly has his critics and he tries to keep out the noise. “I mean, I certainly don’t seek it out,” Jones said. “I don’t pay attention to much of it, but part of the job is being able to handle it and I think I certainly can. I’m not sure it affects my day-to-day preparation or how I go into a game.”

He was designated as the “quarantine quarterback” at the end of last season, as Washington needed some practice-squad insurance at the position and Taylor Heinicke, taking online classes at his old school, Old Dominion, answered the call. Heinicke has been with four NFL teams and has two starts, one with the Panthers in 2018 and one last winter, when he almost sparked a victory over the Buccaneers in an NFC wild-card game. Heinicke came off the bench and completed 11 of 15 passes for 122 yards, replacing injured Ryan Fitzpatrick last week. “I see a gunslinger, a guy who’s not afraid to take chances,’’ said Giants cornerback James Bradberry, briefly a teammate of Heinicke in Carolina.

We are in this mode now: Take the Giants only after they show they can win a game. This would seem to be a good spot for them, as long as they can get Barkley and Devontae Booker going in the ground game to relieve the stress on the pass protectors. Figure this is low scoring. Figuring the Giants coming out on top is weekly peril.