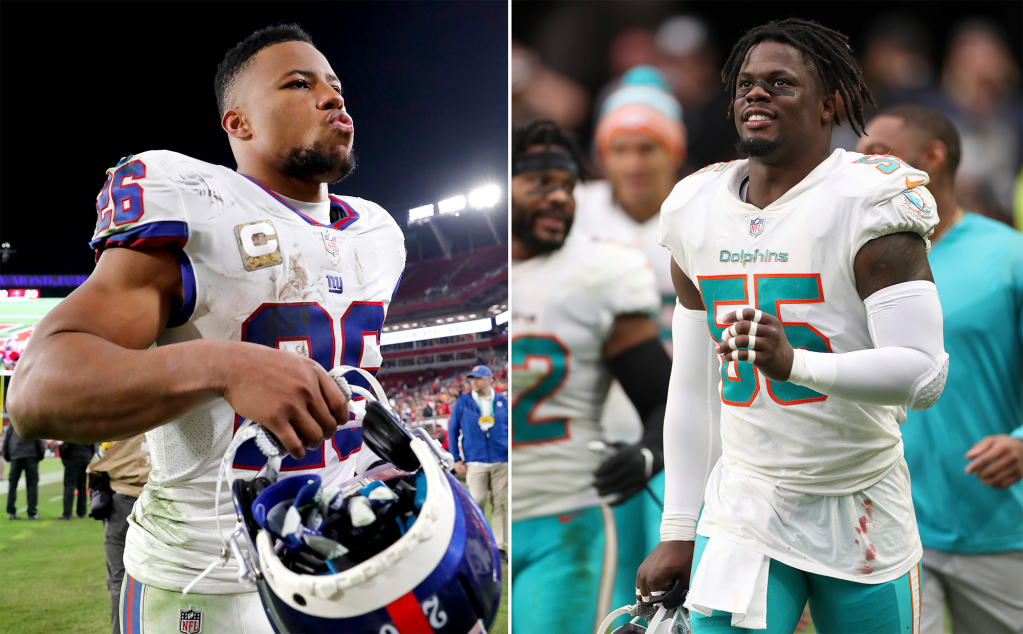 
An inside look at Sunday’s Giants-Dolphins Week 13 matchup at Hard Rock Stadium in Miami:

This is not a one-on-one duel, but these two players will be seeing and feeling a great deal of each other. Baker leads the Miami defense with 63 tackles and is showing why he received a three-year, $37.5 million contract extension. Barkley is getting healthier, but he is not finding his rhythm. Perhaps a game on nice, lush grass will help him get going. The Dolphins are 10th in the NFL in run defense, allowing 104.9 yards per game. Barkley last week had nine runs for one or fewer yards versus the Eagles. That is unacceptable for a running back and an offensive line.

The Dolphins are on a major run. The Giants? They won last week. Heck, sometimes you feel like going with something that does not make complete sense, right? The Giants are due for some big plays, and this gambling defense they are up against might allow for those plays to happen. It is not as if Daniel Jones, who is out, was lighting it up. Some fun in the sun for a change.

The heat is on: The Giants are not accustomed to this. The temperature at kickoff is forecast to be 82 degrees and it will be muggy, with a 20 percent chance of rain at some point during the game. Conditioning is always a factor when a team from the Northeast plays down south this late in a season.

“Having lived down there and having coached down there, it’s definitely something you’ve got to pay attention to,’’ defensive coordinator Patrick Graham said. “We’re not playing the weather, so it’s about how we play the game and how we execute. But, you’ve got to make sure you’re staying hydrated, make sure guys understand that it’s going to be a little bit of a weather change.’’

Same old same old? There is no doubt Jason Garrett, the former and fired offensive coordinator, was often hamstrung in what he could call because he knew the deficiencies of the offensive line. Freddie Kitchens, the new play-caller, has added some new wrinkles — get the ball in the hands of Kenny Golladay and Saquon Barkley as often as possible, for starters — but the line is the line.

Check the calendar: The Patriots recently completed their sixth unbeaten month of November under Bill Belichick. Two of his former assistants are also at their best in November. Joe Judge is 6-3 in two seasons and Dolphins coach Brian Flores is 10-3 in three seasons. Flores is 17-6 in games played after Halloween. Let us see what December brings.

“There’s a lot of things you have to, from a foundational standpoint, that you have to have in place in order to make certain adjustments later in the season that you need to make,’’ Flores said. “Every team deals with that, but in order to make those you just have to, on a day-to-day basis, try to get better.”

Vet returns: Logan Ryan missed the past two games on the reserve/COVID-19 list. Without him on the back end, Xavier McKinney and Julian Love more than held down the fort, and the Giants now have their top three safeties available.

“We’ve got a lot of young guys on our team, on our defense especially, that have just grown up,’’ Ryan said. “My safety room, the guys, pups, they’ve grown up and they’re doing great. Zay [McKinney] is playing as good as any safety in the league right now. We’re all chasing him, and Julian’s exactly what Julian Love is, the ultimate player that can play any role, any piece that you need to build a team.’’